After years of growth, the offshore rig supply, including rigs under construction, declined in 2015 by 43 units to a total of 1,145 drill barges, drillships, jackups, semisubmersibles, submersibles, tender-assist units, and Arctic rigs. 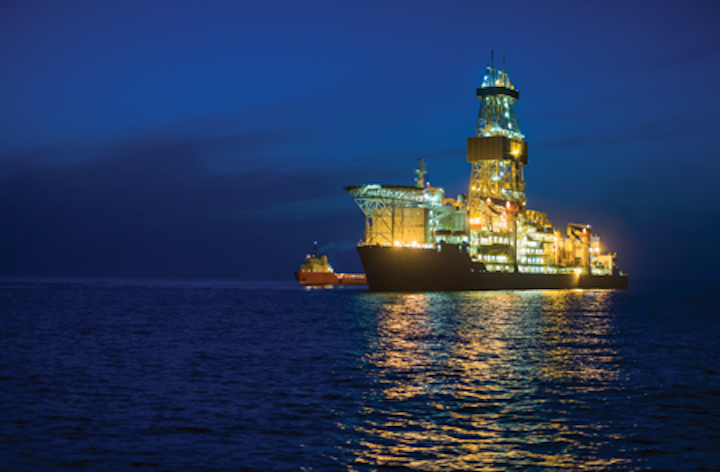 After years of growth, the offshore rig supply, including rigs under construction, declined in 2015 by 43 units to a total of 1,145 drill barges, drillships, jackups, semisubmersibles, submersibles, tender-assist units, and Arctic rigs. This was a direct result of an oversupply problem that began to show itself even before oil prices collapsed in the second half of 2014. New rig orders dropped off steeply, while attrition became a hot topic.

Since the beginning of 2014, 66 units have been removed from the fleet for various reasons, such as scrapping, conversion to a non-drilling unit like a mobile offshore production unit, or simply being retired from the active fleet. Of these 66, 25 were removed in 2014, and the rest occurred in 2015. However, this is not expected to be the end of the scrapping session, as a delicate balance between supply and demand in a relatively stable oil price environment has not yet been achieved. With many oil analysts in agreement that the crude price has not yet reached bottom, it makes it tougher on rig contractors to determine how many rigs need to be culled from their portfolios.

At the end of 2014, 180 rigs were under construction. Fast forward one year and 184 units were under construction at the end of the year. As rigs generally take multiple years to build, many of these were rollovers from the year before. A total of 29 rigs were delivered in 2015. Many more were previously scheduled for delivery last year, but due to worsening market conditions throughout the year, several had their delivery dates renegotiated and delayed. Still others that were either finished or nearly finished had their shipyard contracts canceled by rig contractors unable or unwilling to accept delivery. However, as these rigs were built to completion and remain part of the active fleet, albeit without a dedicated rig owner and manager, their shipyard contract cancellations do not affect the overall numbers in the accompanying table, except that the totals for specific managers that canceled rigs will not be as high as they would have been otherwise.

The biggest drop from the table is the working count, as operators not only terminated charters, but also failed to sign as many contracts as had been expected. Numerous rigs rolled off contract without follow-up jobs in hand and most of these remain idle as the new year began. Since the end of last year, the working count has dropped by 161 units to 519. That being said, as a whole, the 10 largest contractors went from having 47.8% of the working rigs to 45.3%, maintaining their dominance, as at present there are over 170 different rig managers worldwide.

As expected, the rig manager with the biggest drop in its fleet is also the largest manager - Transocean. The company downsized from a fleet of 86 in 2014 to 74 by the end of 2015. In terms of fleet percentage though, Diamond Offshore slimmed down nearly 20% from 2014, while Transocean’s drop amounted to about 14% from its rig portfolio. Of the other top 10 managers, only one did not have any change - Shelf Drilling stayed at 39 units, while China Oilfield Services Ltd. (COSL) is the only manager to have increased the size of its fleet, going from 46 to 47 units following the change of manager for the rigNanhai VI. COSL has been the owner of this rig since 2003, but Maersk was acting as manager while it worked off Australia.

While there were no changes to the companies that made it onto the top 10 list this year, the biggest shake-ups are the fall of Diamond from fifth to seventh place following its rig reductions, switching spots with Shelf Drilling, while Paragon Offshore remained in between in sixth position; and Hercules’ fall from the eighth spot to tenth, boosting Noble and Rowan up by one place each to eighth and ninth, respectively. However, in 2017/2018, the offshore rig industry should begin seeing more consolidation among rig contractors as sales of both individual rig and entire companies will become necessary due to sustained low demand in response to continued low oil prices, and those contractors with cash on hand will be able to take advantage of the market and its competitors. Some rig managers are likely to be forced out of the market altogether - in particular those with little to no experience who were hoping to cash in on the high day rates the industry was experiencing the past few years. Once the recovery begins, we will see a leaner group of rig managers with higher-end rigs in their portfolios.

In terms of region, Latin America lost the most rigs, dropping 17 units over the total from 2014. This was the direct result of national oil companies PEMEX (Mexico) and Petrobras (Brazil) reducing their contracted rig counts, combined with both of these countries not being long-term stacking locations for idle rigs. In turn, this helped feed the increase that took place in the US Gulf of Mexico, which rose from 121 rigs to 125, despite over a dozen rigs being retired or scrapped from the region. At the time of writing, 68 of the US Gulf’s rigs were in various idle states (i.e. hot-, warm- or cold-stacked), proving the popularity of the region as a parking spot for rigs without work. In 2014, the average contracted count in the US Gulf was 77, compared to 59 a year later. The utilization rate for marketed rigs fell from 89.1% to 79.2%. 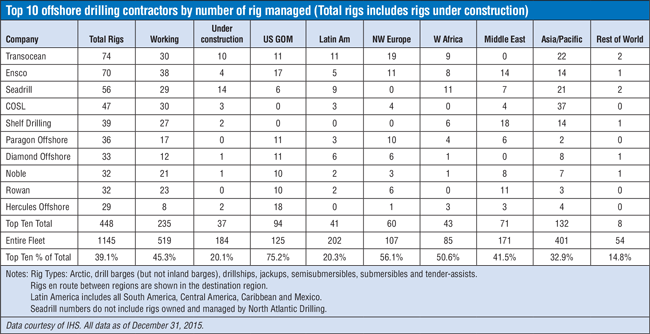 One region that has not felt the decrease in demand as severely as other regions is the Middle East. Its fleet rose from 167 in 2014 to 171 at the end of 2015. The region had eight units under construction at the end of both 2014 and 2015. Also for each year, demand averaged approximately 130 units. This is a pure-play jackup region, as all rigs working in the region at present are jackups. It is also a region that primarily awards long-term charters, which has helped insulate it from declining utilization. More importantly, the biggest country user is Saudi Arabia, which has 44 units under contract. In the midst of this global downturn, Saudi Arabia has determined not to decrease its production in an effort to maintain its market share. This has been good news for drilling contractors that have rigs contracted in the Middle East, although there have also been numerous rate renegotiations that resulted in lower-than-originally-contracted adjustments.

Northwest Europe has also not fared too poorly so far. Its fleet grew about six units over 2014. However, the average contracted count fell from 93 to 87. Average utilization for marketed rigs in 2014 was 98.9% versus 91.3% in 2015. Over half of the region’s fleet is supplied by the top 10 rig contractors. Similarly, the top 10 also provide more than half the fleets in the US Gulf and West Africa. They are less dominant in Latin America, Asia/Pacific, and the Middle East, where local players are often given preference over outside companies.

Interestingly, some of the largest rig contractors have reduced their presence in regions that are not the biggest users of offshore drilling rigs. The Rest of World section in the accompanying table shows a reduction in the presence of the top 10 from 27.1% at the end of 2014 to 14.8% by the end of 2015. That category includes offshore Alaska, which recently saw Shell pull out following its unsuccessful campaign and subsequent decision to not pursue additional exploration work in the region for the foreseeable future. Other regions that had reductions include the Mediterranean and Black Sea sector, and the Australia/New Zealand region. In particular, frontier areas are at higher risk for a pullback in activity, as oil and gas companies are more likely to cut exploration work before development work when crude prices are low.

The expectation is that by the end of 2016, many more rigs will have been scrapped and very few new orders will have been placed. Year-end should also see rigs begin to change hands as some rig contractors will fall under the pressures of the current low oil price-low rig demand scenario, while those with available resources will take the opportunity to high-grade their fleets at attractive prices. Notably, Hercules Offshore recently emerged from the bankruptcy it filed in 2015, while Paragon Offshore has retained advisors for guidance on strategic alternatives related to its capital structure and has recently announced that it has elected to defer an interest payment while it continues to engage in discussions with its debtholders related to its strategic alternatives.