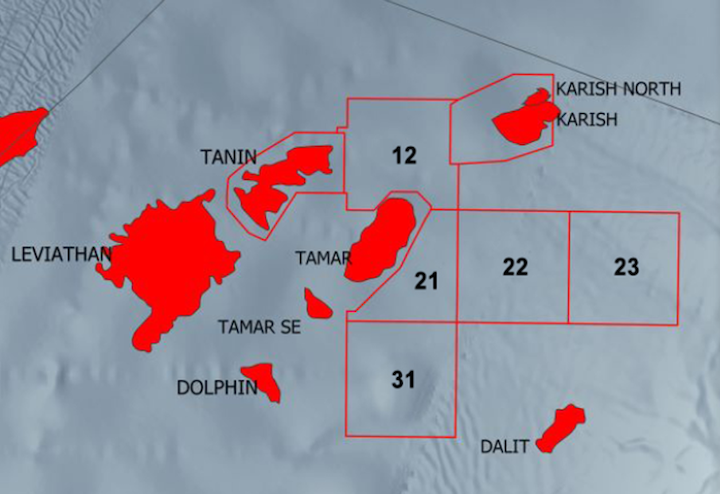 Zeus is in block 12, between the Karish and Tanin leases, offshore Israel.
(Courtesy Energean)

This follows completion of side track appraisal operations at the well, which have confirmed a best estimate recoverable resource of 0.9 tcf of gas and 34 MMbbl of light oil/condensate (combined around 190 MMboe).

The Energean Power is being constructed with a gas production capacity of 8 bcm/yr (775 MMcf/d).

The drillship Stena DrillMAX has now relocated to complete the three Karish Main development wells, after which the vessel will drill the Zeus exploration prospect, targeting 0.6 tcf across three reservoir intervals.

Zeus is in block 12, between the Karish and Tanin leases, and a discovery would also be commercialized through the FPSO. Energean estimates the cost of the well at $35 million, and is assessing its five remaining drilling options available under its contract with Stena Drilling.

In the Prinos Area offshore western Greece, Energean expects the Epsilon platform development to deliver first oil in the second half of next year.

Over the offshore Katakolo area, re-processing of legacy 3D seismic indicates significant upside to previously determined in- place volumes. The company will decide whether to farm down or take a final investment decision after completing its analysis.

To the north off Montenegro, processing and interpretation continued of a recently acquired 3D seismic survey.