Reduced spending for oil and gas exploration is limiting availability of quality deepwater assets for merger and acquisition deals, according to a new report by IHS Markit. 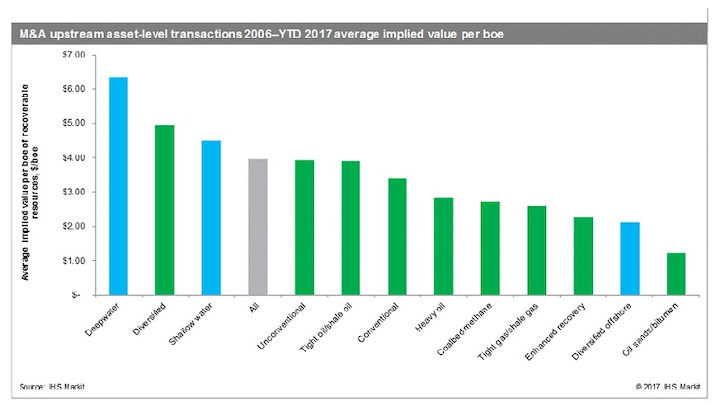 HOUSTON – Reduced spending for oil and gas exploration is limiting availability of quality deepwater assets for merger and acquisition (M&A) deals, according to a new report by IHS Markit.

This lack of deepwater asset inventory is challenging E&P operators who seek to acquire assets in order to secure development funds or de-risk their portfolios.

“Low oil prices have significantly reduced operator spending on exploration—particularly in the deepwater, which is very costly,” said Cindy Giglio, CFA, senior principal energy M&A analyst at IHS Markit and author of theIHS Markit M&A Topical Insight—Potential for change in offshore dynamics. “This means fewer deepwater discoveries are made, and even fewer world-class assets become available for sale or acquisition. As a result, those quality deepwater assets that do become available are commanding premium prices.”

According to IHS Markit, the majority of recoverable upstream oil and gas resources discovered offshore since the beginning of 2006 have been found in four key areas: Africa and the Middle East, Brazil, Europe, and the US.

Although offshore discoveries have accounted for 69% of oil and gas volumes discovered during the 2006 to 2017 (year-to-date) period, offshore has only represented 16% or approximately $300 billion, of global upstream M&A transaction value, the report found.

During this period, offshore upstream deal value was split roughly 50:50 between deepwater and shallow-water activity, though there were three times as many shallow-water deals, IHS Markit said. However, shallow-water deal activity has been in steady decline during the past five years.

During the last decade, independent public E&P companies have been the most active buyers and sellers of offshore oil and gas assets. The majority of their offshore activity has been in the shallow-water and, overall, they have been net-sellers. National oil companies (NOCs), whether wholly government-owned or partially government–owned (partial NOCs, such as Petrobras, Rosneft, and Statoil) have been net-buyers of offshore assets, especially deepwater, the report found.

“The major integrated companies (BP, Chevron, Eni, ExxonMobil, Royal Dutch Shell, Repsol, and Total) have been less active in the offshore M&A market in terms of transaction value than NOCs/partial NOCs,” Giglio said. “On a net basis, these IOCs have been divesting both deepwater and shallow-water assets. Smaller integrated companies have been divesting deepwater assets and buying shallow-water assets. Shallow-water M&A faces a dwindling number of pure-play companies, as well as competition from onshore unconventionals. The shallow-water regions have seen a decline in deals during the past five years, but interest from new buyer types is triggering a rebound in activity in certain regions.”

In recent years, Europe, primarily the North Sea, has had a re-emergence of offshore upstream M&A activity, driven by a change in buyers. Traditional buyer types have more recently been net-sellers, with new buyer types emerging to purchase offshore assets. Most of the European M&A activity has been in shallow water. About $5.7 billion, or 40% of current global shallow-water oil and gas assets for sale are in Europe.

In recent weeks, a number of deepwater assets inEurope have been listed for sale. IHS Markit estimates current deepwater opportunities in Europe at $3.6 billion, or 20% of the global deepwater assets on the market.

“Offshore M&A activity in the US has virtually stalled,” Giglio said. “In the Gulf of Mexico, this reflects the stronger interest in onshore unconventionals; more stringent regulations in the post-Macondo era; and low oil and gas prices that have reduced the number of potential M&A participants.”

In Alaska, weak commodity prices and fiscal-tax uncertainty have slowed development of new oil and gas projects, and hence, upstream M&A, according to IHS Markit. Nevertheless, the deepwater Gulf of Mexico accounts for $3.2 billion, or 17% of the global deepwater assets on the market.

Massive recent discoveries in Africa and the Middle East make this region most likely to attract offshore M&A activity in the next few years. Africa accounts for 26%, or $4.7 billion, of global deepwater assets on the market, according to the report.