Stampede TLP installed in the deepwater Gulf of Mexico 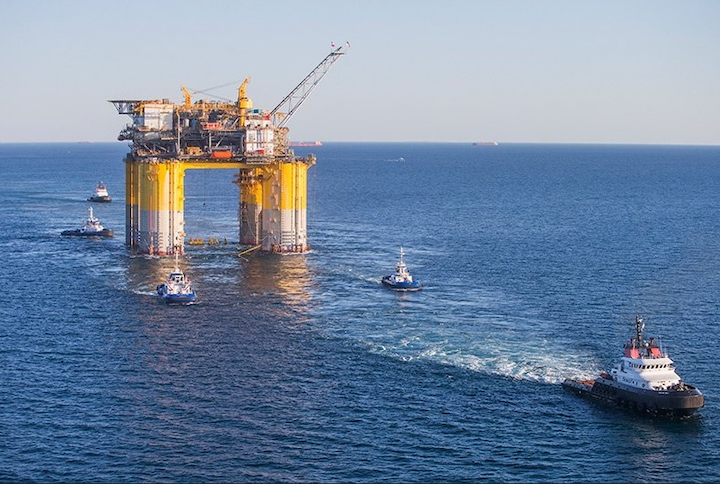 Stampede TLP heading to the deepwater Gulf of Mexico

In the first stage, Crowley’s ocean class tugboatOcean Wind and the 455-series barges 455-3, 455-5 and 455-7 worked with other contracted vessels to deliver many 300-ft (91.4-m) sections of nine 3,400-ft (1,036-m) tendons that would secure the TLP to the seabed. From there, the company’s Ocean Sun and Ocean Sky, along with several third-party tugs, towed the TLP through the Ingleside Channel to offshore waters. After a scheduled brief stop at a holding location, the convoy of vessels began the second stage of the tow in offshore waters.

The company positioned the tugs in a stationary star pattern and used their tow wires to hold the platform steady in the middle. After Hess and its installation contractor, Heerema, completed installation and the platform was made storm safe, Crowley’s assets were demobilized and returned to nearshore waters.

Discovered in 2005 and sanctioned in October 2014, the Stampede development plan calls for six subsea production wells and four water injection wells from two subsea drill centers tied-back to a TLP. Gross topsides processing capacity is about 80,000 b/d of oil and 100,000 b/d of water injection.

Hess reported in its latest results statement that hook-up activities have begun, one well has been drilled and completed, and completion operations are under way on the second and third wells. First production is expected in the first half of 2018.