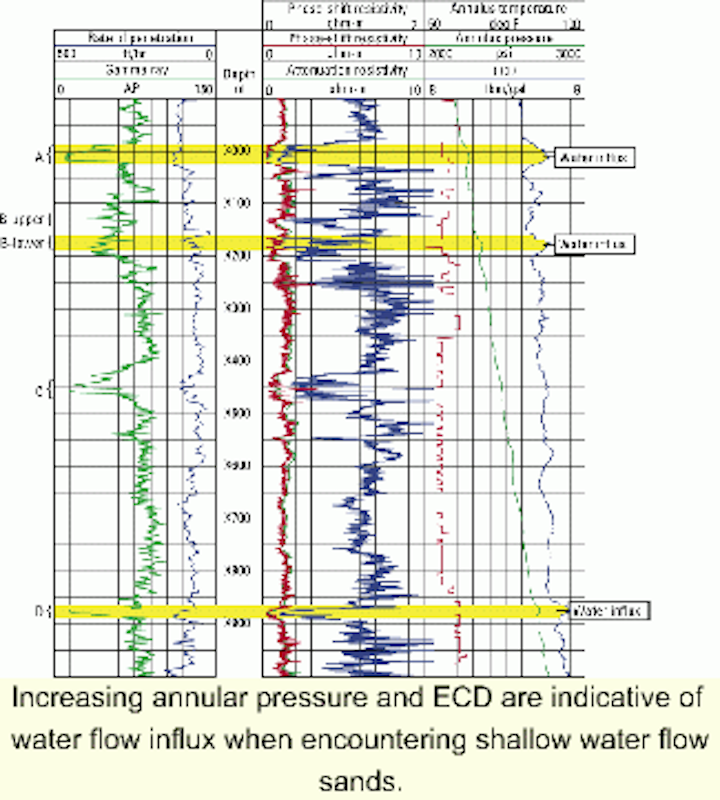 Deepwater exploration and production activity has seen significant growth in recent years. This growth can be attributed in part to the development of new technologies reducing operational costs and risks, and partly due to often-high productivity. Currently, there are about 90 publicly identified Gulf deepwater prospects.

These deepwater high production rates do not come without some serious risks. Oil companies face tremendous challenges to economically drill and complete deepwater wells. As the industry moves into ultra-deepwater, these technological and logistical challenges become increasingly difficult.

According to a recent United States Minerals Management Services (MMS) survey covering the last 14 years, shallow water flow (SWF) occurrences have been reported in about 60 Gulf of Mexico lease blocks involving 45 oil and gas fields or prospects. Problem water flow sands are typically found at depths from 950 ft to 2,000 ft, but some have been reported as deep as 3,500 ft below the seafloor. Frequently, these problems are due to overpressured and unconsolidated sands at shallow depths below the seafloor. They can lead to formation cave-in when uncontrolled water production occurs.

If an influx is severe enough, wells can be lost due to continuous water flow. Extensive washouts can undermine the large surface casing that is the major support structure for the entire well. Based on an analysis of 123 Gulf of Mexico deepwater wells, 24% could not be completed to the depth objective, 71% had flows but met objectives, and only 21% had no known problems. However, shallow water flows are not just a Gulf of Mexico issue. They have also been observed in the southern Caspian Sea, the Norwegian Sea, and in the North Sea.

There are a variety of mechanisms that lead to the formation of SWF. The four main mechanisms identified are:

In many deepwater wells, the first casing or conductor string is usually a 30 in. or 36 in. pipe. The next hole section, typically 24 in. or 26 in., is often drilled without a riser. In such top-hole sections, the drilling fluids and cuttings are returned to the seafloor, instead of being returned to the surface.

Standard operating practices in deepwater call for a remotely operated vehicle (ROV) with a camera to monitor flow coming out of the wellhead. Determining the severity of such flows using visual images can be tricky and unreliable. Accurate measurement of annular pressure provides a key tool in detecting and monitoring SWF.

Monitoring the ECD helps the operator assess both the depth and the severity of the water flow, and decide whether the flow is serious enough to stop drilling. Most conventional hydraulics models do not consider the effect of mud returns to the seafloor, and thus cannot accurately predict the expected ECD in these wells. A direct measurement of the mud pressure solves this problem.

APWD measurements can be used to identify shallow water flows, and serves as the primary indication of water flow, before any indications are seen by the ROV. Typically, there are no indications on surface when a water flow occurs, although there can be indications associated with an increase in surface torque or standpipe pressure due to increased debris in the annulus (see Hutchinson and Ward).

The following example demonstrates how the APWD tool can be used to detect the signature of SWF. In a deepwater well in the Gulf of Mexico, a water zone in sand A was encountered at X090 ft. The ECD suddenly increased in this zone as the sand was penetrated, indicating water, and possible solids entry. The rise in annular pressure and an ensuing visual confirmation of the mudline flow confirmed water entry. The increase was assessed to be manageable and drilling proceeded.

The same trends, increased ECD with a corresponding annular temperature increase, were seen in the lower section of the next sand, Zone B, and in the sand in Zone D below. The influxes were not severe, and were safely contained. Knowledge of the location and severity of the contained water influxes, and quick response to the early warning provided by the annular pressure measurement made it possible to continue drilling safely and successfully to the planned depth for this hole section.

Monitoring the real-time annular pressure will also enable heavy pills to be monitored as they pass into the annulus, and enable a dynamic kill to be performed if it is necessary (see Aldred). Real-time APWD measurements were combined with the surface standpipe pressure to monitor the process of the dynamic kill.

Severe shallow water flows can result in large hole washout and formation cave-ins. Accurate determination of hole size is critical for proper design of cementing operations. Inaccurate hole size determination can lead to unsuccessful cementing operations. This results from either underestimating or overestimating the annular volume. Extensive washouts can thus undermine the surface casing that is the major support structure for the entire well.

Historically, LWD tools are capable of computing borehole caliper. These caliper measurements have an upper limit of about 30-in. diameter. Much larger holes are used in the top-hole sections of deepwater wells and these are the sections most vulnerable to washout and SWF.

Extensive modeling of resistivity at the bit (RAB) information shows that the resistivity measurements can identify hole sizes beyond 60-in. with good accuracy. An inversion technique has been developed to compute a hole size from the measured RAB bit, ring, and deep button resistivities.

Thanks to John Lovell and Tom Bratton for their assistance on CDR and RAB caliper implementation, and I.M. Rezmer-Cooper for APWD data interpretation.