Industry gears up for opportunities in US offshore wind

While it is still early days, the U.S. offshore wind industry is rife with activity. 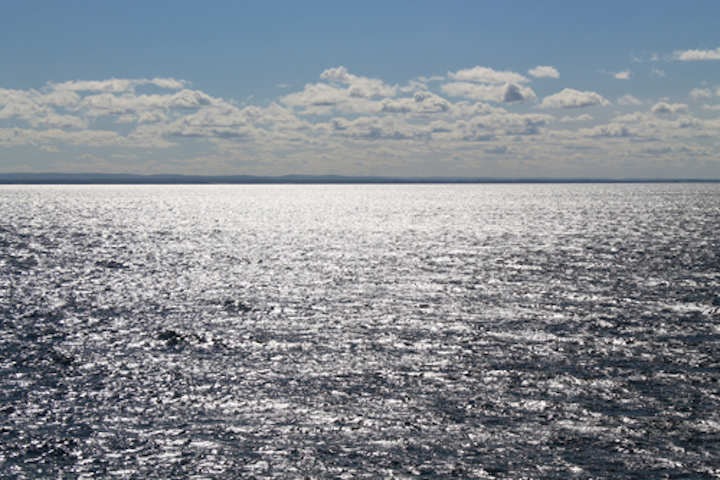 While it is still early days, the U.S. offshore wind industry is rife with activity.

Slow but steady progress continues as the U.S. offshore wind industry takes shape. As of April 2018, there were 30 active offshore wind sites in the country with three very close to beginning construction.

As is the case with many new industries projected to drive economic- and job-growth, many companies are looking to get involved. In fact, at the inaugural 2017 Offshore Wind Executive Summit, some 400 oil and gas executives showed up to learn about offshore wind business opportunities in which they could participate. Organizers of the show had expected 150.

Other industry events have reported similar increasing interest in the sector both from European firms that have been building offshore wind farms for over a decade in oceans of Germany, the U.K., and Denmark and from experienced oil and gas players in the U.S. looking to diversify.

There are five turbines in U.S. waters spinning and producing electricity at the Block Island Wind Farm (BIWF) off the coast of Rhode Island. The 30-MW BIWF developed, owned and operated by Deepwater Wind remains the one and only operating U.S. wind farm. But many more are in the works. 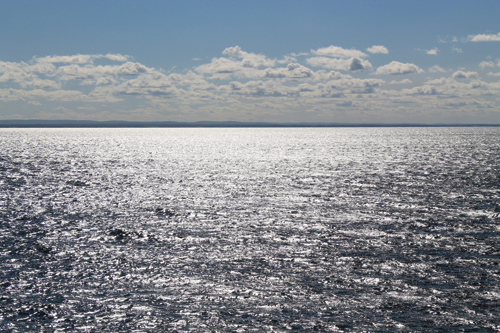 US Developer with Oil and Gas Expertise: Deepwater Wind

Deepwater Wind is the developer of BIWF and is fast at work on a number of other projects. The company, which has experienced oil and gas executives running at the C-level has two leases from the Bureau of Ocean Energy Management (BOEM) covering a total of just about 165,000 acres of ocean. It has three projects in development: the 90-MW South Fork Wind Farm off the coast of Long Island, New York, which is expected to begin construction in 2021; the Revolution Wind project off the coast of Massachusetts and Skipjack off the coast of Delaware.

South Fork wind farm has a PPA with the Long Island Power Authority to buy all the output of the wind farm. Generally, once a developer has a PPA in hand, financing follows. Banks need to see that the project has an offtaker before they can commit funding for energy projects.

Deepwater is currently seeking an offtaker for its Revolution Wind. The company has proposed pairing this wind farm with energy storage which would make it the first time that energy storage and offshore wind were paired in the U.S. Deepwater has a proposal before Connecticut to take 200 MW of offshore wind capacity, but the scope of the project is still unclear.

Without a committed offtaker yet, it is more difficult to be sure of the Revolution Wind construction date, however Deepwater has stated in press releases that “local construction” could start as early as 2020 and the project could be operational by 2023. Note that Deepwater is also proposing to assemble the wind turbine foundations in Massachusetts, which is why local construction could begin in as little as two years from now.

Deepwater is also working on a 120-MW, 15-turbine wind farm off the coast of Delaware called Skipjack. Jeff Grybowski is leading the company. 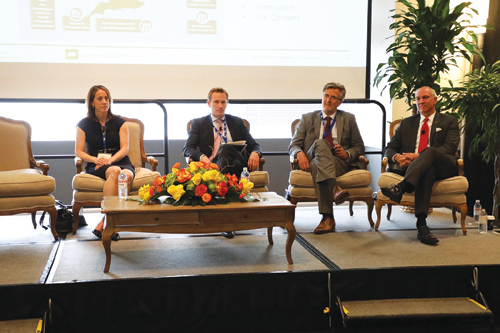 Ørsted also comes from the oil and gas industry. Formerly known as DONG Energy, which stands for Danish oil and natural gas, the company re-branded to Ørsted in 2017.

Bay State Wind is a partnership between Ørsted and Eversource, a New England utility that owns transmission. Like Deepwater, the two entities submitted a bid to Connecticut in response to its RFP for “Constitution Wind,” a 200-MW wind farm off that would be constructed off the coast of New London, CT if the proposal is accepted. 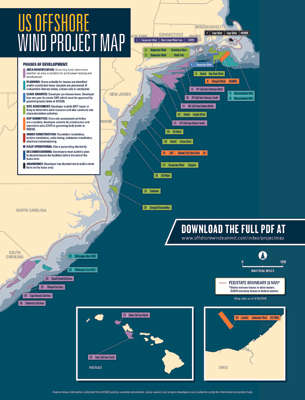 While Ørsted and Deepwater may be the largest developers currently working in the U.S., three other developers have the potential to win the race to have the second fully-operational wind farm in U.S. waters.

Fisherman’s Energy holds a lease with the state of New Jersey for a wind farm 2.8 miles off the coast of Atlantic City. In April, the developer announced that EDF RE will take over the 24-MW project, which is ready to begin construction. The project had stalled under New Jersey Governor Chris Christie but was revived when new Governor Phil Murphy took office this year. Chris Wissemann is the CEO of Fisherman’s and Doug Copeland is the Regional Project Development Manager for EDF. The companies say the project could begin construction later this year. 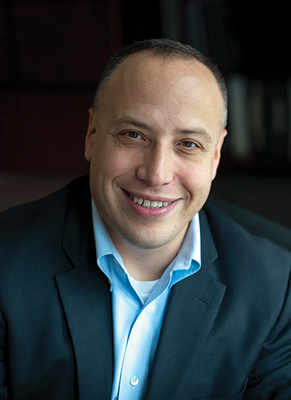 Vineyard Wind, based in New Bedford, Massachusetts, is 50% owned by Copenhagen Infrastructure Partners and 50% by Avangrid Renewables. The company is led by Lars Thaaning Pedersen, CEO and has submitted a Construction Operations Plan (COP) to the BOEM. Submitting your COP to BOEM is the final permitting step needed before construction begins although there are number of steps that BOEM takes before it is able to approve the COP; including first deeming it sufficient and complete and then conducting its own environmental and technical reviews of the plan. These activities can take up to a one year. 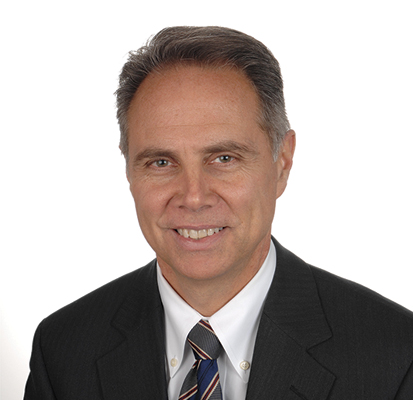 Vineyard Wind was selected as the winner of the Massachusetts RFP and the company will proceed with construction of the project once it secures a PPA.

Finally, what could be the first offshore wind farm in fresh water, Icebreaker Wind, is also nearing construction. Developed by Lake Erie Energy Development Co. (LEEDCo), which is headed up by Lorry Wagner, the 20.7-MW, 6-turbine project is in its final permitting stages with the state of Ohio.

Norwegian multinational oil and gas company, Equinor (formerly Statoil), has entered U.S. offshore wind industry. The company holds a 79,000-acre lease off the coast of New York for which it paid $42 million. In late 2017, Equinor announced that it is working on plans to build Empire Wind, which could have up to 1,000-MW (1 GW) of wind energy capacity. 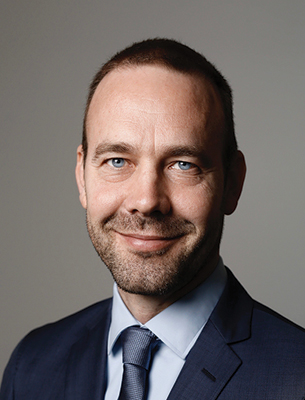 Maryland-based US Wind was founded in 2011 and is fully owned by Renexia S.p.A., an Italian renewable energy developer. The company is a subsidiary of Toto Holding Group which specializes in in large infrastructure construction projects, rail transportation and aviation.

US Wind is working on one very large project, the 750-MW Maryland project, which could install as many as 89 turbines. The company holds another lease further up the coast but has not announced any concrete development plans for it. Paul Rich is the Director of Project Development for US Wind.

Avangrid Renewables, the 50% owner of Vineyard Wind, mentioned above, is the sole owner of a project that could be built about 31 miles off the coast of North Carolina. The Kitty Hawk project could be up to 1,500 MW (1.5 GW) in capacity and use 100-150 turbines. David Rowland is the New Business Director for the company.

Finally, Virginia Electric and Power Company, (Dominion) a regulated public utility that serves Virginia and North Carolina, owns a lease to develop a wind farm off the coast of Virginia. No plans have been announced yet for that lease. 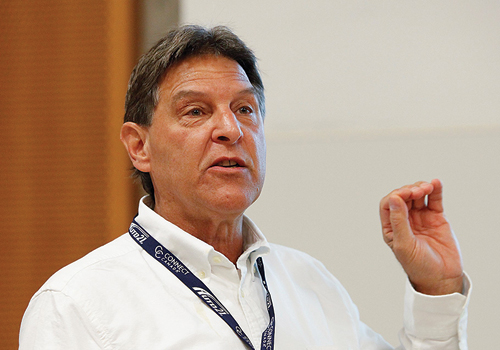 In the next few months, keep your eyes out for announcements about which companies were selected to fulfil the Connecticut RFP. In addition, stay tuned for an auction to take place for two wind energy areas available to lease off Massachusetts, which could see new entrants into the exciting U.S. offshore wind industry. And finally, if you think your company should be involved in offshore wind in the U.S., register for the 2nd Offshore Wind Executive Summit, set for September 24-25, in Houston, Texas. •