Total and partners Chevron and SNPC have committed to the complex Moho Nord development offshore Republic of Congo. 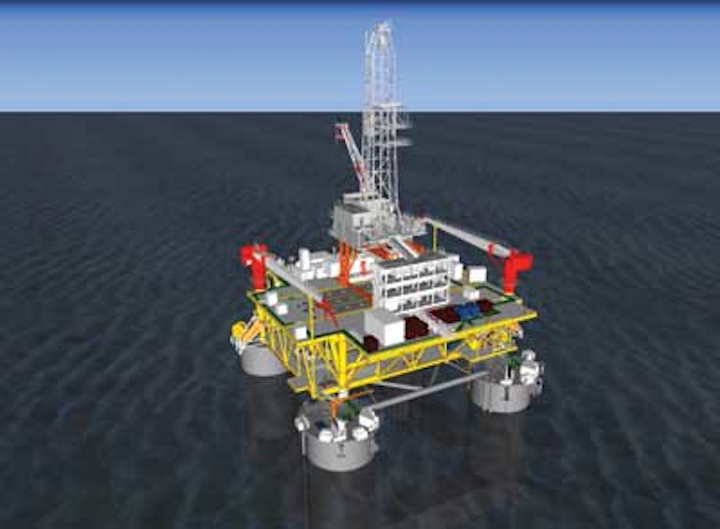 Total and partners Chevron and SNPC have committed to the complex Moho Nord development offshore Republic of Congo. The project is targeting oil and gas reservoirs at Miocene and Albian level in the north of the Moho-Bilondo permit.

At the same time, 11 new Miocene wells will be drilled in the permit's southern area as subsea tiebacks to the floating production unit (FPU)Alima, which has operated on the Moho-Bilondo field since start-up in 2008. This scheme, known as Moho-Bilondo Phase 1bis, and Moho Nord, will collectively extract an additional 485 MMboe of reserves at an estimated cost of $10 billion. First oil is scheduled for 2015, with output from the two new developments building to 140,000 boe/d in 2017.

Moho Nord will involve processing both light Albian and heavier Miocene crude on a second new FPU. Total has refined various solutions for dealing with mixed crude compositions on its multi-field deepwater projects in block 17 off Angola. One of these, the use of wash tanks to ease separation of incoming heavy oil, will be adapted for use on the new FPU. What is more novel on Moho Nord is the selection of an unmanned wellhead TLP designed for simultaneous tender-assist drilling of dry-tree wells and coiled tubing intervention, with the latter likely to be needed from the outset in the more problematic Albian reservoir.

Hyundai Heavy Engineering (HHI) is building both the TLP and the new FPU. Doris Engineering, which was involved in engineering for the first-phase Moho-Bilondo development in 2004-06 and the earlier Nkossa project in the same region, worked with HHI on detailed engineering for both new Moho Nord facilities. The 14,600-metric ton (16,093-ton) TLP will export production from 17 first-phase Albian wells to the new FPU. A further 11 Miocene wells will be drilled from four subsea manifolds as direct tiebacks to the FPU.

Total E&P Congo discovered the Moho-Bilondo field 80 km (50 mi) offshore in 1995, bringing it onstream in April 2005. This was Republic of Congo's first deepwater development, in water depths ranging from 540-730 m (1,771-2,395 ft), and involved drilling nine production wells and five water injectors in two subsea clusters on the Bilondo and Mobim reservoirs, both connected to theAlima. Oil is exported through a 16-in. pipeline to the Total-operated onshore terminal at Djéno, with associated gas piped to the Nkossa barge.

One year prior to start-up, the partners drilled the Moho Nord Marine 1 and 2 discovery wells, proving fresh reserves of Tertiary Miocene oil in the north of the permit. Two more successful wells followed in 2008-09, with Moho Nord Marine-4 encountering oil for the first time at Albian level, 4.4 km (2.7 mi) northwest of the Tertiary structure.

"The Albian section is very deep, at 3,400 m [11,155 ft] below the mudline," said Jérôme Iacovella, departmental head of naval architecture and marine operations at Doris Engineering. "This is much deeper than Moho-Bilondo and the reservoir will therefore be more difficult to produce, with 70˚ C [58˚ F] and 20 bar [290 psi] operating conditions. Due to the reservoir complexity, and the likely need for intervention from the outset, the partners decided that surface wellheads would be the best option for the Albian drilling campaign, with subsea wells on the Miocene part of the field. After evaluating potential concepts for the Albian wells, they went for a TLP.

"A spar platform was in contention, but the behavior of spars offshore West Africa is not so good because of the long-period swells, typically 15-22 seconds. In that range, the spar must be very, very deep. The swells also make installation of the spar difficult, because it has to be upended from a horizontal position. Also, the relative motions between the christmas trees and the spar are higher in these conditions than with a TLP. The TLP's tendon supports induce less motion, and the size of the platform is more compact, and therefore cheaper to build, and easier to operate for drilling with a tender-assist rig alongside."

Doris had performed numerous studies since the mid-1990s, first on TLPs and later a mini-TLP for tender-assist drilling off West Africa. Total also considered a tender-assist wellhead TLP for Moho-Bilondo during the conceptual phase.

At peak, Moho Nord's platform will produce 40,000 b/d of light oil from the Albian reservoir, which will head to the new FPU through conventional flexible transfer lines flowlines and risers suspended at a water depth of 200 m (656 ft). The TLP itself will be located in 780 m (2,559 ft) water depth, with the FPU moored in 800 m (2,624 ft) of water.

Moho-Nord's platform, to be built by Hyundai in Ulsan, South Korea under a $1.3-billion contract, will be 60 m (197 ft) wide, 56 m (184 ft) high at the upper deck, 119.5 m (392 ft) at the top of the drilling set, and with a displacement of 35,000 metric tons (38,581 tons). There will be no facilities onboard for processing aside from testing equipment, and no accommodation either, a first for a TLP anywhere, according to Iacovella, although personnel will come aboard from the FPU for drilling and coiled tubing operations. The facility will have 27 well slots. It should be delivered during the first half of 2015, with drilling scheduled to start in 3Q 2015. Twelve production wells and five water injector wells will be drilled, with seven more producers and three more water injectors to follow in a future phase.

The TLP's modular drilling package will be supported and controlled by a newbuild tender-assist semisubmersible rig, both to be supplied by Houston-based Bassdrill. The TLP's drill floor will be higher than normal, at 17.5 m (57 ft) above upper deck to accommodate the coiled tubing equipment housed below, which will be deployed via an overhead crane. Another innovation, designed to save space, is the location of the BOP within a cage between the TLP's upper and lower decks.

"Unocal was the first company to deploy a wellhead TLP with a BOP, on the Seno field offshore Indonesia," Iacovella said, "but this is the first instance of a TLP with both a BOP and coiled tubing. Both normally take up a lot of room. We performed tank tests to prove the stability of our concept, including vortex-induced vibration issues, at Marin in the Netherlands. Further tests will follow at Océanide in southern France on the impact on the TLP of a dry transportation."

As stated earlier, the facilities are designed to provide constant access to the wells for intervention, simultaneous with drilling operations. "The TLP will have an open wellbay with five center slots," said Iacovella. "This will allow the drilling riser to be skidded seamlessly from one slot to another to drill all the wells without having to be dismantled. That saves a lot of time for the drilling contractor, which is important because the duration of the drilling campaign will be longer than normal. Otherwise, the rest of the drill floor equipment is standard."

Operations on the TLP will be controlled from the new FPU via a flexible umbilical, again suspended in midwater. Aside from an onboard emergency generator, all the TLP's power will also be supplied from the FPU. "The idea is to save as much weight as possible," Iacovella explained.

"Otherwise," said des Déserts, "it will be fairly conventional, although it will include equipment for two types of separation, one for the fluids from the TLP, and one for production from the subsea wells. For crude stabilization Total plans to incorporate wash tanks, which it has deployed previously on the Pazflor FPSO offshore Angola and on Usan and Egina offshore Nigeria.

"The intermediate tank will serve as a very large separator. There is an issue of emulsion to deal with in the heavy Miocene oil arriving from the subsea wells. Washing out the continuous layer of water from the crude will ease separation."