Tullow Oil is one of the big players in the offshore West Africa oil and gas exploration and production venue. 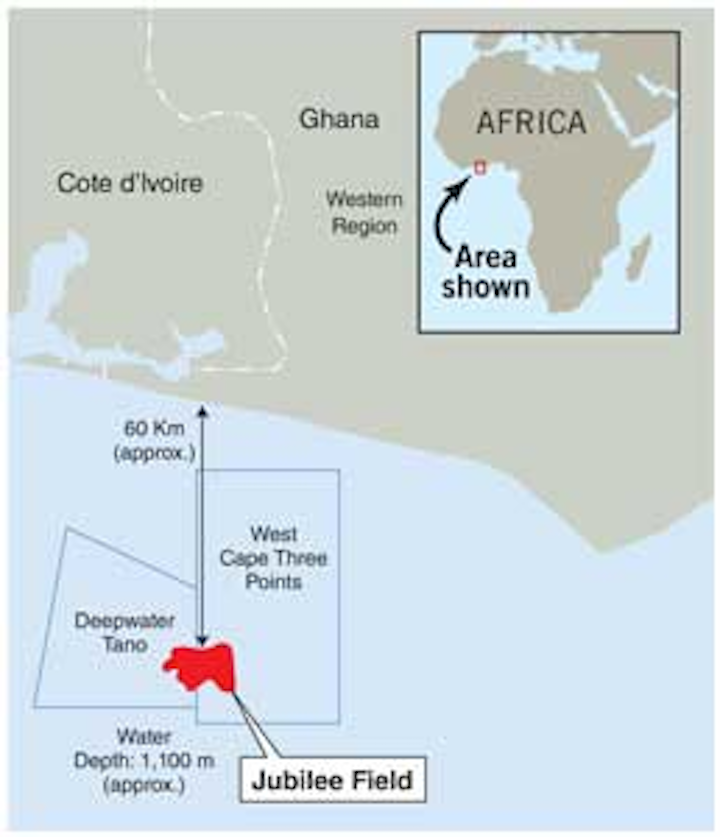 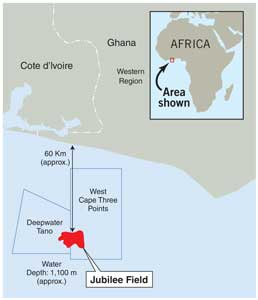 Tullow Oil is one of the big players in the offshore West Africa oil and gas exploration and production venue. It has operations off Gabon, Ghana, and Côte d'Ivoire, in particular, and holds interests in Congo (Brazzaville), Equatorial Guinea, Guinea, Liberia, Mauritania, Senegal, and Sierra Leone. Going further east, Tullow is involved in Uganda, Mozambique, Madagascar, Kenya, and Namibia. The following is a look at Tullow's West Africa operations.

Since the start of this year, Jubilee field production has increased toward the FPSO design capacity and is currently producing at a rate of around 110,000 b/d of oil. By the end of 3Q 2013, work on a gas handling constraint on the FPSO should be complete and Jubilee production is forecast to increase to more than 120,000 b/d. A gas injection well is also expected to be drilled and completed by 4Q 2013 for additional reservoir pressure support and gas disposal in advance of the start-up of the gas export facilities in 2014.

Over at TEN, Tullow and partners submitted a plan of development to the Minister of Energy late last year, and in 2Q 2013 the government approved the plan. Tullow and its partners plan to proceed with the development of these discoveries and to define the final schedule and capital program to deliver first oil in 2016 followed by ramp up to 80,000 b/d.

Development of TEN will include drilling and completing as many as 24 development wells, which will be connected through subsea infrastructure to an FPSO moored in approximately 1,500 m (4,920 ft) of water.

Tullow estimates the overall cost of the TEN development will reach $4.9 billion, excluding the FPSO lease. This is more than the original estimate partly because of an expansion of the scope to enhance recovery from Ntomme and facilitate gas export.

Additionally, a 3D seismic survey should be completed over the TEN and nearby Wawa fields by the end of 1Q 2014.

The Wawa discovery well showed good-quality oil, between 38º and 44ºAPI, and pressure data indicate the discovery, drilled by partner Anadarko, is separate from the adjacent TEN complex. The Wawa-1 exploration well is in 1,926 ft (587 m) of water.

Tullow Oil has found small quantities of gas/condensate with its latest exploratory well offshore Côte d'Ivoire. The semisubmersibleWest Leo drilled the Calao-1X well in the CI-103 license in 1,906 m (6,253 ft) of water, at a location northwest of the earlier Paon-IX oil discovery in the same concession. It encountered 5 m (16.4 ft) of thin condensate/gas bearing reservoirs in an Upper Cretaceous deepwater channel system.

A side track was then performed, targeting a better developed reservoir unit downdip, and this intersected good-quality water bearing sandstones. Pressure data suggest this zone may be in communication with the condensate found in Calao-1X.

Tullow has interests in 21 licenses in Gabon, including 14 producing fields and back-in rights to six more licenses. The company says these licenses are in areas of significant potential and give the group exposure to almost 40% of Gabon's licensed acreage.

Net oil production for Tullow in the first half of 2013 averaged 13,400 b/d, slightly lower than expected due to a short oil workers' strike in March and delays in the planned infill drilling programs at Tchatamba and Limande. The infill drilling is now scheduled for 4Q 2013.

Exploration drilling plans call for two operated exploration wells targeting the Perroquet and Crabe prospects due to spud in 3Q 2013 in the Kiarsseny block.

Acquisition of 2D seismic surveys in the Nziembou and DE7 blocks is complete and a nonoperated well is planned on the M'Oba prospect in block DE7.

Interpretation of data acquired from a 3D survey over the presalt Sputnik prospect in the Arouwe block is complete, with drilling scheduled for the first half of 2014.

Significant offshore and onshore drilling activity is expected to continue on all fields in 2013, with a program exceeding 60 infill wells across the Gabon portfolio.