When Shell sanctioned the Prelude floating liquefied natural gas (FLNG) project in 2011, the company emphasized that it intended to use the massive floater design as a template for a series of FLNG units. 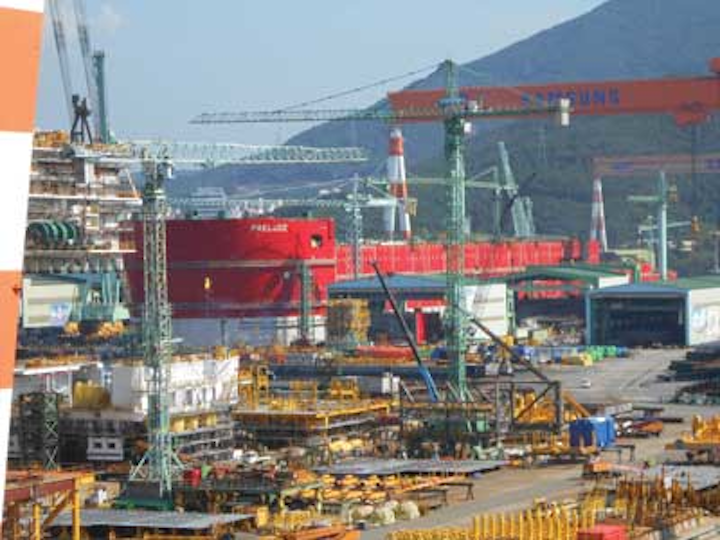 When Shell sanctioned the Prelude floating liquefied natural gas (FLNG) project in 2011, the company emphasized that it intended to use the massive floater design as a template for a series of FLNG units. That strategy appears to be playing out offshore Western Australia, where Shell, operator Woodside, and partners in the Browse LNG development are making plans for three FLNG units to serve the Brecknock, Calliance, and Torosa fields in water depths up to 750 m (2,460 ft). ExxonMobil recently submitted to Australian regulators a proposal for a 495-m (1,624-ft) long FLNG vessel to serve the Scarborough field, with an eye to first cargo around 2020. Prelude, the first FLNG project to reach sanction, is being assembled in South Korea by a consortium of Technip and Samsung Heavy Industries. During a recent Houston visit,Offshore spoke with Marjan van Loon, vice president LNG in the Projects and Technology division of Shell's Global Solutions Upstream group, about Prelude and the company's plans for FLNG in Australia.

Offshore: The Prelude floater is coming together in Samsung's Geoje shipyard. Will subsequent vessels be built there as well?

Van Loon: We are going to build many, and they will all be built there. As soon as you go with someone else, you lose a lot of the learning. I think that's been the success not only of Prelude but of all of the developments in our floating portfolio - that we had quite good certainty about the capability, about the costs, and about schedules. We've done a lot of work, so we can now keep repeating that same design. (Prelude) has a very large operating window, so it can fit on different fields.

At the moment, we are studying with Woodside for Browse. That's really based on Prelude and the Prelude design, and the reason that the venture partners have an appetite for it is because we could give them a lot of cost and schedule certainty, which de-risks the project. They know where it's going to be built, and what it's going to look like.

Offshore: Was Shell's involvement in Browse contingent on the FLNG option, or in Woodside's decision to abandon plans for an onshore liquefaction plant at James Price Point?

Van Loon: No, we believed in Browse and the development. It's a very attractive field. We were very seriously committed to the onshore option. At the same time, of course, we were maturing Prelude, so we got further and further insight on how the floater was looking. And I think only when Woodside realized that it would become difficult for Browse to get venture partner approvals, because economically it was a struggle, we looked at what FLNG could mean. It was good that we had a scheme, so we didn't have to start from scratch.

Offshore: Since Shell decided to go ahead with Prelude, it seems there has been a flurry of FLNG pre-front-end engineering and design (FEED) and pre-FEED announcements, as if a lot of companies were waiting for you to be the first to make that leap.

Van Loon: That's good to see. Floating LNG just makes sense for offshore fields where you don't have a monetization route for an onshore scheme, because it's just too complicated to complete, or too far to shore. And I think now we've learned, with Prelude and Browse, that it can be very competitive to onshore schemes.

Offshore: You mentioned that the Prelude design has a large operating window. What kind of customization does the design allow?

Van Loon: It was designed for Category 5 cyclone conditions at Prelude. It can easily accommodate conditions at Browse. We will need to adapt it for location-specific things, like mooring, but not a lot for gas. Browse is rich gas, like Prelude.

We have a bit of a plug-and-play strategy, where if you have far less CO2, then you could take out half of the CO2 absorption (system). We have two units, but you could have only one. We have kind of a modular approach, but the heart of the unit would stay the same. And there's a "lean" concept for lean gas, where you don't need the liquids processing capacity for LPG, and you have far less condensate, but also you're struggling to make it economical, because you don't have the income from liquids. So what we've done is to use Prelude as a basis, remove what we don't need, and use that space to increase the LNG capacity. We have floating LNG lean concepts for six million tons per annum and nine million tons per annum, compared to the Prelude design, which takes a little bit less than four million tpa of LNG, but then produces LPG and condensate. So we try to standardize as much as possible.

Offshore: One notable thing about FLNG is that it brings a lot of disparate groups - upstream, downstream, and marine - together on one unit.

Van Loon: And they need to work together seamlessly. Shell is a big company, and a lot of people are used to working in their own silos. So we really had to bring that together and shape that. That was very interesting, but I think people were very motivated.

That's where I think Shell is in a unique position, because we have strength in all of these areas. If you look at marine, and LNG shipping, we were quite strong. Upstream is more or less the heart of Shell. And in LNG, we have been a long-term player, and we have quite a long history.

Offshore: We've been talking about FLNG for decades. Why now?

Van Loon: I think it's a combination of things. We were quite serious about floating LNG in the past, but the stars hadn't quite lined up. When we were thinking about Prelude, I think what worked for us is that it was our field, 100% operated, so we didn't have to convince anyone else. So we could move ahead and make our own decisions, and only when we took FID later on, we diluted (equity). I think that was a successful concept for bringing it on market. And now, of course, it's economical because the LNG price is good.