After the Macondo incident in 2010 brought drilling in the deepwater Gulf of Mexico to a halt, some observers questioned whether the region could ever regain its position as one of the world's premier energy basins. 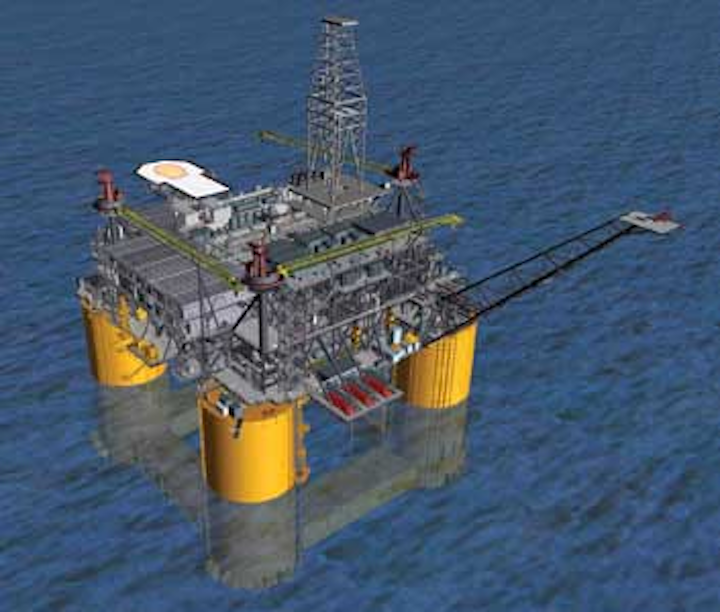 Olympus TLP will be the largest in the Gulf of Mexico

After the Macondo incident in 2010 brought drilling in the deepwater Gulf of Mexico to a halt, some observers questioned whether the region could ever regain its position as one of the world's premier energy basins. Yet only five months after the event, in the midst of the country's economic recession and lingering low oil prices, Shell Offshore Inc. made a courageous move. It became the first energy company post-Macondo to demonstrate its confidence in and commitment to this offshore arena by sanctioning a major deepwater project: a second tension leg platform (TLP) on the massive Mars field. The multi-billion-dollar initiative will extend the production life of the Mars field for decades to come and increase the oil and gas recovery from this strategic offshore asset. Shell owns 71.5% of Mars and serves as operator.

Mars B builds on a history of pacesetting projects that has made Shell the largest oil producer in the Gulf of Mexico. When Shell first encountered hydrocarbons in the Mars basin in 1989, it was one of the Gulf's largest discoveries to date, with reserves initially estimated at nearly 700 MMboe. Seven years later, a TLP installed on the field in 3,000 ft (914 m) of water set a depth record in the Gulf for a permanent drilling and production platform. The platform, with 24 well slots, was the first in this offshore arena to produce more than 100,000 boe/d. It was designed to handle about 220,000 b/d and 220 MMcf/d (6.2 MMcm/d) and to recover about 500 MMboe during its economic life.

Even as plans for this first TLP were being formulated, the project team recognized that Mars could be even larger than anticipated and envisioned that a second platform might be required for its full development. Although some uncertainties about the field's size remained, engineering work on a possible second TLP began. By the time discoveries were made on the adjacent West Boreas and South Deimos fields in 2009 and 2010, respectively, dramatically improving the project's economics, a tremendous amount of work already had been accomplished.

Then the Macondo incident occurred, resulting in a dramatically different regulatory environment for Gulf of Mexico deepwater operators. Although Shell has a track record of safe operations in the Gulf, lack of clarity around the new regulations and how to respond to them triggered conversations within the company about the fate of Mars B. The conclusion was clear: Deepwater development is an integral part of Shell's upstream strategy, and the Gulf of Mexico is a significant contributor to the company's deepwater portfolio and to the nation's energy security. The project would proceed as planned.

The hull of the Mars B TLP was fabricated in South Korea by Samsung Heavy Industries and left the shipyard in November 2012 for Corpus Christi, Texas, where it will be mated with the topsides that are being built by Kiewit Offshore Service.

The dimensions of the platform itself are as bold as the decision to go forward with this project. Labeled Olympus, it will have 24 well slots and a throughput capacity of 100,000 b/d and 100 MMcf/d (2.8 MMcm/d). It will be designed to operate for 50 years, the longest of any structure in the Gulf of Mexico. Olympus also will be the region's largest TLP; it will stand more than 400 ft (122 m) tall and weigh 119,000 tons, more than double the weight of the original Mars TLP and will be 20% heavier than the Gulf's largest TLP, which is located on Shell's Ursa field.

The platform's substantial size will support a direct vertical access drilling rig with a 2-million ton hook load, the biggest in the region and the biggest globally to sit permanently on a production platform. This will allow for development of deeper, higher-pressure reservoirs that are beyond the capability of the Mars A platform.

The platform will house 192 people, more than any other TLP in the Gulf, and its design has incorporated features that will minimize safety risks to those personnel. Placement of the pipe in the drill hole will be controlled remotely from the drilling cabin rather than being done manually. Equipment typically located inside the hull columns will be moved to the topsides, eliminating the need for people to enter confined spaces for maintenance and inspection, which will also increase efficiency because the machinery will be more accessible.

Olympus will be the first of Shell's Gulf of Mexico offshore facilities to be connected to shore via fiber-optic cables. In addition to enhancing safety by allowing for backup systems onshore and enabling tasks to be remotely controlled from One Shell Square in New Orleans, the cables can convey significantly more data than is currently possible, enhancing collaboration between offshore and onshore team members and putting onshore experts at the offshore supervisors' fingertips.

The beauty of the Mars B platform design, however, is not its cutting-edge technology but its replication of design elements, equipment, and practices Shell has developed, fine-tuned, and standardized in implementing five other TLP projects in the deepwater Gulf. Because of this experience, Shell has established a level of internal expertise in TLP design, engineering, construction, and commissioning that is unique in the industry. As a result, the Mars B project team has taken a more hands-on approach, developing a well-defined project scope with highly-detailed designs, and working directly with the fabricators to deliver these massive endeavors.

Shell site verification teams in the fabrication yards monitor construction and engage routinely with contractors at a senior level to identify trends, share learnings, and promote safety. Some of the site team members working on the topsides and hull have participated in Shell TLP projects dating back to Auger, the company's first TLP in the Gulf, which began production in 1994.

In a pilot program that represents an industry first, the project team introduced 4D plant design management software (PDMS) to the topsides construction project. This system links the commonly used 3D PDMS to construction activities, providing a color-coded visual representation that displays the progression of construction over time on an iPad and makes it easier for the site project team to monitor construction progress.

All of these elements contributed to the project's success in overcoming a series of natural disasters. First, an earthquake in Japan disrupted steel deliveries to fabrication yards. Then Hurricane Isaac hit the Gulf of Mexico, where drilling was under way, and a typhoon hit South Korea, where construction of the TLP's hull was taking place. The engineering maturity of the design and capabilities of key contractors enabled the team to reshape work plans, readily adapt to the challenges, and keep the project on track for target expected delivery.

In anticipation of the platform's installation, theNoble Bully I arrived on the Mars field from Singapore in 2011 to begin drilling the wells. It is the first activity for the state-of-the-art rig, the first of two Bully rigs jointly designed by Shell and Noble, which are equipped to drill in up to 10,000 ft (3,048 m) of water. The Bully rigs' design makes it well-suited for this type of work. For example, instead of a conventional derrick, it features a time-saving Huisman drilling tower, with strings of pipe pre-loaded into four carousels, allowing for wells to be drilled in a type of mass production process.

The Mars basin's geology poses potential drilling challenges. Small sand stringers with the potential for shallow-water flow lie about 3,000 to 4,000 ft (914 to 1,219 m) below the mudline, and absent proper well control, can flow back and impact the seafloor location of the Olympus TLP. To address this potential, the project team identified a location in the Mars basin where the possibility of shallow water flow is minimal and began batch-setting the wells. Because of the learning curve that has resulted from drilling the well in this fashion, the number of days required for each batch set has dropped from more than 25 to 11, which not only reduces costs, but means more wells will be available for production when the TLP comes onstream.

Mars will be developed as a single field, benefiting from the synergies generated by having two 24-slot platforms located about a mile apart. For example, when Olympus comes onstream, it will concentrate on deeper, higher-pressure reservoirs. The focus for Mars A will then shift to smaller reservoirs and water injection for waterflood projects to drive production to both platforms.

Mars B is one of the first Shell Gulf of Mexico deepwater projects to incorporate a significant social investment component in its budget, pledging $5 million to community projects ranging from support of an orphanage in Korea to coastal restoration projects in Texas and Louisiana. Shell is also looking to have a positive influence in areas where it will have future construction activities.

This second phase of the Mars field represents the first of a string of projects Shell plans to undertake in the deepwater Gulf of Mexico over the next four or five years. The company will continue to secure its leadership position in this prolific offshore basin as part of its quest to become the most innovative, competitive energy company on the planet.