DNV engineers have developed the X-Stream concept to improve the viability of gas transport pipelines in deep and ultra-deep water a long distance from shore. 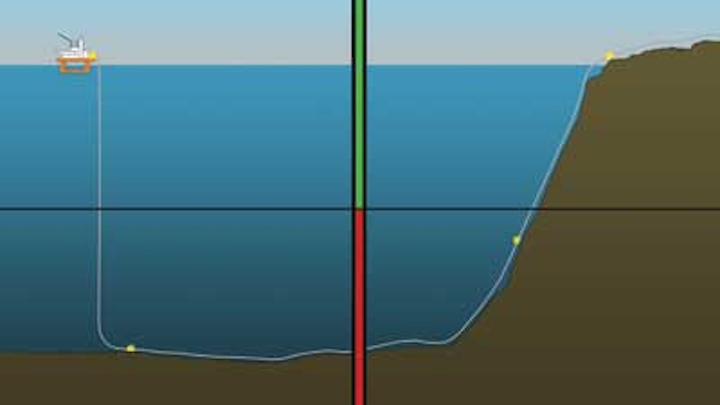 DNV engineers have developed the X-Stream concept to improve the viability of gas transport pipelines in deep and ultra-deep water a long distance from shore. Currently, the cost of pipes strong enough to withstand the pressure differential between internal gas pressure and external hydrostatic pressure in deepwater, and the logistics associated with their installation, can make such pipelines uneconomical. Using X-Stream to control internal pressure, thinner pipe can be used, alleviating these challenges without compromising safety or the integrity of the pipeline.

In 2009, Petrobras posed the question to Dr. Henrik O. Madsen, DNV's CEO: three hundred kilometers (186 mi) from shore, in water 3,000 m (9,842 ft) deep, how can associated gas be economically piped to shore so it can be sold rather than just re-injected? This was not just a theoretical question. A solution could enable commercialization of the gas associated with Brazil's presalt oil fields.

"The challenge is to avoid pipeline collapse over hundreds or even thousands of kilometers as a result of loss of internal pressure through a leak or rupture of the pipe during operation," said DNV Project Manager Flavio Diniz.

Madsen was enthusiastic about the challenge. "As the deepwater gas transportation market will experience massive investments and considerable growth in the years to come, new safe and cost efficient solutions are needed," he said.

DNV has a history of involvement in deepwater projects, including the proposed Oman-to-India pipeline; as well as Bluestream, Perdido, and Ormen Lange.

In Rio de Janeiro, DNV has a strong technical team that focuses on riser/pipe engineering and risk management. So, Madsen established a team of mostly young engineers, backed by the global expertise of DNV, and set them to work on the question. The solution was to only involve proven technology. Petrobras engineers were enthusiastic partners throughout the project.

The breakthrough came with the realization that the concept behind existing high integrity pressure protection systems (HIPPS) could be used to protect against not just high pressures but low pressures as well. HIPPS is a type of safety instrumented system (SIS) designed to prevent over-pressurization of a plant, such as a chemical plant, oil refinery, or pipelines. It will shut off the source of the high pressure before the design pressure of the system is exceeded, thus preventing loss of containment through rupture (explosion) of a line or vessel. Therefore, a HIPPS is considered as a barrier between a high-pressure and a low-pressure section of an installation.

Currently there are about 20 subsea HIPPS around the world. They are used when the flowlines are designed with a lower pressure than the full well shut-in pressure, to avoid overpressure of the flowline. The idea is that if it is acceptable to use a HIPPS to avoid overpressure of a pipeline, it should be equally safe and acceptable to use a HIPPS system to avoid a low-pressure scenario. The inversion of this technology laid the foundation for DNV's X-Stream deepwater piping solution.

It is the need to prevent the pipe from imploding that currently dictates pipe wall thickness. In ultra-deepwater, the wall pipe needs to be extremely thick, and thus can only be manufactured by a limited number of pipe mills. The thick pipes are also heavy to transport and handle; slow to weld and difficult to install; and require extremely thick and costly buckle arrestors. Currently, the number of suitable installation vessels is also limited.

X-Stream introduces a new method to deal with the high external hydrostatic pressures of deepwater without relying purely on material thickness to ensure the integrity of the pipeline.

"Fundamental to the solution is the need to protect thinner pipe from collapse during installation, in case of accidental damage and in emergency shutdown scenarios," explained Asle Venås, DNV Pipeline Segment Director. "The idea of an inverted HIPPS system, i-HIPPS, which isolates the deepwater section of a pipeline when internal pressure drops to a critical level, will fulfil this role, enabling pipe walls to be significantly reduced compared with traditional pipelines."

However, risk analysis showed one unlikely but potentially serious danger remaining – that of an internal leak in the i-HIPPS system itself. If this happened, it would mean the pressure drop could not be arrested.

To cover the situation of an i-HIPPS leak, another inversion of existing technology was brought to the system. This time, rather than double block and bleed (DBB) valves being used to relieve high pressure situations, they would be used to prevent pressures dropping to critical levels. An i-DBB provides backup for the containment of the pressure drop by introducing a gel into the enclosure between the i-HIPPS valves in shallow waters. X-Stream, then, consists of a series of automated valves, pressure transducers and autonomous logic controllers to provide an integrated pressure control system for the lifetime of the pipeline.

In a pipeline running to shore from deepwater, the main i-HIPPS system would be located above the water line to ensure easy access for maintenance, inspection, and testing. The collapse critical point for a pipeline is the depth at which the external pressure can compromise the whole pipeline. Below this point, the impact of a pipeline rupture is limited by the ingress of water which holds back the gas in the pipeline. This situation is the same for traditional pipelines.

If, however, leakage or rupture of the pipeline occurs above the collapse critical point, at the rig or near the shore, major damage can result since the water pressure is insufficient to contain the gas and therefore the pressure loss. In this case, a secondary set of i-HIPPS valves would close on a pre-determined low pressure signal to isolate the deepwater pipe and ensure that pressure is maintained. Should the i-HIPPS system leak and pressure continue to fall, the i-DBB system would be activated. Further pressure drop would then be prevented by the gel release.

The secondary i-HIPPS system located below the collapse critical point would be activated to contain the de-pressurization. Should this secondary system develop an internal leak and the internal pressure reach a critically low level, a small bleed valve in the i-DBB system would open to the surrounding water so seawater could flood the void between the i-DBB valves and halt pressure loss.

"With i-HIPPS and i-DBB combined, the system immediately and effectively isolates the deepwater pipe if the pressure starts to fall. In this way, the internal pipeline pressure is maintained above a critical, pre-determined level for any length of time," said Diniz.

DNV's innovation, therefore, centers on inverting the well-established HIPPS and DBB systems to prevent too large a pressure differential in the pipeline, and X-Stream meets the strict requirements set for the safety and integrity of existing subsea piping including ISO and DNV-OS-F101. It becomes cost attractive when more than a kilometer of ultra-deepwater pipeline is required. This is because even small reductions in wall thickness make a huge difference in terms of steel volume, welding effort, and installation costs. The exact reduction in wall thickness depends on the water depth, pipe diameter, and actual pipeline profile. Typically for gas pipeline in water depths of 2,500 m (8,202 ft), the wall thickness reduction can be around 25 to 30% compared to traditional designs.

The result is a system that would be significantly cheaper than current pipeline technology. The production costs decrease as less steel is required in the construction of the pipe. The reduced wall thickness also means that manufacture using higher grade steel is possible. Installation costs are slashed by the reduced welding times, and the new system also results in increased lay rates without the need for buckle arrestors in some cases. Alternatively, the system could mean a larger diameter pipe can be achieved for the same wall thickness.

In either case, X-Stream reduces the consequences of accidents during installation. The pipe is installed fully or partially flooded with water to prevent collapse. Cleaning and gauging of the pipeline is performed and then it is dewatered and dried for operation. A minimum pressure is maintained in the pipeline during pre-commissioning using produced gas, separated from the water in the pipe by a set of separation pigs and gel. This technology is not new and is already standard practice for several oil companies, but X-Stream provides an additional safety mechanism during deepwater installation operations.

To date, the X-Stream innovation project has been limited to a concept study, and more detailed design will need to be carried out before it is realized on an actual project. DNV is not patenting the concept but intends to work with industry partners to refine the concept, and then act as certification body to approve the detailed design.

"At DNV, we feel confident that huge financial savings can be made for long-distance deepwater gas pipelines without compromising pipeline safety and integrity," explained Madsen.

X-Stream is not a one-off concept limited to Brazil's presalt fields. It is timely to take it to the next stage of development now, he says. New offshore oil and gas fields are being developed in deeper and deeper waters, and export solutions for the gas are critical.

"The technology could be taken around the world," said Madsen. "For instance, it is just as relevant to the pipeline planned between Algeria and Italy for the GALSI project; the South Stream project in the Black Sea; and the SAGE project linking India and the Middle East."

Madsen introduced the X-Stream concept in London this past January, and it has been positively received by offshore companies such as Petrobras, British Gas, Odebrecht Oil and Gas, Saipem, Technip, Subsea 7, and Heerema, among others. For Celso Raposo, Steering Committee Member of the project and head of pipeline services for DNV in South America, the project, coming at a time when Brazil is investing $1 billion/yr in research and development, is an example of the country's growing capacity for successful industry partnerships and technical innovation. He says: "DNV has been a pioneer in pipeline technology and we already work closely with Petrobras providing certification and verification services. The success of this project demonstrates DNV's ability for lateral thinking when it comes to solving practical, real-life problems for the industry."