This month, Infield Systems looks at the deepwater market by highlighting the growth in deep and ultra-deepwater reserves outside the traditional areas of North America (Gulf of Mexico), West Africa, and Latin America. 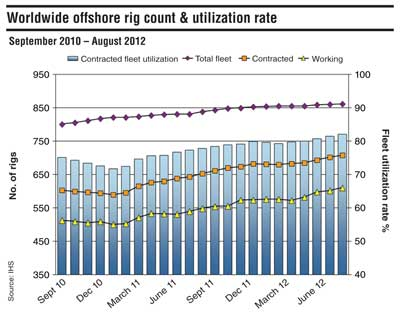 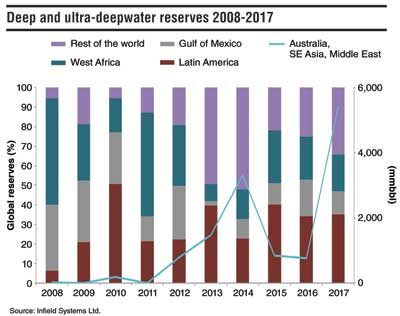 This month, Infield Systems looks at the deepwater market by highlighting the growth in deep and ultra-deepwater reserves outside the traditional areas of North America (Gulf of Mexico), West Africa, and Latin America.

Australasia, Southeast Asia, and the Middle East are expected to have the greatest proportionate increases in deep and ultra-deepwater reserves coming onstream from 2013-2017. More than 90% of global deepwater reserves coming onstream in 2008 were located offshore West Africa, North America, and Latin America. Over the previous five years (2008-2012), the percentage share of these traditional areas of deepwater production accounted for 87% of the total market. However, going forward to 2017 the market share of these regions is expected to decrease to 66%, as a result of substantial deepwater growth across several other regions.

The global share of Latin America's deepwater reserves has increased significantly since 2008, driven by Petrobras' activity offshore Brazil, and is expected to increase from 23% over the 2008-2012 period to 35% over the 2012-2017 timeframe. This increase is in contrast, however, with the declining reserve shares offshore North America and West Africa, which are expected to see a decline of 17% and 16% respectively.

Going forward, one of the leading areas of growth is expected to be the Middle East, with key deepwater fields located offshore Israel, including Noble Energy's Leviathan and Tamar gas developments. Australasia, with the high profile Jansz and Jansz SE fields expected to commence production in 2014, is also expected to be a key region for deepwater growth. Finally, offshore Southeast Asia, Infield Systems expects several large-scale deepwater developments to take place over the next five years, including the Shell-operated Gumusut-Kakap development offshore Malaysia, and the Chevron-operated Gendalo and Gehem gas developments offshore Indonesia.
– Catarina Podevyn, Analyst, Infield Systems Ltd.