The engineering and installation practices of conductors play a crucial role in a well's integrity. 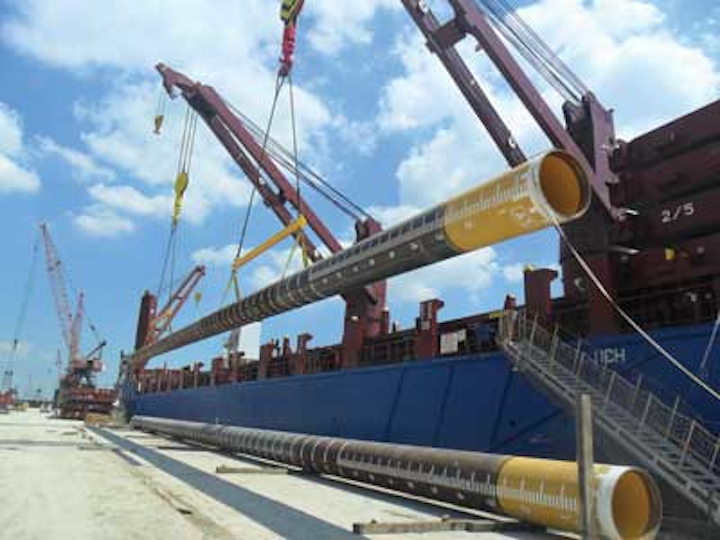 The engineering and installation practices of conductors play a crucial role in a well's integrity. This is especially true when load contributors such as drilling risers, casing strings, operational equipment, subsea trees, production risers and more are factored into the equation. Historically, with the advantage of being faster than drilling and cementing, jetting proved to be the industry standard of installing conductors into the seabed.

Driving of conductors gradually took over as the best-practice method in shallow-water locations. However, in recent years driving proved to be an option for deepwater sites. In an effort to uncover the reasons for this trend, InterMoor, an Acteon company, has drawn on its experience from the past five years of successfully completing deepwater conductor driving projects offshore Brazil. A deepwater hammer spread provided by sister company MENCK enabled driving in depths up to 6,300 ft (1,920 m) during these campaigns and provided an abundance of field data on the driving process, proving its safety and effectiveness.

Exploring new options for driven conductor projects remains a constant topic of discussion in the industry. In order to address this matter, a range of pertinent data has been collected from a variety of customers based on their jetting experience. This data includes information on problems encountered and the specific requirements on how to address these obstacles. Proven conductor driving methods were found to serve as an effective solution to some of these conductor jetting issues.

The method of conductor jetting became popular in the 1960s and is still widely used in deepwater today. Throughout this time there has been an outlying concern tied to the actual holding capacity of jetted conductors. Following theDeepwater Horizon oil spill, the failure to reliably predict conductors' holding capacity became a much larger issue. The unknowns stem from the very nature of jetting. Conductor capacity is provided by the friction between the outside of the conductor and the soil, and said soil is disturbed by the jetting process.

While it is relatively straightforward to determine the shear strength of the undisturbed soil from soil borings, it is difficult to calculate both the shear strength of the soil following jetting operations and the change in the soil's strength as it consolidates over time. Final holding capacity after jetting can be empirically estimated at best, and in many cases, considering the criticality of the conductor's role in the well, this does not suffice.

More importantly, industry geotechnical experts have differing opinions about the optimal method for estimating post-jetting holding capacity. On the other hand, there is a well-accepted industry standard for determining the holding capacity of a driven conductor. A hammer's driving energy and the number of hammer blows required provide sufficient information for straightforward evaluation of conductor strength.

Moreover, driving does not require a consolidation period for the soil to settle and strengthen. As soon as the hammer strikes its last blow, the structure is available for surface casing installation or any other succeeding operation; which in turn can provide cost savings. Contrary to this, upon reaching final depth, drillers occasionally have to hold the jetted conductor in place for an additional 36 to 48 hrs due to lack of support for the conductor's weight. In turn, this affects the job's bottom line and projected end date.

Additionally, drilling teams are reporting reduced visibility around the conductor during and shortly after jetting as another obstacle. As the pumped jetting fluid finds a path of least resistance outside the casing, a cloudy mixture of fluid and sediment is formed around the conductor. This reduces visibility and prevents ROV cameras from obtaining a clear view of the site. Soil disturbance is minimal in the case of conductor driving and is not known to cause visibility issues.

Driving methodology excels in accurate lateral and vertical placement of conductors. The soil is not liquefied as a result of the jetting process, and therefore provides reliable resistance as the conductor penetrates the seabed. To prevent the wear of wellhead and blowout preventer parts in the case of well conductors or to ensure proper installation of manifolds atop foundation conductors, the verticality requirement is generally 1°.

Three successful conductor installation projects performed offshore Brazil demonstrate the advantages of the driving technique. Thirty-seven conductors for wells and artificial lift manifolds (ALMs) with diameters of 36 in. (0.91 m) and 48 in. (1.22 m) were installed in water depths ranging from 3,880 ft to 6,300 ft (1,200 m to 1,920 m). The conductors were launched from a barge with a proprietary shuttle system, hung off under an anchor handling vessel (AHV) equipped with an A-frame or a crane, lowered to seabed, self-penetrated by their own weight through slots in previously installed spacer templates and, lastly, driven in by a MENCK 270T hydraulic hammer.

The use of a cheaper offshore spread that included an AHV, barge, and hydraulic hammer – in comparison to the use of a drilling rig – in conjunction with the installation's execution off of the rig's critical path added value to the job. As self-penetration was sufficient to secure stability until driving, savings were further increased by batch-setting conductors. Positioning tolerances were very tight for all three projects. The well conductors had to be installed within a 1 ft (0.3 m) radius, with vertical inclination of less than 1°, while the elevation of ALM conductors had to be within 6 in. (150 mm).

All 37 conductors were installed within tolerance. On average, it took approximately seven hours per conductor for launching and self-penetration, and approximately two hours for driving, which proved efficient. Verticality was within 1° for all conductors, with most actually measuring within only 0.5°. The achieved self-penetration depth and the actual hammer blow count were fed back to the client. This data provided the input for the post-driving conductor holding capacity, as well as for the verification of field soil data.

Deepwater driving of conductors has proven to be a safe and efficient method for conductor installation that also provides precise holding capacity. Great accuracy in conductor horizontal placement, verticality and elevation, coupled with savings from shortened schedules and reduced quantities of piping materials, provides the industry with a desirable option for various offshore regions and geotechnical conditions.