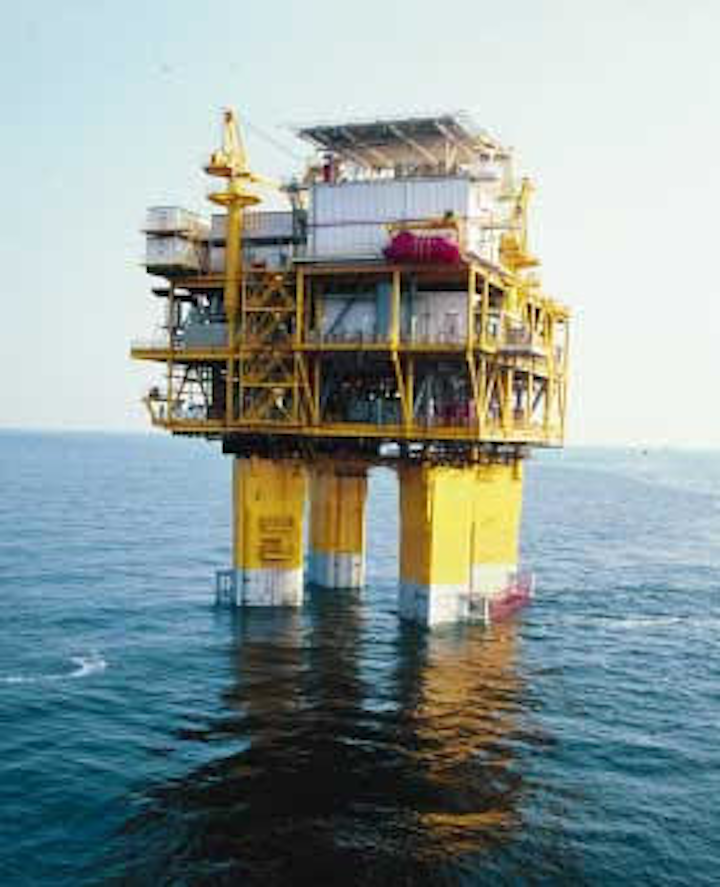 One of the most difficult steps in introducing a new floating production vessel design is convincing an oil and gas producer to be the first to deploy it. But with deepwater development costs at optimal levels, designers are having some success with production systems that can demonstrate cost savings over conventional systems.

Apparently, such is the acceptance for Moses tension leg platform (TLP) design, which was invented and developed by Pieter Wybro, TLP Marine Engineering Manager for MODEC. The MOSES TLP design was conceived as a minimal structure, but was found to be scalable enough to service a wide range of water depth and large payloads.

The hull is composed of four columns similar to a conventional TLP, but the columns are smaller and narrower than the squat profile of most TLPs. Wybro said the smaller columns cut down on the force imposed on the hull by the environment. The columns are mounted on an octagonal base with tendon supports extending out from four sides.

Wybro said, in addition to placing the buoyancy lower in the structure, this deeply submerged base combined with the tendon support system, lowers the center of gravity on the structure. This gives the hull better motion characteristics. Better motion translates into lower tendon forces and provides for more riser options.

Because of the reduced heave on the platform, the risers have a shorter stroke. In the case of Prince, Wybro said, this reduced stroke allowed MODEC to use the first application ever of a passive tensioning system for the four production risers. Conventional TLPs use hydro-pneumatic tensionors that are more costly and have higher maintenance requirements.

The TLP is anchored by four pairs of tendons, two on each of the four Tendon Support Structures, to ensure a robust and reliable design. On some smaller TLPs, three sets are used. Wybro said it is no more difficult to lock off four sets of tendons than three, and there is less stress on each tendon in this design, with greater redundancy in case a tendon were to fail. In this design, there would be seven tendons supporting the load held by eight if one failed. With three legs, there would be only five supporting the load that initially was distributed over six.

In addition to its unusual profile, the TLP design is flat sided. Typical TLP designs use tubular columns. Willie Rawles, Hull Fabrication Superintendent for MODEC, said the flat plate concept of this design grew out of discussions between engineers and shipbuilders, followed by further discussions with AMFELS shipyard where it was fabricated. Rawles said the yard was eager to use its new panel line fabrication facility on the project.

It was estimated that a TLP that made use of panel line fabrication could cut as much as 50% off of portions of its steel fabrication labor costs. These flat panels were much easier to work with, and the assembly of these panels into modules and other parts of the hull had fewer fit-up problems. The fabrication process was less labor intensive. It was also possible to perform more of the welding and construction in the easier 'down hand' position. "It was actually an easier design to work with. The connection details were simpler," Rawles said.

While the panels are easier to fabricate, the rectangular shape of the columns does have a greater drag coefficient than the circular columns. Ray Koon, Vice President for Projects and Engineering at MODEC, said the use of smaller columns compensates for this. Also, the columns are not completely squared off, as the column corners have rounded edges that help offset some of the drag. Koon pointed out that TLPs with large diameter columns will be penalized in performance with flat sides, but for smaller columns on the MODEC design, this offers operators a substantial savings.

El Paso Energy's Prince project in Ewing Bank Block 1003 began life as the Sunday Silence prospect, owned by Leviathan Gas Pipeline Partners, which was acquired by El Paso Energy Corporation in August of 1998. This discovery, in about 1,500 ft water depth, gained some notoriety for being the first Gulf of Mexico project to be granted royalty relief from the US Minerals Management Service. Part of the agreement was that the project would be developed in a timely fashion.

MODEC bid on Sunday Silence and conducted most of the testing, design, and engineering ahead of award using its own money in order to be able to meet the requirements of the fast-track schedule. Leviathan awarded MODEC the contract in mid-1999, and work began.

Steel was ordered, and fabrication commenced at AMFELS in mid-September as scheduled. During this time period El Paso and Sonat Inc. completed their $6 billion merger. With this merger, a decision was made to halt work on the TLP concept and consider a subsea tieback option instead. Work was stopped on Sept. 17, 1999, as the contract was put on "temporary suspension" while the engineering for the subsea tieback option was completed.

In late March of 2000, the decision was made by El Paso to continue work on the TLP. The caveat was that, despite the six-month suspension, the project would still need to meet its original installation window. Koon said there was a series of serious discussions with El Paso and the subcontractors before MODEC could agree to undertake this effort.

In effect, the first TLP of this design would now have to be built in 60% of the original schedule. Koon said a lot of credit for this success goes to subcontractors who shared MODEC's desire to see this project completed. Oil States Industries expedited the supply of tendon components, Gulf Marine Fabricators fabricated the tendon segments and piling, Amclyde built the innovative tendon support buoys, and the installation was subcontracted to Heerema. "Everybody worked to get the first one in the water," he said.

Air freighting materials and equipment, and working double shifts allowed AMFELS to have the hull ready for installation in May of 2001. Koon said the fact that MODEC had done a considerable amount of the design work and much of the model testing ahead of time contributed to this success by greatly reducing the number of design changes normally encountered on new innovative designs. The simplified construction of the TLP hull also contributed to the schedule recovery.

Four risers and dry trees make up the initial production design. There are flowline riser porches on the hull for six additional wells to tie in. Koon said these might handle additional production from Prince or a tie-in from another field. He also said there is a possibility that El Paso would relocate the TLP after Prince is depleted and that this required MODEC to design and model test the hull for 6,000 ft water depth applications. The results of these tests indicate that the MODEC TLP has extended the water depth rang typically attributed to more conventional TLPs.

With first oil scheduled for September 25, 2001, MODEC is looking for its next TLP project. Koon said for a design that was conceived as a mini-TLP, the MODEC TLP had been found to be easily scalable to these larger-size hulls without loss of efficiency. The point is that at these depths and larger payloads, the MODEC TLP design has been shown to compete with Spar designs.