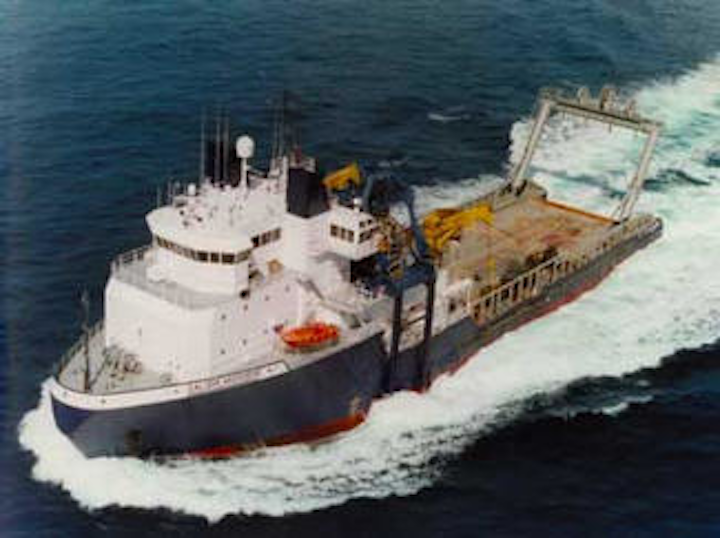 A method of mooring mobile drilling units and permanent production vessels with-out the aid of conventional winches and fairleads has been developed by CSO Aker Marine Contractors (Houston) in conjunction with BP. The method is being applied now as a backup system to a dynamically positioned (DP) drilling unit in the Gulf of Mexico, which is operating in relatively shallow water. However, the system has wider applic-ations. For example, it will allow:

The backup application, which was the first use of the 'winchless' mooring system, became available when a new generation DP rig, in this case Transocean Sedco Forex's Deepwater Horizon, became available to BP to drill a well in 2,400 ft water depth. This water depth is shallower than the normal design depth for DP rigs, and the Deepwater Horizon was not equipped with mooring winches. The rig is working in Mississippi Canyon Block 587 (Blues Image prospect).

The problem for the DP unit in this case is that in the event the riser needed to be disconnected from the guidebase, there might not be sufficient time to do so. Severe storms, drive-offs, and drift-offs are all conditions that require a fairly rapid disconnection. The limiting excursion for the rig for such events in this water depth is about 240 ft.

This first application of the technology involved a four-line semi-taut mooring system, using about 8,000 ft of 3.5-in. diameter wire for each line, and about 750-850 ft of 3.25-in. K4 ground chain on each end of the wire, connecting the drilling unit and the anchor. Peter Dove, Sr. Vice President of CSO Aker Marine Contractors, said the system is designed to keep the rig in a watch circle of less than 6% of water depth in a 10-year winter storm. Since the rig is being moored in 2,400 ft water depth, this would mean a maximum excursion of 144 ft.

Other devices, some created especially for this project in a short period of time, were employed on the Deepwater Horizon mooring system:

The fairlead foundation on the Deepwater Horizon are cantilevered outboard of the columns a distance of 20 ft and are positioned just above the water line, about 80 ft below the deck level. The PHAs, release mechanisms, and other rig-associated devices were installed by CSO Aker Marine Contractors on the drilling unit during commissioning of the rig in the Gulf of Mexico in late August.

To enable the PHA installation, platforms were installed at the top of each column. Dove said that spider baskets lowered from the platform allowed welding of the PHAs to the lower columns.

The four mooring lines and SEPLA anchors were installed by the anchor handling units (AHVs) Edison Chouest and Seacor Vanguard. The M/V Dove was used to attach the four mooring lines to the rig and tension each of the lines. The latter involved picking up the PHA pendant and mooring chain from the drilling unit, and pulling in the anchor wire from the opposite direction. The process of tensioning with two such lines is known as cross-tensioning.