In the high-stakes deepwater market, innovations that allow operators to move beyond conventional completion systems to deliver wells economically and reliably with long-term performance are essential. Increasingly, open-hole completions, rather than cased-hole designs that require the reservoir to be produced through perforations, are the preferred method in this expensive and risky arena. Open-hole completions enable greater reservoir contact, more production at a lower drawdown and ultimately, increased hydrocarbon recovery. 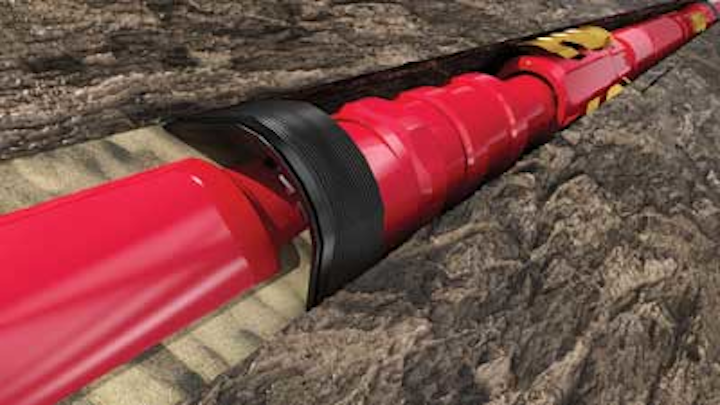 In the high-stakes deepwater market, innovations that allow operators to move beyond conventional completion systems to deliver wells economically and reliably with long-term performance are essential. Increasingly, open-hole completions, rather than cased-hole designs that require the reservoir to be produced through perforations, are the preferred method in this expensive and risky arena. Open-hole completions enable greater reservoir contact, more production at a lower drawdown and, ultimately, increased hydrocarbon recovery.

Operators are relying more on swell packers, which can conform to the rough, irregular shaped borehole, for open-hole completions. The packers, which swell when exposed to water or hydrocarbons, provide reliable sealing in the open-hole environment. This allows producers to compartmentalize sections with difficult geological characteristics, such as shale, which place additional loads on the completion.

Compartmentalization also enhances the function of inflow control devices and other tools, and creates a barrier in the open-hole annulus to force the fluid inside the screen for production. Without that barrier, most of the fluid travels up the screen/borehole annulus and flows into the screen at the up-hole end of the completion at a high velocity. This can cause the screen to erode and lead to a sand control failure that jeopardizes the integrity of the completion.

Long considered a reliable oilfield technology with a proven track record, swell packers present limitations in the deepwater sector. They take a significant amount of time to swell, sometimes as long as 12 to 14 days. With day rates as high as $1 million or more, the process can add time and cost. Additionally, because of the nature of swell packers, if they swell too much, they can weaken and hold less pressure.

As production companies venture into deeper water fields, they are looking for packer designs that deliver cased-hole functionality in an open-hole environment, ensuring the well flows properly for 20 or more years. That translates to immediate results that also are cost-effective and reliable. A new line of open-hole mechanical packers allows producers to complete wells differently by creating an immediate seal or compartment that provides life-of-well zonal isolation and protects the formation in irregular-shaped wellbores.

The Weatherford TerraForm Packer System uses self-energizing cup-seal isolation (CSI) technology to provide a robust seal that quickly and effectively molds to the changing and irregular geometry of the borehole. It is especially suited to horizontal, open-hole wells where discrete intervals exist and need to be isolated. The cup can expand at different diameters and provides a fixed, limited amount of force into the formation. This eliminates the possibility of putting too much pressure into the rock and damaging the reservoir or creating micro-fractures, which result in a loss of the pressure seal.

With independent setting mechanisms around the circumference of the elastomer seal, the CSI system provides a much broader range of expansion capabilities than conventional cup or mechanical packer technology that offers only a fixed diameter to create a seal, and is not suited for long-term use in open holes. The packer can be set without intervention or hydraulically in a variety of environments, achieving up to 1.2 ovality. In addition to zonal isolation, the portfolio includes several variations for use with alternative path, or shunt tube, technology for multiple applications, such as multi-zone gravel packs and frac packs that can be run in a single trip.

The tool includes two opposing, or outward-facing, cup-seal assemblies to provide bi-directional pressure integrity. An automatic centralizer raises the unit so the cup has more freedom to deploy. A rock anchor, or slip, is deployed between the cup-seal units to hold the packer in place by anchoring it into the rock, if desired. These units can be supplied in a modular configuration to provide a greater range of functionality and design flexibility.

Underneath the cup, a series of levers function similarly to the ribs of an umbrella. When activated, the device releases a mechanical lock, allowing the levers to engage. The levers are independent of one another, and can therefore expand and create the seal at different diameters in the irregular open hole. For example, if the hole is seven inches from top to bottom, but only six inches left to right, the levers deploy radially to expand the cup to seal each diameter.

When the cup comes in contact with the wellbore, a clutch mechanism slips to hold the cup in place while limiting the stress placed on the formation. The setting is complete when the levers have fully expanded and the packer is uniformly set across the circumference of the wellbore. The cup seals are tension-set, allowing them to maintain form as the steel components expand or contract due to thermal fluctuations, resulting in axial loading, when the completion is installed. The rock anchor, if needed, absorbs the load so the packer does not move and the rubber is not destroyed by scraping back and forth on the rock.