Falling oil prices - how will they impact the deepwater market?

In recent months, oil prices have fallen dramatically, resulting in concerns over the viability of some large and ultra-deepwater projects. 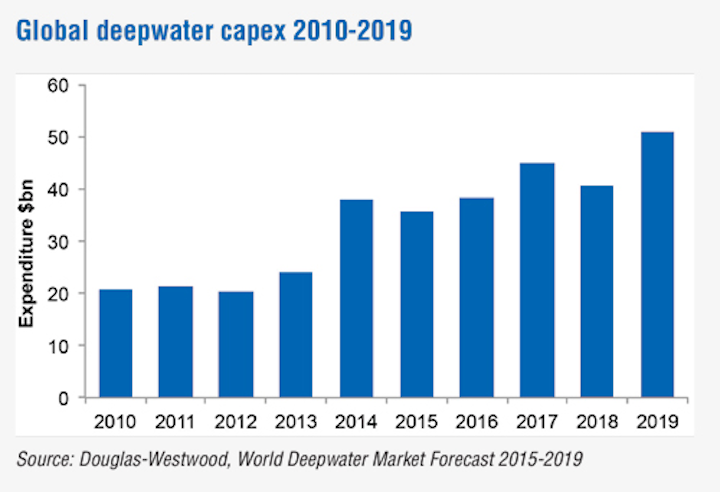 In recent months, oil prices have fallen dramatically, resulting in concerns over the viability of some large and ultra-deepwater projects. In addition, capital expenditure (capex) and operational expenditure (opex) have also been on the rise, placing further pressure on budgets. Recently, some operators have responded by announcing reduced budgets and delaying deepwater project sanctions. Now is the time to refocus on standardization in the oil and gas (O&G) industry and reduce costs to ensure the viability of high capex deepwater developments.

It is important to note that capex reductions were already a minor focus of operators before the oil price collapse, although they are now of greater importance. As suppliers work through backlogs the reduction in component orders will increase competition and, consequently, lower costs.

Douglas-Westwood (DW) expects deepwater capex to rise post-2016, driven by the continued development of deepwater fields off Latin America and West Africa, as well as new developments off East Africa. However, in the short term, delays as a result of the oil price are causing significantly slower growth than was expected a year ago.

Deepwater exploration and production (E&P) activity is driven by a variety of supply and demand-side factors:

As production from mature basins onshore and in shallow water declines, development of deepwater reserves has become increasingly vital. Plunging oil prices have increased concerns in the sector, leading to calls for standardization and some contract renegotiation.

Large deepwater fields such as the natural gas discoveries off East Africa and the recent Orca field off Angola require capex-intensive solutions; however, they could provide a large return on investment.

The deepwater market requires significant and continued investment in infrastructure. While the economic feasibility of deepwater fields vary, oil prices of $80/bbl (WTI) over the long-term will ensure viability of most deepwater developments.

However, despite low oil prices, a number of projects have continued development. Notable examples include Maersk's Chissonga and Eni's Sankofa developments.

Project execution challenges continue due to low commodity prices and are likely to cause widespread delays and cancellations to deepwater projects, especially in high capex regions such as the North Sea. Strictly enforced local content regulations exacerbate issues with timely project delivery in West Africa and Brazil due to a lack of engineers with extensive industry experience. 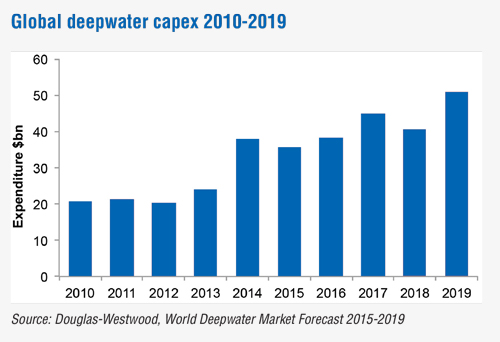 Douglas-Westwood expects deepwater expenditure to grow by almost 69% compared to the preceding five-year period, totalling $210 billion between 2015 and 2019.

This growth is driven primarily by Africa and the Americas, which account for 82% of capex. Continued development of traditional deepwater regions, West Africa, Latin America and GoM, coupled with the emergence of East Africa, drives growth over the forecast period. North America remains a key deepwater region despite a reduction in capex over the next five years.

We have identified a trough in expenditure in 2015 which is primarily driven by the collapse of Brazilian operator OGX in 2013, which resulted in numerous local project cancellations.

The current low oil price environment is expected to slow the deepwater market, through reduced project sanctioning in the short term. Notably, installations in 2018 are expected to be impacted. Projects already under construction are unlikely to be affected, but there will be delays to numerous projects that are not sanctioned yet. Consequently, deepwater capex is expected to be limited in the short term. However, an expected oil price recovery over the mid-term will see increased capex outlay from 2019.

In addition to the low oil price environment, the lack of rig demand will impact capex growth over the forecast. In recent years, record deepwater rig demand has resulted in an unprecedented level of rig orders.

This has then triggered the recent build cycle which has brought about a sharp growth in rig supply that will take time to be absorbed by the expected long-term growth in demand.

E&P operators take a long-term view of deepwater projects, and following decreases in oil prices, operators merely delay rather than cancel projects. Oilfield analyst firm Evercore ISI estimates that global E&P budgets will decrease by a total of 15-20% during 2015. However, if oil prices continue at their current depressed levels, spending will decline even further with the greatest impact in North America. 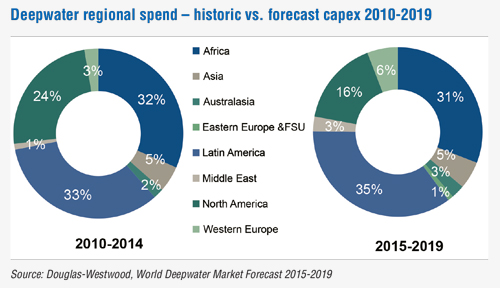 Latin America continues to be the largest deepwater region by total capex over the forecast period. However, the region will be adversely impacted by numerous issues including delays in the delivery of Petrobras' FPSOs and the ongoing corruption investigation. The corruption scandal has primarily impacted local contractors involved in the fabrication and integration of these units, and could postpone the start-up date of some fields.

Mexico shows much promise after reform of its energy sector to allow foreign upstream participants. The first licenses are expected to be awarded this year and the vast area of unexplored acreage is expected to yield deepwater finds and perhaps even reverse Mexico's production decline, though this is not expected over the forecast period.

East Africa is a potential deepwater natural gas hub - discoveries in Tanzania and Mozambique are expected to come onstream toward the end of the forecast period. Development of these fields has not been aided by the plunge in Asian gas prices. The development of East African gas basins is, however, inevitable as expected future recovery of oil prices will spark a revival in LNG-related activities in the region.

Australasia is expected to experience the fastest growth in capex globally (36% compound annual growth rate, or CAGR). Despite this, Australasia will still remain the second smallest deepwater region. The Middle East will grow second fastest (25% CAGR), while Western Europe's capex is expected to grow at a CAGR of 22%. Asia will remain an integral part of the deepwater market outside Africa and the Americas.

The cancellation of the South Stream gas pipeline has caused the Eastern Europe and FSU market to shrink over the forecast period in a region with limited deepwater production potential.

Drilling and completion (D&C) represents by far the largest segment of the deepwater market with expenditure totalling over $81.5 billion, the majority of which will be spent on subsea well completions. DW forecast capex on D&C will grow at a CAGR of 3% between 2015 and 2019. The greatest number of wells drilled will be located off Africa; although the greatest levels of capex will be in Latin America due to lengthier drilling and completion times in this region.

Floating production systems (FPS) account for the second largest segment of deepwater capex, with over a quarter to be spent on FPS units. FPS capex is dominated by Brazil with almost half of the total FPS expenditure expected from this one country. Deepwater expenditure on FPS units will primarily be on FPSOs, which account for almost 80% of forecasts FPS expenditure. DW forecasts FPS capex to grow at a CAGR of 12%; however, the low oil price environment is causing operators to revaluate development plans for fields ultimately leading to project delays.

Operational costs are also rising, placing further pressure on operators. In addition to the capex spent on developing new discoveries, operators must maintain their existing assets, in order to prevent problems occurring, remedy underperformance, and address the effects of emergency shutdowns or to extend asset life. Key drivers of maintenance modification and operational (MMO) spend are the age of infrastructure, increased size and complexity of offshore platforms, new platforms, and pricing.

In 2014, demand for offshore MMO services in shallow and deepwater totalled $95 billion. DW expects this to increase between 2015 and 2019, driven predominantly by aging infrastructure requiring maintenance and modification to maintain production levels.

The MMO market is more robust than those led by capex: oil price fluctuations do not generally have the same level of impact on operational and maintenance expenditure compared to capex-related activities such as drilling and field development. This is mainly due to MMO being vital to ensuring ongoing production levels, the revenue stream for offshore operators, are maintained.

In addition to the low oil price environment, the lack of rig demand and building oversupply will impact capex growth over the forecast period. In recent years, record deepwater rig demand has resulted in unprecedented levels of rig orders. Latin America continues to lead investment in deepwater activity despite the corruption scandal and Petrobras' ongoing financial struggles. As a result, delays in the delivery of Petrobras' FPSOs are expected.

Regions such as the Middle East and Western Europe - with historically low levels of deepwater activity - will experience considerable growth over the next five years, primarily due to the installation of major deepwater trunklines. Despite imminent project delays, the deepwater market is now poised for a period of growth, with capex totalling over $214 billion between 2015 and 2019.

The current low oil price environment will increase pressure on deepwater projects; however, the viability of these developments is typically calculated over the long term. Currently, industry consensus indicates that an oil price recovery is expected in the mid- to long term. While the economic feasibility of deepwater fields varies, typically long-term oil prices of $80/bbl ensure the viability of the majority of developments. •

The author
Mark Adeosun is author of "The World Deepwater Market Forecast, 2015-2019." Adeosun joined Douglas-Westwood in 2013, and has since conducted research into various oil and gas projects, with a focus on offshore drilling and deepwater activity. He holds a BSc degree in geology and a master's degree from the University of South Wales in geographic information systems.