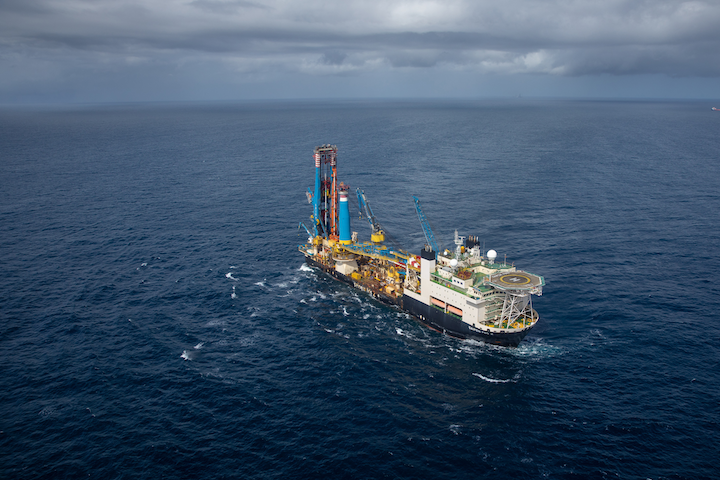 Guyana’s first offshore oilfield project, Liza Phase 1, is on track to start production early next year. The deepwater development, 190 km (118 mi) offshore in the Stabroek block, should have a transformational impact on the Caribbean nation’s economy. It could also serve as a benchmark for the entire offshore industry, due to the strong co-operation between operator ExxonMobil, its partners, and the project’s principal contractors. Most of the same players are involved in the Liza Phase 2 development, and the technical and organizational solutions that they have devised could be re-applied or adapted over the next few years for projects on other discovered fields in the block.

ExxonMobil commissioned TechnipFMC to supply subsea production systems for the 17 Phase 1 wells, comprising eight producers, six water injectors and three gas injectors. Saipem is the other main offshore contractor, the scope of its contract including design, supply and installation of the six steel catenary risers (SCRs), flowlines, jumpers and ancillary components; and installation of five manifold structures controlled by five umbilicals, and all other subsea hardware and associated control equipment. The company has deployed the Saipem FDS2 as its main installation vessel for this campaign, supplemented by its newest vessel, the Saipem Constellation. DOF Subsea and a flotilla of smaller vessels are supporting some of the subsea activities.

Liza Phase 2 is a similar, but larger-scale development and the first to feature SBM Offshore’s standardized Fast4Ward FPSO hull design. The Multi-Purpose Floater (MPF) will be fabricated at the Shanghai Waigaoqiao Shipbuilding yard in China, with topsides integration and installation performed at Dyna-Mac and Keppel Shipyard in Singapore, under SBM’s supervision. The completed vessel will have capacity to produce 220,000 b/d of oil, treat 400 MMcf/d of associated gas and inject water at up to 250,000 b/d. 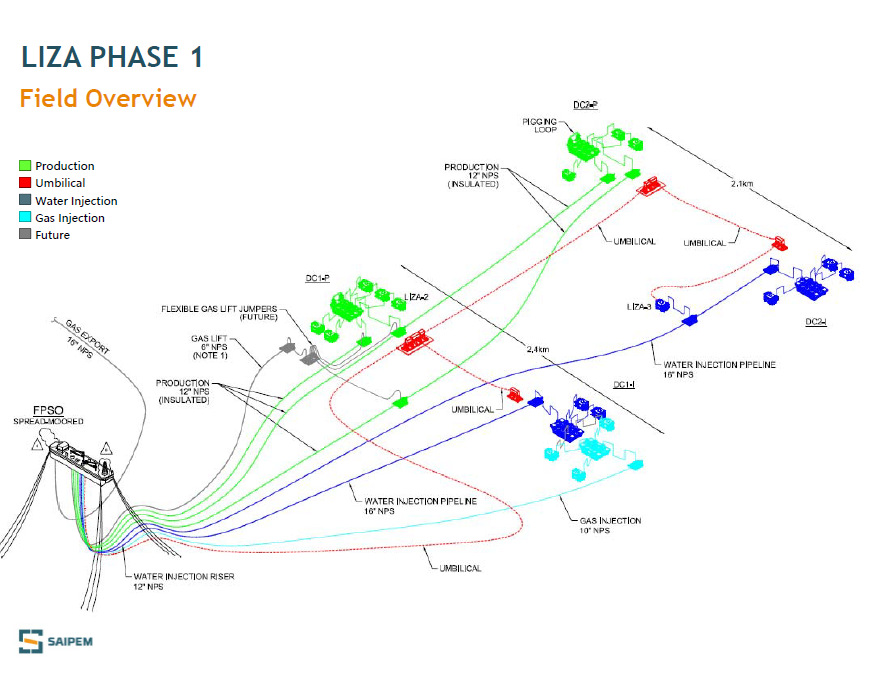 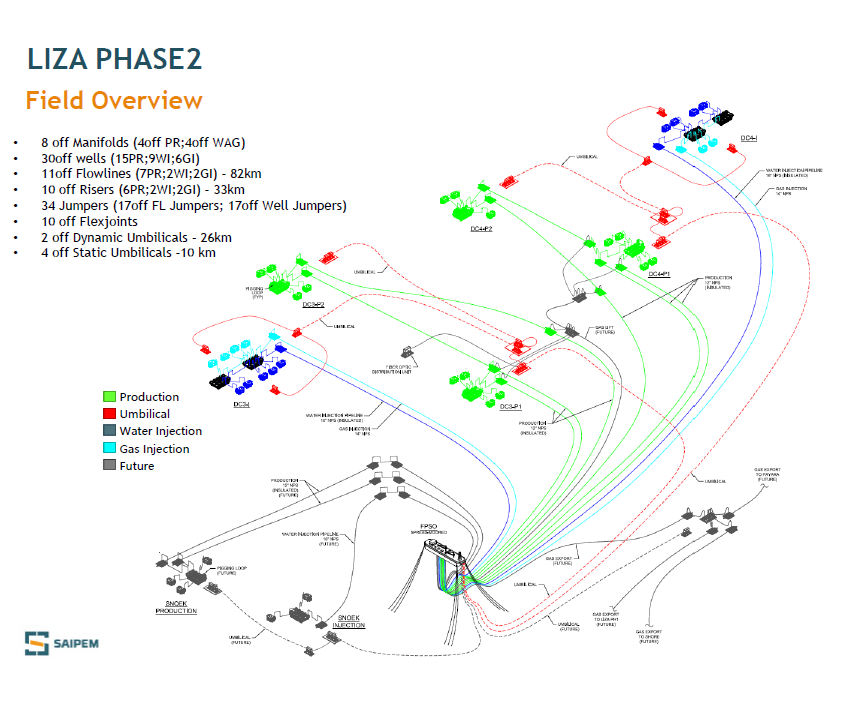 Saipem’s involvement in Phase 1 started in late 2016 when the company supported conceptual design of the risers, including verification of the proposed construction method. The full SURF EPCI contract award followed in 2017.

Early last month, the company had achieved over 80% progress for Phase 1, with its newest vessel the Constellation heading to Guyana to pull the pre-laid risers from the seabed for pre-commissioning and hookup to the Liza Destiny. The Constellation is also due to install the main umbilicals, and to connect the subsea pipelines and infrastructure to the FPSO. By now the company’s work on the project is in its final stages, according to Giorgio Martelli, CEO of Saipem America.

“Phase 1 has been a pioneering project for the way that ExxonMobil has set up its contracting strategy,” Martelli told Offshore. “Phase 2 is a bigger version but similar, with no essential differences in terms of the topology, offshore assets and the technology deployed.

Following extensive front-end engineering design (FEED) to ensure that Phase 2 would be feasible, the Stabroek block partners took a final investment decision to proceed with the project in May 2019. “ExxonMobil was looking to continue working with the same contractors, its strategy based on ‘best in class’,” Martelli explained. “And this approach is working because of the required co-operation and synergies between the client and the contractors. This is vital in Guyana, an undeveloped country in terms of oil and gas infrastructure, which did not even have a jetty to load equipment when planning for Liza started.

“Another of ExxonMobil’s requests has been to leverage in-country local services, and Saipem has put forward a bold plan in this regard for Phase 2. For Phase 1, the company did the maximum possible to ensure in-country involvement in tasks such as pipe storage and movement of materials by partnering with a local logistic company, John Fernandes, for a local shore base and all the while managing their growth into this new industry. In Phase 2, some of the jumpers will be fabricated in Guyana. But a lot of industrial infrastructure still needs to be organized, trained and qualified to international standards in order to boost local content in future offshore projects.”

Saipem has subcontracted fabrication of some of its SURF structures to various sites in North America, Europe and Asia, and has followed ExxonMobil’s lead by forming partnerships with its main suppliers to ensure continuity and synergies for both Liza phases. One of the suppliers is Shawcor, which built a new plant in Veracruz, Mexico, dedicated to polypropylene insulation (applied in this case for coating of the production flowlines). Sumitomo in Japan is manufacturing linepipe for both projects. Other key contributors include New Industries and Gulf Island Services in Louisiana (fabrication of the flowline and pipeline termination structures). 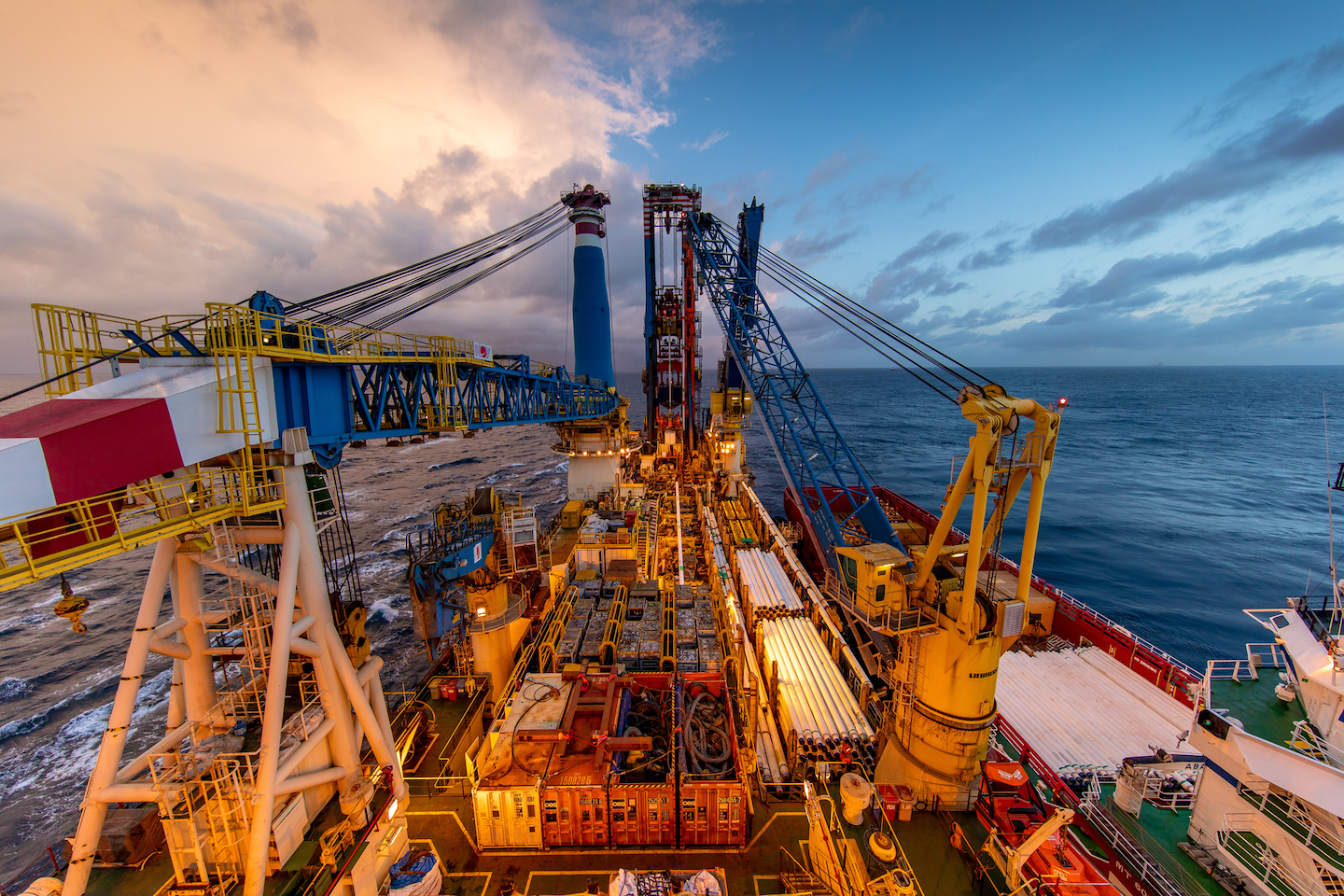 The onboard vessel photo shows J-lay operations from the Saipem FDS2.(Courtesy ExxonMobil)

According to Martelli, installation of the buoyancy system during J-lay operations from the FDS2 is challenging but not unprecedented. “But in this case, we went one step further. Buoyancy typically requires technicians onboard the vessel to physically install the buoyancy modules on the pipe working under high tensioner loads. We decided to design out that risk via a large, automated ‘arm’ which lifts the buoyancy modules, clamps them onto the pipes and then tightens the bolts, without the need for crew direct intervention. This system was designed from scratch and has been fitted to the FDS2.”

“Saipem has also designed and built a custom machine for the pipe field joints coating process on the vessel. ExxonMobil stipulated injection-moulded poly-propylene (IMPP), and there was no existing system that could fit onto our vessel (although there are versions for onshore application). We had to design a purpose-built system that could perform insulation of J-lay field joints after welding. It is a very complicated process, but it did operate successfully on the Phase 1 flowlines. We do, however, plan improvements to the system for re-use in Phase 2.”

The Constellation will raise and hook-up the risers for Phase 1 to the FPSO in a relatively standard lazy-wave configuration, Martelli said. 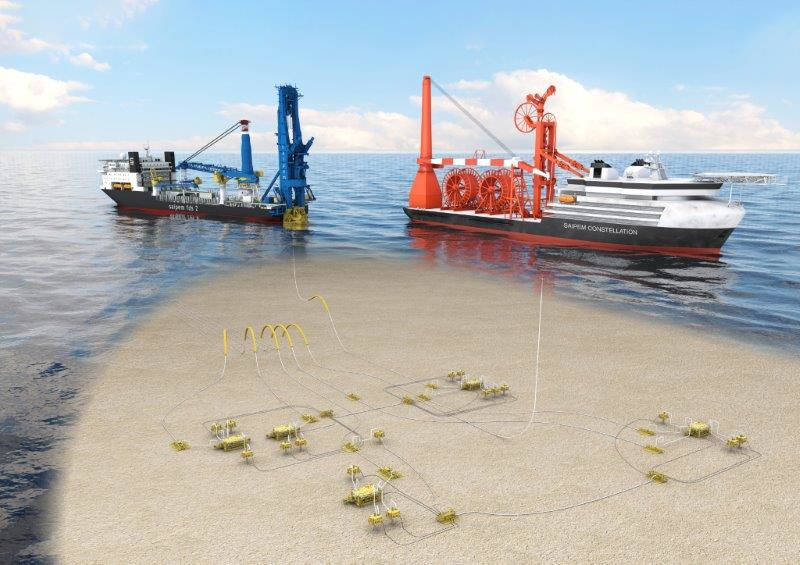 The two vessels are the Saipem FDS2 and the Saipem Constellation, which collectively are handling the Liza Phase 1 and 2 subsea installations.(Courtesy ExxonMobil)

As for conditions out in the field, there had been no prior development experience off Guyana, and operations have been so far more demanding than had been expected. “Our crews encountered heavier seas for a longer period, with high waves, especially during June and July. Conditions improved in August, but still with a nearly constant significant wave height of 2-2.6 m (6.5-8.5 ft) altogether, although we did find a way of dealing with this. The North Brazilian loop current normally stays off Brazil to the east, but some spin-offs can reach Guyana, and this can impact the stability of the pipe tensioners.

“We are continually gathering more and more environmental data during our offshore operations and using this to refine our engineering studies. ExxonMobil in turn takes our data and refines it for planning of future development phases. Jointly the project also receives data from the drilling rigs that are currently operating on the Stabroek block.”

ExxonMobil has implemented a One Team approach, involving a multi-disciplinary collaboration and shared vision between the company and its EPC and drilling contractors. Regular team meetings this year have led to recommendations on offshore installation priorities and avoiding downtime through Simultaneous Operations (SIMOPS).

“From the beginning, ExxonMobil has been very strong in pushing an intense interface effort, mainly between ourselves, SBM and TechnipFMC,” Martelli said. “It has organized a project leadership team, with the leaders and engineers of the three contractors going through detailed design interfaces and operational planning.

“Among the main benefits of these collaborations are ensuring that there are no surprises offshore, which in a place like Guyana would be extremely challenging and expensive. Everything needs to work like clockwork.”

Last month ExxonMobil and SBM Offshore signed a long-term agreement covering potential future FPSO orders. Although the announcement did not specify orders for more Fast4Ward hull floaters for future projects offshore Guyana, the operator is working together with the main Liza contractors to examine potential solutions, technical requirements, schedules and economics for a third project on the Stabroek block, focused on the Payara oilfield discovery, Martelli said. “My understanding is that ExxonMobil is looking for a long-term partnership...and the company is also looking at other projects to come in the future.” •