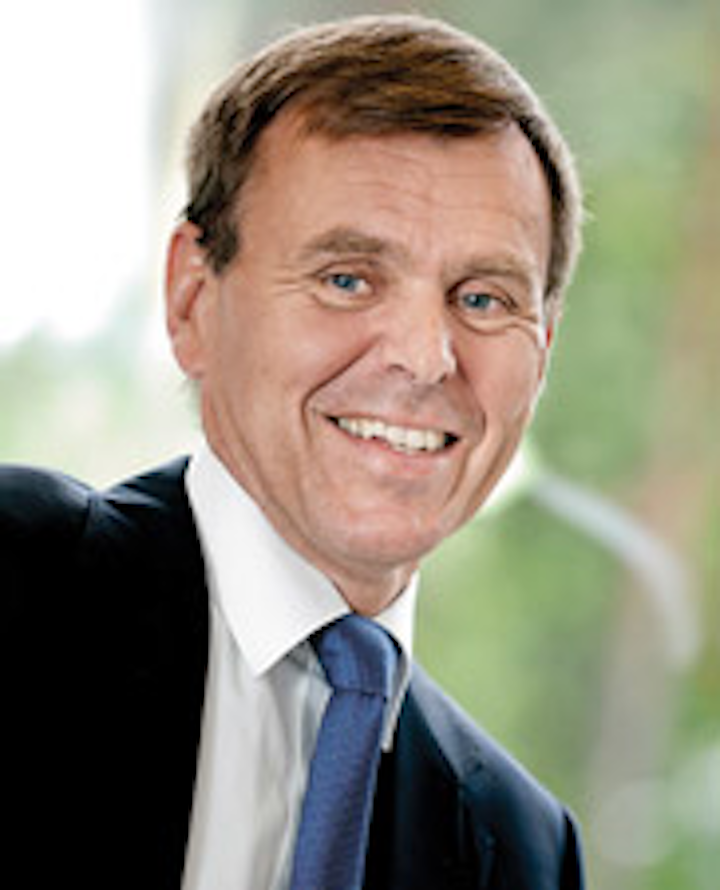 DNV GL Group has appointedRemi Eriksen as group president and CEO. He is succeeding Henrik O. Madsen, who is retiring on Aug. 1. The company also has appointed Tor Svensen as group executive vice president.Knut Ørbeck-Nilssen will succeed Svensen as CEO of its Maritime business area.

AFGlobal Corp. has promotedCurtis Samfordto president and CEO. He succeeds Gean Stalcup, who has been named chairman of the board.

Ceona has promotedMark Preece to CEO. He succeeds Steve Preston, who after 40 years in the industry has decided to retire from operational management.

Afren has appointedDavid Thomas as CFO. Darra Comyn has resigned as group finance director of the company.

Lloyd's Register'sRichard Sadler has decided to step down as CEO at the end of 2015, after eight years in the role. The Lloyd's Register Group Ltd. board of directors has appointed current CFO, Alastair Marsh, as his successor.

FairfieldNodal has appointedCharles W. Davison Jr. as president and CEO. He succeeds Walter Pharris, who is retiring after 35 years but will continue to serve as chairman of the board of directors.

Statoil has electedØystein Løseth as chairman of the board of directors, and Roy Franklin as deputy chair.

Ensco plc has namedPaul Rowsey as non-executive chairman of the board of directors.

Henrik Lundinhas joined the TAG Oil Ltd. board of directors.

Doug Oberhelmanhas been elected to ExxonMobil's board of directors.

Stallion Oilfield Holdings has namedDavid C. Mannon as president and CEO and a member of the board of directors.

Steve Bertone has joined the Sparrows Group to head up its operations across the Americas.

Seven Group Holdings has electedDavid McEvoy to its board as a non-executive director.

Ross Philo has joined Energistics as president and CEO.

Exova has appointedMaurice Walrave as general manager of its Netherlands oil and gas facilities.

Ronnie Grimberg has joined FairfieldNodal as sales manager for Central and South America.

Trelleborg has appointedPaul Welling as regional president for the US.

Peterson has appointedLoek Sakkers as director of projects and Stephen McCrindle as supply chain manager, within its offshore business.

Vince Stewart has joined Patterson Tubular Services as director of operations for the facility in Channelview, Texas.

Emirates National Oil Co. (ENOC) has reached an agreement to acquire the entire share capital of Dragon Oil for £3.7 billion ($5.7 billion). Dragon's board has recommended that its shareholders approve the offer which will be conducted by way of a contractual takeover offer. Assuming ENOC reaches a threshold of 23% of Dragon shares, it plans to de-list the company from the Irish Stock Exchange and the London Stock Exchange.

Aqualis Offshore has established an office in Aberdeen, Scotland. The company also has been reappointed by United India Insurance Co. to provide marine warranty services to the Oil and Natural Gas Corp. Ltd. offshore India. The operations include review of rig move documentation, issue of certification, and onboard attendance.

Applus RTD has opened an office in Corpus Christi, Texas.

Penspen has opened an office in Basra, Iraq.

eDrilling has opened eDrilling US Inc. in Houston. The new entity will provide software and services related to its drilling and well performance offerings.

Tendeka has opened a global completions, manufacturing and operations facility in Fort Worth, Texas.

IRM Systems has opened a new base of operations in Houston.

Inchcape Shipping Services has expanded its operations in Africa with the opening of new offices in Maputo, Mozambique.

Training groupOPITO has opened a new office in Cyprus, from where it will help the country develop and explore its offshore hydrocarbon resources. The company plans to roll out many of the skills initiatives and tools that it has developed in the UK, working with education, government, and academia in Cyprus to generate awareness of the opportunities in the oil and gas sector; ensuring university education is aligned with specific job roles in oil and gas; and providing training to transfer existing skills among Cypriots to those needed for oil and gas activity.

TheNational Ocean Industries Association has presented SEACOR Marine with the 2015 NOIA Safety in Seas Culture of Safety Award and Safety Practice Award. This is the first time the same company has won both awards in the same year.

Siemens has opened its new oil and gas headquarters in Houston.

Mitsubishi Heavy Industries Compressor International Corp. has begun operation in the US at its facility in Pearland, Texas. The complex, also known as Pearland Works, currently handles packaging, shipping, storage, service, and maintenance of compressors and mechanical drive steam turbines.

ROVOP has established a Western Hemisphere headquarters and support base in Houston.

Offshore Independentshas moved to a new office in Rotterdam, the Netherlands.

Mokveld Valves BV has opened its new head office in Gouda, the Netherlands.

Intellianhas opened a second R&D center in Seoul's Technology Valley, in conjunction with the relocation of its administrative office from Gangnam.

TAM International has opened a new office in Norway.

ACE Winches Norge AS has decided to relocate the Dusavik office to Forus, Stavanger.

Tenaris has expanded its service center in Esbjerg, Denmark, with a new pipe yard that has a storage capacity of 14,000 tons.

Logistics groupPeterson and environmental services provider Veolia will invest £1 million ($1.57 million) in a new, purpose-built decommissioning complex in Great Yarmouth on England's east coast. The site, with support funding from NewAnglia LEP, will offer operators in the southern North Sea a full decommissioning service. It will be located on the recently developed Outer Harbour at Great Yarmouth port, allowing topsides, jackets, and subsea equipment to be offloaded for dismantling and recycling.

Unique Group has collaborated with KBA Training Centre based in Singapore to offer a series of health, safety and diving courses in the United Arab Emirates. The courses that will be delivered in are NEBOSH, IOSH, CIEH, IMCA and other bespoke trainings in the offshore marine, diving and safety industries.

GE Marinehas opened its improved Dynamic Positioning Operator (DPO) Training, approved by the Nautical Institute, in its Houston Marine Technical Training Center. The upgraded GE facility meets Class A standards by providing a more realistic training environment - the state-of-the-art visualization system re-creates the view out of the ship navigation bridge. The DP training room has complete maneuvering control and navigation systems. It is designed to operate with two generations of GE's DP systems, where the instructors can rapidly change out between C-Series DP and the company's latest SeaStream DP system.