New year should see light at the end of the tunnel

Entering 2017, many industry observers may be so obsessed with shale and shale production that they miss what has been a major two-year restructuring, rethinking, and realignment of the offshore, particularly the deepwater, market. 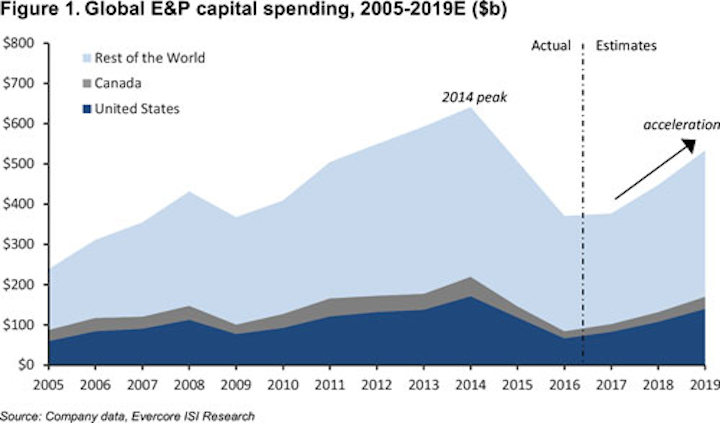 Capex expected to increase for first time since 2014

Entering 2017, many industry observers may be so obsessed with shale and shale production that they miss what has been a major two-year restructuring, rethinking, and realignment of the offshore, particularly the deepwater, market. Following a once-in-a-generation recession, the industry has reformed, reimagined, realigned, and will prove to be a significant source of global oil production in the years to come. Offshore is not dead - offshore is alive and well and poised for recovery.

As it is frequently said, “the cure for low oil prices is low oil prices.” The cycle has evolved as normal oil cycles do: Supply is pulled from the system as the lower oil prices re-allocate capital and spur incremental demand. Despite the severity and depth, it has been a cycle like the others, and it always looks the worst at the bottom of the capex cycle, a sight that is now in the rearview mirror. The market finally has visibility into a capital spending inflection point and the recovery, a notion supported by the recent (and robust) offshore share price rallies. Nearly two years ago, an OPEC non-agreement accelerated the onset of the downturn. Two years later, an OPEC agreement punctuated the conclusion of the downcycle and jumpstarted the impending upturn. While the upturn was expected to commence regardless of OPEC action due to strengthening fundamentals, the agreement simply accelerates the inevitable turn of the cycle. The recovery is expected to unfold in predictable fashion: North America will rebound first and the strongest, followed by the international markets, where the rebound will be more methodical. Offshore markets will likely be the last to recover.

In the wake of a historic downturn, Evercore projects global E&P capex to increase by 1.7% in 2017, the first increase since 2014. Global upstream spending fell by 27% in 2016, following a 21% fall in 2015, to reach its lowest levels since 2009. This two-year stretch marked the first consecutive annual decline since the mid-1980s. It is with great pleasure that we can now empirically proclaim that 2017 will be a better year for the oilfield services industry, led by a significant rebound in E&P spending in North America. Unfortunately, spending for offshore projects are likely still in decline, at least through the first half of 2017 when the industry should find an activity bottom. At least the bottom is near. 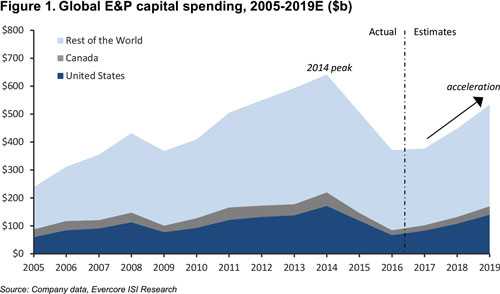 The industry has undergone a major transformation in the last several years with alignments emerging across the oil service and equipment industry. The most recent event is, of course, the tie-up between GE Oil & Gas and Baker Hughes. The major issue with deepwater projects has always been too many chiefs at the table with competing agendas. The industry needed to move to a collaborative model and Evercore ISI believes this is unfolding. By working together, not as company man and suppliers, but as a cohesive unit dedicated to delivering production at a lower costs and a shortened time-period, the market would not only be there, but it could expand. To create market is the dream of all. It is believed that the first signs of this can be seen unfolding.

Large national oil companies with offshore operations and independents with offshore plays almost all view deepwater as viable, economic, and a part of their portfolios going forward. None have disbanded their offshore or deepwater teams. In fact, they are currently in the process of dusting off exploration successes and engaging with the drillers, the service providers, and the equipment suppliers to understand the new cost structure and collaboration models. They plan to force rank their projects, with many final investment decisions to be made in the first half of 2017. The oil companies are supportive of the new models being explored and tried. They understand the industry needs to change, including themselves. They are also wary of their production profiles in 2020, 2021, and 2022. They have to push “go” on major projects or risk massive production slides. The latter is not acceptable. The industry should be prepared for numerous project sanctions and of course service and equipment company wins next year.

While “wins” should emerge, that is not to suggest that 2017 will be an easy year for the offshore industry. The year will be tough. Offshore asset utilization will continue to slide. Many more restructurings will occur. Dayrates will roll lower and utilization, at least through mid-year will in general lessen. More rigs and boats will be retired. Even industry leaders are not immune to the severity of this downturn. The questions about the viability of offshore markets will remain. But patience is a virtue. The recovery will emerge. The good days will come again.

James West is a Senior Managing Director at Evercore ISI. In that role, he is responsible for the research coverage of the oil services, equipment and drilling industry consisting of detailed fundamental research on almost 60 companies.