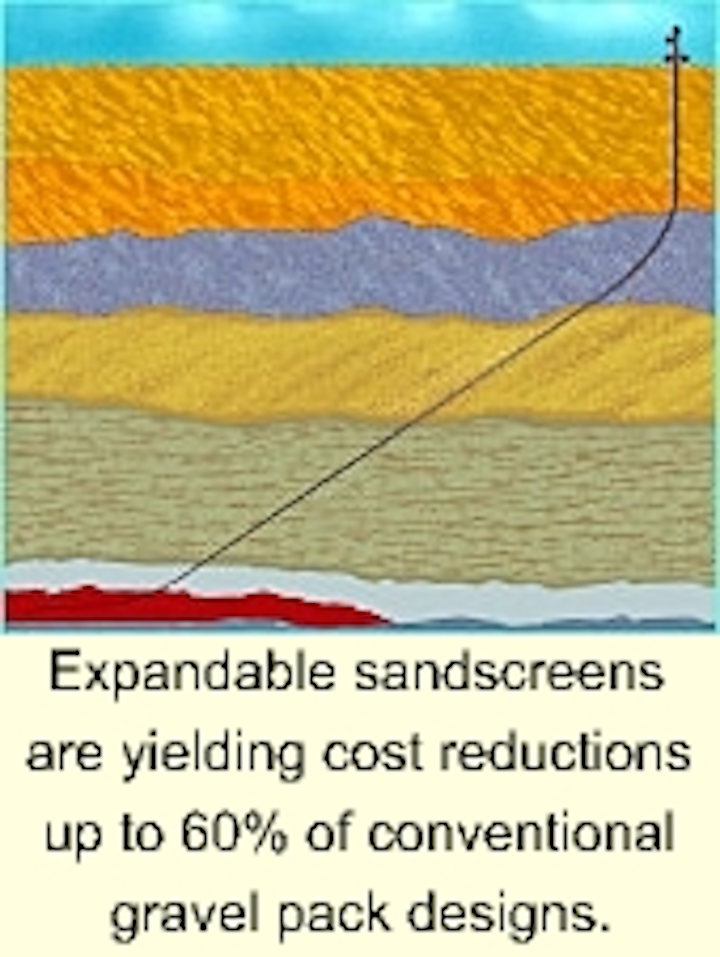 Expandable tubulars and associated products have been drawing more attention from oil and gas producers in the past year. Baker's E2Tech and Halliburton's Enventure, both licensed by Shell to develop expandable casing tech nologies, are finally introducing different, independent solutions.

The technology involves "drifting" the ESS through small internal diameters (ID), then expanding it from the top-down, unlike expandable casing, which is expanded from the bottom up. Increases in ID as great as 200% can be realized with the appropriate filter media. Technology benefits include:

Particular attention has been given to keeping running procedures and the associated equipment as standard as possible. "There's no new handling gear or any special techniques in use right now, explained Paul Metcalfe, Product Manager - Expandable Systems. "With something as radical as this, you only want to have to worry about your own equipment and not attempt to re-invent the way we complete wells overnight."

The first question reservoir and production engineers will ask is, "What happens to the ESS performance in unconsolidated sand formations?" The answer is in the proven field examples to date, and the history of the technology. Two of the seven ESS installations to date have been in unconsolidated sands, with the other five installed in friable sands that historically showed transient mode failure tendencies.

A typical ESS can exert internal support pressures of 155 bar against the wellbore before deformation of the screen begins. Taking into account the huge multiplication factors mentioned above for consolidated and unconsolidated formations, this results in substantial supporting effects on the formation, and therefore increases in relative rock strength.

The best tool available to the operator in ensuring successful deployment and operation of an ESS is attention to detail in the drilling phase of the well. Normally, a gauge hole is preferred. Good drilling mechanics, practices, and the right choice of drilling equipment will greatly enhance the chances of optimal installation.

The increased use of rotary steerable tool technologies should help improve ESS instal lation performance. These tools drill a "gun barrel" gauged hole, with little to no ledging in the wellbore. This is highly favorable for an ESS installation. The added cost of this drilling technology may be easily recovered if successful installation of the ESS is achieved.

Pre-job screen performance testing with sands from the fields under consideration for ESS installation has proven very beneficial. This, and a very wide selection of filter apertures, have allowed the best overall screen size to be selected for optimal mud clean up (mud solids allowed through, but sand held out). This has contributed greatly to the success rate of the installations to date.

The two most used applications of the ESS to date have been in open hole and internal gravel pack replacements. One gas well example in northern Europe had a history of sand production and a moving gas-water contact. Conventional slotted liners and screens had historically been used to complete wells in this very layered reservoir of fine-to-coarse sandstone and interbedded shales. Watering-out had always been a problem, in both young and old wells alike. Water shut-off in the conventional completion strings was costly and time consuming, with less than optimal effect.

After careful pre-job testing with the proposed drilling mud, a 270-micron ESS was selected, yielding a permeability loss of only 3% in flow-back tests. The drilling program called for drilling the reservoir section in one pass and limiting circulating time. This would effectively reduce the exposure of the wellbore to high volumes of fluid circulation, and the resulting hole washouts, before running the ESS.

The ESS assembly was run in the hole, expanded at a consistent rate of 7 meters/ minute and 5 tons of down-weight, to nine ft from the bottom of the ESS, where a formation ledge was known to be present. Expansion was stopped here, as the reservoir had been sufficiently covered by the screen.

A post well ultrasonic borehole image log (UBI) was run inside the ESS, confirming full expansion against the wellbore. Flow testing of the well yielded a gas flow close to the predicted rate of an openhole completion, indicating no screen performance impairment. ESS durability working through washouts was confirmed by no damage to the screens during installations. This was in contrast to poor performance of conventional wire-wrapped screens previously deployed in the field. The well is currently producing with no sand influx.

An ESS solution was successfully applied in an Oman well currently producing through internal gravel packs in two lower zones of a producing reservoir. Re-completion of an upper zone was researched and found to be uneconomical with conventional gravel packing techniques. Gravel packs to date had exhibited rapid production decline rates, up to 50%, soon after completion. Standard screens would not work because of the existing sand production and the annulus due to these screens.

Pre-job testing produced the optimal filter media size for the ESS. The new upper zone was then perforated via tubing conveyed perforation (TCP) guns. The 12 SPF @ 45° shot arrangement in the sandstone lithology was used to optimize reservoir-to-ESS communication. The ESS string was designed to seat as close to the existing completion packer as possible. The final separation between the packer and bottom of the ESS string was 0.5 meters. After stabbing the existing packer, setting down to engage the anchor, and snapping-out of the snap latch, pressure testing was performed and completed; then the assembly was pulled out of the hole.

Expansion of the ESS was controlled at a rate of 3 meters/minute and a constant 10-12 tons of weight. Full expansion was achieved with the expansion cone bottoming out in the screen to a weight of 20 tons string weight. A 53% increase in well production, with no sand production, was immediately realized.

Shell Nigeria, SPDC operations, successfully installed and expanded more than 1,130 ft of a 4-in. ESS. The ESS was expanded to fill a 7-inch horizontal wellbore in a process that took less than 50 minutes. The success of the first ESS in a horizontal well builds upon the company's no-failure operational record. By the end of January 2000, one open hole and six more internal gravel pack replacements with an ESS will be completed.

All-metal sand screens, from 2 7/8-in. to 4 1/2-in. in diameter, have been expanded with the greatest expansion showing a 57% diameter increase. Non-metallic fiber media will yield even greater expansion capabilities. Diameter increases over 100% of original diameter can be realized with non-metallic media. As expandable sand screens become more popular, and more within the comfort zones of production and reservoir engineers, the non-metallic screens will offer a viable completion option.