Tribon Solutions (formerly Kockums Computer Systems) recently took a step into the world of e-commerce with the launch of its 'Internet Marketplace' - Tribon.com. 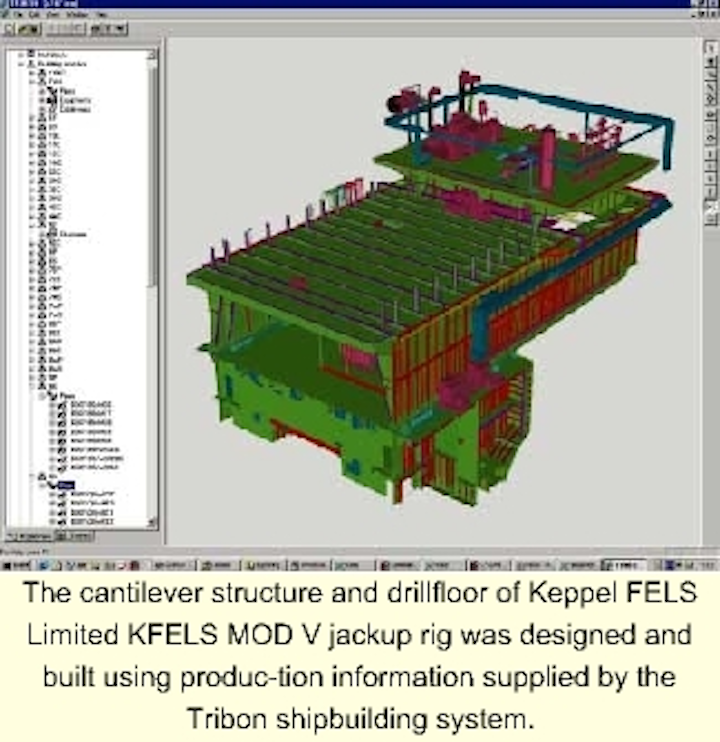 Tribon Solutions (formerly Kockums Computer Systems) recently took a step into the world of e-commerce with the launch of its 'Internet Marketplace' - Tribon.com. The company has added a new dimension to its well-established Tribon system: now, shipbuilders and suppliers of materials, equipment and components will be linked through the Internet, enabling a more effective integration of their products and services into the design and construction process, also making procurement more efficient.

At the core of the Tribon system is a 3D CAD modeling capability, specifically tailored to the demands of shipbuilders. Surrounding this is a series of IT tools intended to support the broader project management process, covering planning, reporting, materials and data handling and document control.

First developed for internal use by Kockums, the software package was made commercially available during the 1970s. The Tribon name was first introduced in the 1990s and several versions of the tool appeared during the decade. The latest is Tribon M1, based on an MS Windows platform.

Per-Olof Nilsson, responsible for research at Tribon Systems, considers that the tool has two main advantages:

"The feedback from shipyards is that use of the system results in quality improvements," he says. "For one thing, the amount of reworking and improvization needed at the manufacturing stage is significantly reduced. This definitely gives shipyards the chance to turn out better vessels." Tribon is used by around 290 shipyards and design houses and is estimated to have captured around 40% of the global shipbuilding market. Its nearest competitor comes a long way behind.

The increasing emphasis on ship-based drilling and production systems in the offshore industry is bringing the company into greater contact with the major oil and gas engineering contractors. For example, during the building of BP Amoco's Schiehallion FPSO, carried out jointly by Harland & Wolff and Brown & Root in 1998, the former used Tribon to help them design the hull and the latter its own process design and management system (PDMS) for the production topsides. Tribon software engineers were responsible for the successful integration of the two packages. Basically, Tribon is suited for all kinds of floating structures and drilling rigs such as the KFELS MOD V.

Tribon had known for a long time that shipbuilders were incorporating their own databases of their more common suppliers into the Tribon software. However, the effort needed to maintain these databases restricted their usefulness.

Tribon recognized that the advent of the Internet created a tremendous opportunity to build a more comprehensive, global database of suppliers, equipment and components. Moreover, it should be relatively easy to interface the database with the Tribon system, thus significantly enhancing its power.

The decision to pursue this initiative was strongly supported by Tribon's new owners, The Sixth National Fund Board of Sweden, which has a record of investment in new technology. Tribon also brought in some very highly skilled partners. McKinsey has been involved in the analysis of the concept and the fuller definition of users' requirements; and Intentia, one of the world's leading e-commerce companies, has provided valuable support in designing the new product.

Mats Karsten, president of Tribon.com, explains that suppliers are being invited to subscribe to the Internet Marketplace and to input data on their products into Tribon's Internet database. The information needs to be in a form that is compatible with the existing Tribon software.

Shipyards and offshore construction/repair yards will be able to search the database for the materials, components, or equipment they need, choose the preferred suppliers and pull technical data directly into their design model. "It is a major step-forward in integrating the procurement and design processes," Karsten says. "We believe it will speed up and optimize the process of selecting suppliers. It should be particularly valuable at the conceptual engineering stage, when there is a need to evaluate a number of different options quickly and confidently."

Given the nature of the Internet, the task of building a database that is sufficiently comprehensive to be useful is likely to take some time. Rather than trying to address all the elements of shipbuilding process simultaneously, Karsten explains that Tribon is "going for depth rather than breadth." The initial focus was on piping and related components and systems; more recently an effort has been made to bring suppliers of heating, ventilation and cooling equipment on board.