In recent years, there has been growing interest in dynamically positioned (DP) deepwater drilling rigs. 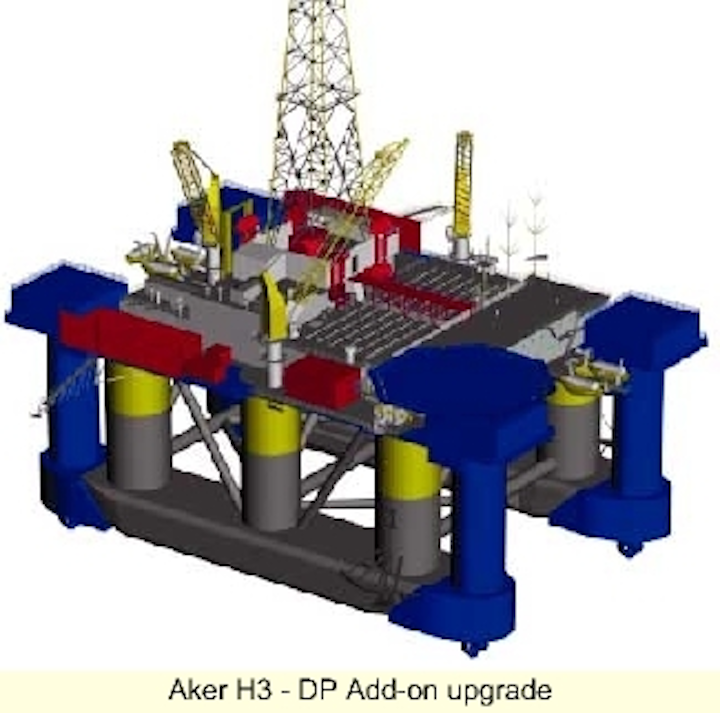 Editor's Note: This paper was presented in a longer form at the Rio Oil & Gas Expo and Conference, held in Rio de Janeiro, Brazil, in October 2000.

n recent years, there has been growing interest in dynamically positioned (DP) deepwater drilling rigs. There are two main reasons:

Newbuild deepwater drilling ships and rigs with DP have come onto the market in response, but the proportion of drilling semisubmersible units with DP remains small (around 20, of a worldwide fleet of 165). Of these, only two have been converted from moored to dynamically positioned units, namely the Noble Paul Wolff and the Petrobras 23, and even then only as DP class 2 rigs. There are various factors which have held back the pace of conversion:

There is increasing interest in upgrading second and third generation semis to DP units for mid-depth deepwater drilling. In response, GVA Consultants have developed the DP-Add-On concept. This allows for a deepwater upgrade of any two-pontoon semisubmersible and involves adding four new pre-fabricated and pre-outfitted corner sections to the semi. GVA has some practical experience, having recently managed conversion of the Petrobras XXIII from a third generation moored drilling semi with a 450-meter water depth limit to a DP unit operable in waters up to 1,900 meters deep.

Work on the new upgrade concept started in 1999, following approaches from several drilling contractors. Based on its experiences with the Petrobras project, the main challenge was to minimize the interface to the rig undergoing conversion. Key lessons learned from that project had included the following:

As stated, the DP-Add-On concept involves adding a pre-fabricated corner structure to each of the rig's four corners. All DP-related power and propulsion are included in the new pre-fabricated structures, which are pre-outfitted. Accordingly, the time during which the rig is tied up at the yard is minimized.

Each of the new corner structures features a pontoon extension, with a new thruster room, a column and a deck structure, including an engine room. The pontoon extensions and added columns provide additional deckload capacity to support the increased drilling loads and DP-related equipment weights, while the deck structures provide the extra space needed for machinery installations. Depending on the size and capacity of the semi undergoing conversion, the following capacities can generally be achieved:

Each of the four corner structures will typically house two diesel generators (1.8-3.5 MW), one high voltage switchboard, one frequency converter for a thruster AC motor, one azimuthing thruster with FP-propeller (4.5-5.5 MW), and one 450V switchboard.

A new DP control system is installed, including a rig management system. The latter is used for control of the new engine rooms and thrusters while the existing control system is kept for the existing rig. With the DP-Add-On concept, full redundancy is accomplished between the four corners, which in turn allows DP Class 3 to be achieved without further cost, barring added computers and sensors. An upgrade of the drilling system is also necessary to prepare for the increased water depths, typically consisting of:

To minimize time spent by the rig tied up at the yard, the conversion employs pre-fabricated and pre-outfitted sections. The size of these sections depends on the yard's lifting capacity, but typically each new corner structure will be divided in two sections (pontoon/column and deck) or three sections to maximize pre-outfitting.

GVA has devised a typical upgrade schedule whereby after a conceptual pre-engineering phase up to Outline Specification level, the total conversion time is around 15 months. During this period, the semi is kept at the yard for just five months; it is free to continue working in its current conventional depth mode during pre-fabrication. By contrast, the Petrobras XXIII was tied to the yard for 12 months for the conversion.

GVA has performed conceptual upgrade designs for both Aker H3 and PaceSetter drilling semis. The design has been taken up to Outline Specification level and includes stability, motion, DP and preliminary global structure analysis. The global structural evaluation has confirmed that it is possible to achieve 15 years' remaining fatigue life in moderate environments such as Brazil, West Africa and the Gulf of Mexico following the upgrade.