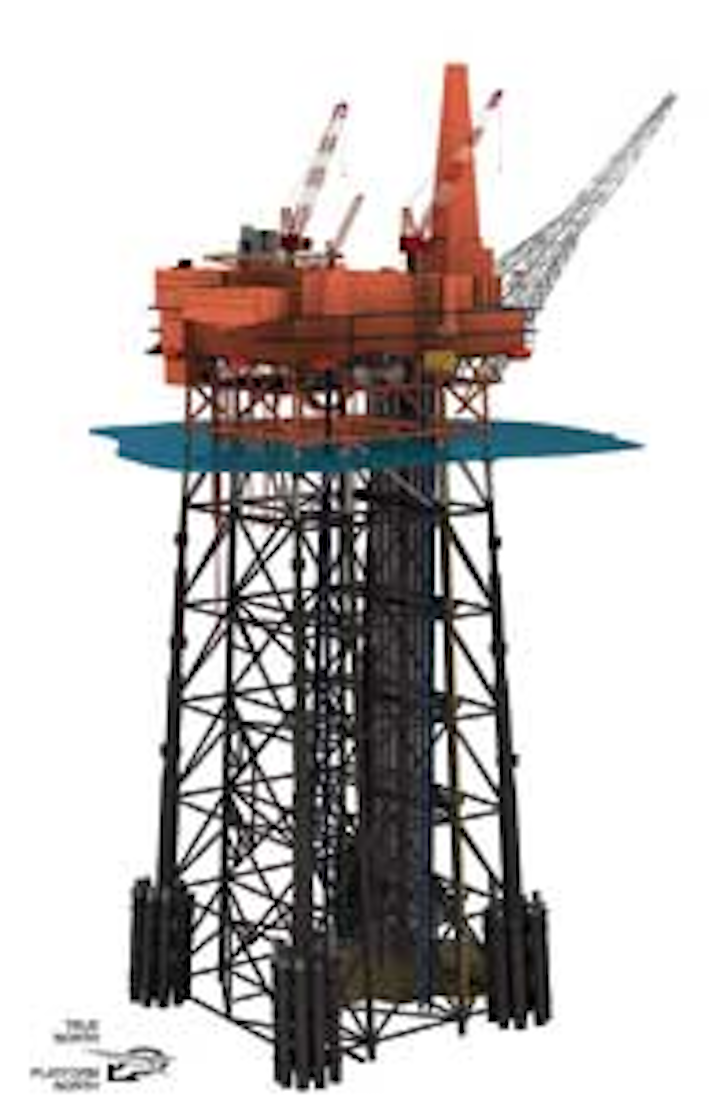 Even high oil prices cannot sustain depleting fields forever, so CNR International (CNRI) has decided to end production on the Murchison field in the UK northern North Sea. Last oil is scheduled for early 2014. In May, the company submitted a draft decommissioning program for the field, which extends partly into Norwegian waters, to the UK's Department of Energy and Climate Change (DECC). This details proposals for disposing of the field facilities. DECC will liaise in its review with Norway's Ministry of Petroleum and Energy.

One notable feature of the program is the recommendation to seek derogation (exemption) from the usual requirement to recover the jacket to shore in its entirety. Primarily for safety reasons, CNRI proposes leaving the jacket footings in place. Another point of interest is the availability of new single-lift technology which is under consideration for both the topsides and jacket removal operations.

Assuming DECC approves the request for derogation, this also needs backing from member countries in OSPAR - the Oslo-Paris convention for the protection of the marine environment of the North Atlantic. The OSPAR consultation is expected to be completed by next spring at the latest, opening the way for DECC to give its final approval by mid-2014.

In the meantime, CNRI is already preparing the main contract awards. One for engineering-down and cleaning the topsides is to be let this month (August), and tenders for both jacket and topsides removal will also be issued, according to Mike Corcoran, the Murchison decommissioning strategy consultant. Confirmation of the awards will follow approval from DECC for the decommissioning program.

Later this year CNRI will assign a contract for drilling rig activation and well plug-and-abandonment, and another with a subsea scope covering the pipelines and recovery of equipment on the seabed will be put out to tender.

Murchison was discovered in 1975, approved for development three years later via a single production, drilling and living quarters platform, and brought onstream in 1980. First oil flowed through subsea wells which were shut-in when the first platform wells came onstream in 1982. Production at that point was expected to end in 1997.

The field has changed hands several times during its production lifespan. It was discovered and developed by Conoco, which remained in charge until 1995 when operatorship passed to Oryx, subsequently acquired by Kerr-McGee in 1999. In 2002, CNRI took on Kerr-McGee's interest and became operator. The current licensees are CNRI and Wintershall; CNRI's 77.8% stake corresponds to the UK share of the field; while the 22.2% held by Wintershall represents the Norwegian share. Two further small fields have been tapped by wells drilled from the Murchison platform: Playfair, 5 km (3.1 mi) to the north, is wholly owned by CNRI, and Delta, a discovery undergoing test production on the Norwegian side, is owned by Wintershall.

The Murchison topsides, which weigh 24,584 metric tons (27,099 tons), comprise 26 modules providing facilities such as drilling, processing, water injection, power generation and other utilities, and accommodation for 198 personnel. There is also a drilling derrick servicing the 33 well slots, a flare boom, and a helideck.

The footings¸ weighing around 12,700 metric tons (13,999 tons), constitute the section of the jacket from the seabed to the top of the bottle assemblies some 44 m (144 ft) above the seabed. The jacket may be considered for derogation because it weighs more than 10,000 metric tons (11,023 tons) and was installed prior to Feb. 9, 1999. Jackets installed after that date must be designed for eventual removal.

Murchison's oil heads through a 19.1-km (11.8-mi), 16-in. pipeline to the Fairfield Energy-operated Dunlin platform, and from there via the TAQA-operated Cormorant A complex to the Sullom Voe terminal on the main Shetlands island. A subsea link into the Northern Leg Gas Pipeline (NLGP), originally built for gas export, is now used to import gas to the Murchison platform for fuel.

Before deciding to remove and dispose of the platform, the partners considered re-use options for oil and gas production and alternative uses, such as putting a wind energy generator on the topsides. None were found to be commercially viable.

The main points of the decommissioning program are as follows:

According to Corcoran, the decision to recommend partial jacket removal was primarily driven by safety considerations. "Between partial and full removal, the risk doubles. This is due mainly to the technical complexities of removing the footings, and in particular isolating and handling the bottle assemblies."

An extensive analysis was performed of the various options, including different methods of both full and partial removal. The task breaks new ground, for this is the largest jacket to come up for decommissioning to date. Moreover, there is no demonstrable track record for removing the footings of a large platform, he points out. Two other large northern North Sea platforms, North-West Hutton and Miller, have so far come up for decommissioning in the UK sector, both operated by BP. For North-West Hutton, the footings have been left in place. BP has requested the same solution for Miller, which has authorization from OSPAR, but DECC has yet to grant approval for the program.

A range of technologies is available for jacket removal, including semisubmersible crane vessels (SSCVs) such as Heerema'sThialf and Saipem's S7000, and heavy-lift monohull vessels (HLVs) such as Seaway's Oleg Strashnov and Subsea 7's Seven Borealis. Single-lift vessels (SLVs) are also under development, although only one, Allseas' Pieter Schelte, will be commercially available in time. Aker Solution's refloating method using buoyancy tank assemblies (BTAs), which was used to remove Total's 12,000-metric ton (13,228-ton) Frigg DP-2 jacket, was also evaluated.

In a comparative assessment of the possible methods of removal, partial removal scored better than full removal on all measures - safety, environment, technical feasibility, societal, and economic. With respect to the safety assessment, studies found that for both full and partial removal the individual risk per annum is less than the Health and Safety Executive's tolerable region of one in 1,000, but full removal would double the potential loss of life factor.

While partial removal scored a better safety rating, the continuing presence of the footings on the seabed creates a long-term snagging risk for fishermen.

All the removal technologies considered in the comparative assessment will be taken forward to the tendering phase. The final decision on which to use, and which contractor, will be made taking the bids into account. The SSCVs could remove the partial jacket in three sections, while HLVs would have to remove it in a larger number of smaller lifts. The Allseas SLV, which is equipped with a frame to which the structure would be attached, could lift most of the partial jacket as a single piece, leaving the last 10 m (33 ft) to be removed in small sections by a construction support vessel. The BTA method could refloat the partial jacket as a single structure.

For the topsides removal, four methods - SSCV, HLV, SLV, and piece-small - are under consideration, and CNRI intends to invite bids from contractors using all these methods. As with the jacket tender, bidders will be asked to nominate the onshore facilities which will take charge of disposal in accordance with the established waste hierarchy - reuse, recycling, and landfill.

From a decommissioning perspective, the arrival of single-lift vessels such asPieter Schelte, a catamaran, is bound to be a good thing, Corcoran adds. Pieter Schelte has the capacity to lift the whole Murchison topsides in one go, and following design modifications, the distance between the vessel's two hulls is sufficient to enable them to be positioned either side of the top of the jacket in preparation for making such a lift.

The drill cuttings pile, which has an estimated volume of 22,545 cu m (796,169 cu ft) and is contained within the base of the jacket, is well below the OSPAR threshold relating to oil loss to the water column and persistence at which remedial action has to be taken. When the various available options were subjected to a comparative assessment, leaving in situ was ranked highest, followed by distribution of the pile on the seabed. Other options included recovering the cuttings to the surface for injection beneath the seabed, or return to shore for sorting and disposal. These options had a low score in terms of technical feasibility, since such operations have never been tried and would be high-cost.