Dual gradient drilling (DGD) is set to turn the page on a problem that has long challenged the deepwater industry. 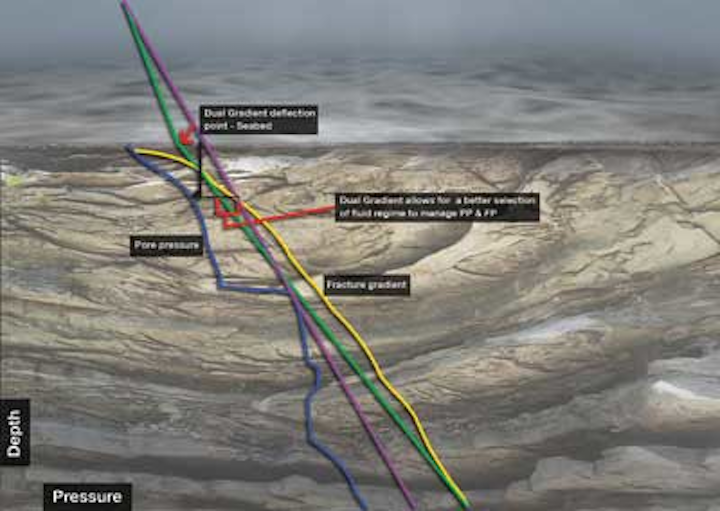 New DGD system undergoes testing prior to deployment in GoM

Dual gradient drilling (DGD) is set to turn the page on a problem that has long challenged the deepwater industry. A new DGD system is being deployed by Chevron and is planned for deployment in the Gulf of Mexico (GoM) later this year. It will eliminate the weight of thousands of feet of mud in the marine riser system bearing down on the wellbore.

A key component in this system is the industry's first commercially available subsea rotating device (SRD), which diverts drilling fluids to establish a dual gradient environment. By diverting mud returns from the well immediately above the BOP, sizing the cuttings, and pumping everything to the surface and a specially configured rig, the DGD system removes a major constraint to drilling at current depths and points the way to deeper waters and more challenging reservoirs.

Mud and cuttings in the riser impose a heavy hydrostatic burden in conditions where navigating narrow drilling windows between pore pressure and fracture gradient is paramount. From the perspective of the well, eliminating the column of mud extending from the seafloor to the sea surface and replacing it with a seawater density fluid effectively places the rig on the seafloor. As a result, water depth becomes inconsequential in its impact on well design.

This ability of DGD to eliminate riser mud from the downhole hydrostatic equation creates a new operational window for mitigating a host of pressure-related safety, environmental, and operational problems that grow ever more troublesome with increasing water depth.

With a much-reduced pressure gradient to consider, deepwater operations are able to manage wellbore pressure and fluid system design to reduce hole instability and enable the setting of deeper casing seats. Fewer problems with wellbore stability reduce non-productive time and improve safety. Deeper seats mean a higher probability of reaching total depth with the designed hole size, and ultimately, a deeper wellbore with a producible hole size. In addition, the return of drilling fluids to the surface is an environmentally friendly alternative to current techniques that reduce hydrostatic pressure by discharging returns directly to the seafloor.

A conventional drilling system has only one pressure gradient that starts at the sea surface and extends to the bottom of the hole, where the full pressure of the entire column of mud is experienced.

The DGD system actively manages two different fluids in the wellbore. One, in the drilling riser, has the density of seawater. The second, from the blowout preventer (BOP) to total depth, has a higher than conventional density. In both conventional and dual gradient drilling, the pressure at the bottom of the wellbore is the same. However, with the DGD fluid configuration, the pressure profile created by the two fluids more closely mirrors what nature has in place: seawater density next to seawater, and higher density drilling fluid adjacent to the sediments. The fluid configuration underlies the project's tagline, "working with nature, not against it."

Note also that this fluid configuration can restore riser margin, something not commonly seen in deepwater drilling operations.

The newly developed DGD system is currently undergoing system integration testing (SIT) prior to deployment in the GoM, and it fits in the seabed-pumping category.

Its development is the latest effort in a long commitment to DGD that began in 1996 and has engaged a wide scope of experts as well as industry consortia. Building on this foundation, the new DGD system itself is the culmination of a major engineering effort involving many experts and companies.

Eighty-seven feet tall, it stands above the lower marine riser package (LMRP) and BOP to form a structure that towers 135 ft (41 m) above the high-pressure wellhead housing on the sea floor. It comprises the seafloor end of the DGD system and integrates several major components including pumps, a solids processing unit (SPU), and the SRD. At the top it is connected to the marine riser; at the bottom to the LMRP.

The SRD diverts annular return fluids before they enter the riser. Its design is a highly modified subsea rotating control device (RCD) typically used in other variants of MPD. In this DGD application, it forms an annular seal between the wellbore and the riser that allows running and rotating the drill pipe while diverting the flow of returns. The other key benefit to this placement of the SRD is that it allows the operator to near-instantly detect and very quickly react to changes in downhole pressure conditions, offering all of the benefits of constant bottomhole pressure MPD operations.

Below the SRD seal are drilling mud and cuttings; above the seal in the riser is a lightweight fluid. It is this isolation of the annular fluid column into two discrete fluid components that eliminates the weight of several thousand feet of drilling mud in the riser that would otherwise put pressure on the wellbore.

The diverted returns enter the SPU, where incoming mud is processed to reduce the size of formation cuttings to no larger than 1.5 in. (3.8 cm), then to the inlet of a company's gas pump, and pumped to the surface via a conduit system that is integrated into the drilling riser. At the surface, a specially modified rig receives the fluid and pumps it through the rig's mud processing system and back down the drill pipe. This highly complex system truly invites a "moon-landing" analogy. It represents a huge undertaking involving the collaboration of hundreds of specialists from several companies and the integration of many technologies.

The collaborative development process for the DGD system reflects a growing need for combined technologies and skills to solve the complex challenges of modern wellbore construction. The discrete application of limited solutions is too often unable to meet multiple challenges presented by extreme conditions, from safety and environmental concerns to costs and practical construction methods.

This dynamic is clearly seen in the development of the Chevron DGD system. Its design and engineering entailed a major collaborative process of over four years that engaged a group of key providers and many other specialists. Engineers from multiple disciplines and companies worked to integrate a complex array of components and clear a diverse set of hurdles, from handling tools on the rig floor to designing a new rig circulating system, and powering subsea operations.

Training was a significant aspect of this collaboration. To efficiently integrate all the components and subsystems into the engineering process, it was important for the design team to be aware of all the equipment involved and how it worked. In this overall educational effort, each provider also established discrete programs to train team members who interfaced with their specific technology.

Within the broad scope of the DGD project, development of the SRD was a narrowly focused task aimed at isolating the two fluid gradients. The SRD objective was similar in some aspects to other MPD operations, although it differed greatly in application.

When Chevron first approached Weatherford in 2009 about developing a SRD, Weatherford was operating an API certified subsea RCD that integrates with the marine riser below the tension ring. The RCD, the first of its kind in deepwater operations, provided the basis for the SRD design that would be integrated with the DGD system.

The Model 7875 RCD is typically used as a proactive deepwater well control barrier that enables a range of capabilities in closed loop drilling systems, including early kick detection, riser gas handling, and the application of constant bottomhole pressure and pressurized mud cap MPD variants. While based on this technology, the SRD design is a significant change from the existing Model 7875 RCD. The major difference is its conversion from a hydraulically operated device to a mechanical system. Changing to a mechanical system simplified integration of the SRD with the whole package of equipment.

The resulting device embodies all the componentry in the standard bearing assembly for Weatherford's marine series of RCDs. But instead of the latch mechanism being in the housing, it was added to the bearing assembly itself. This facilitates simplified operations because the bearing can be set and released mechanically for maintenance and to provide full bore access through the riser.

The solution relies on a common industry mechanism used with wireline safety valves, locks, and other devices. These devices are run into a nipple profile in the tubing string and set mechanically. The SRD adopts this technology in its use of seating keys that are run into a riser joint profile. The bearing assembly lands in the profile and is latched mechanically with set-down pressure. The running tool is part of the drillstring.

The design of the SRD is the result of a long process of evolving RCD technology. The device that began as a simple diversionary device used on land rigs for air drilling has become synonymous with a variety of sophisticated closed-loop drilling and MPD applications across a full range of drilling structures, from land rigs to platforms, jackups and floaters.

The deployment of the new DGD system is the industry's latest effort to resolve a major challenge in deepwater drilling. By dividing the drilling fluid column into two discrete components, the system creates a dual gradient environment that harmonizes the hydrostatic pressure contained in the riser and wellbore with the pressure column existing in nature. With this closer alignment, wellbore hydraulics can be more effectively managed, safety and environmental objectives can be enhanced, and a new subsea world of even deeper prospects can be explored and developed.