Britain's dwindling reserves of offshore gas have been further drained by an unusually prolonged winter. 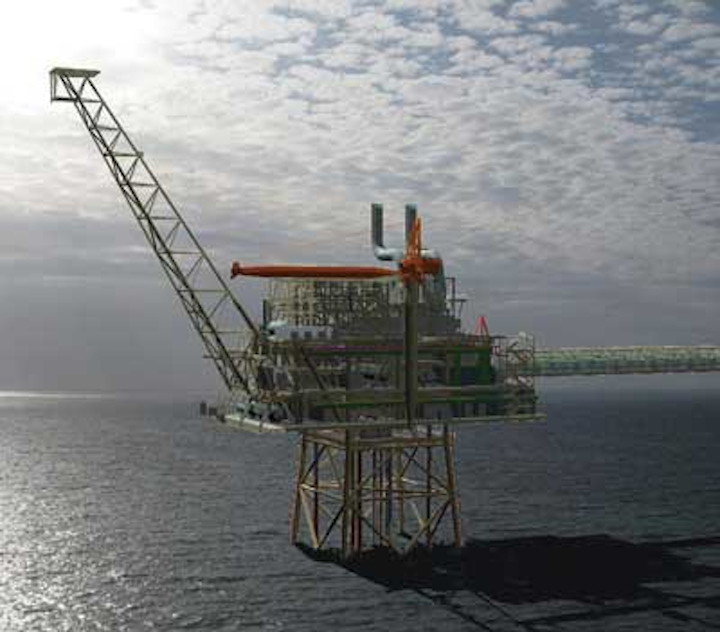 Britain's dwindling reserves of offshore gas have been further drained by an unusually prolonged winter. But BP provided a gleam of light last month with its North Uist gas/condensate discovery west of Shetland.

According to partner Faroe Petroleum this is in a previously unexplored area, although the location is not far from Chevron's undeveloped Rosebank oil and gas field. Chevron expects to take a final decision on Rosebank in late 2013. If it goes ahead, it would be Britain's deepest water field development to date at 1,100 m (3,609 ft). WorleyParsons and INTECSEA have been working on studies for a ship-shaped FPSO to handle producing up to 75,000 b/d of oil and 100 MMcf/d of gas.

Analysts BritBoss report that the processed gas would head through a new 130-km (81-mi) subsea pipeline to Sullom Voe, Shetland, where it would connect directly to the new Shetland Islands Regional Gas Export line to eastern Scotland. Total has commissioned this system to transfer gas that will flow from its Laggan/Tormore fields west of Shetland, due onstream next year.

Rosebank's economics should benefit from the UK government's new allowance for fields in water depths exceeding 1,000 m (3,281 ft). Other new initiatives over the past year include tax breaks on heavy oil field developments, which prompted Statoil and its partners to launch the giant Mariner project in the northern UK North Sea in December, and further assistance for mature field projects. That one lit the fuse for Talisman/Sinopec's Montrose area redevelopment in the central North Sea, involving construction of a new processing/production platform (Montrose BLP) linked to the existing Montrose A platform, and handling output from the Cayley and Shaw fields.

The improved climate for investors on the UK continental shelf has also had a positive impact on exploration drilling. Activity has recovered strongly after last year's slump, although, aside from North Uist, results to date are modest. The potentially highest-impact well throughout the northwest Europe region got under way in March, targeting the ExxonMobil-operated Dunquin prospect in the deepwater Porcupine basin offshore southwest Ireland.

Among the contingent drilling offshore Norway, Wintershall has probably delivered the strongest results, with new finds over the past year in the Skarfjell and Asha Noor prospects. Lundin Petroleum, which achieved breakthrough discoveries on the Utsira High region of the North Sea with Edvard Grieg (ex-Luno) and Avaldsnes (part of Johan Sverdrup), continues to drill the play. Last month the company proved oil in a new accumulation, Luno II. Statoil's recent exploration achievements have been to prove extensions of Johan Sverdrup, and to confirm a new HP/HT gas province in the southern Norwegian North Sea with King Lear, a re-drill of a well that Saga Petroleum had to abandon for technical reasons.

As in the UK, numerous large-scale Norwegian field developments are going forward in the North Sea, such as Total's Martin Linge, Statoil's Gina Krog, and DNO's Ivar Aasen field, with the main construction work split between Far East and Norwegian yards, and Heerema Fabrication Group in the Netherlands.

Later in the decade, construction of the long-distance Polarled gas export pipeline from Statoil's Aasta Hansteen field spar should open prospects for further small to mid-size developments in the Norwegian Sea currently held up by capacity constraints in the region's Åsgard trunkline system. One such project set to go forward is RWE's Zidane, as a tieback to the Heidrun field platform.

Offshore Denmark DONG is pushing ahead with the platform-based Hejre oil and gas field development. The DUC consortium led by Maersk Oil has sanctioned an $800-million extension to the Tyra Southeast production facilities, involving construction of a new platform with horizontal subsea development wells. Further oil development could follow if Wintershall proves that its recent Hibonite oil discovery is commercial.

Early this year, Iceland's National Energy Authority (Orkustofnun) issued the country's first offshore exploration licenses. They went to Faroe Petroleum, Íslenskt Kolvetni (Iceland Petroleum), Petoro Iceland, and Valiant Petroleum. All are in the Dreki area. Additionally, the country is cooperating with the Norwegian authorities on studies to open the Jan Mayen area to exploration.