Stable foaming tendency is often found in oil and gas treatment due to the presence of several substances or dispersing agents, and turbulence from the wellbore to the separation processes. 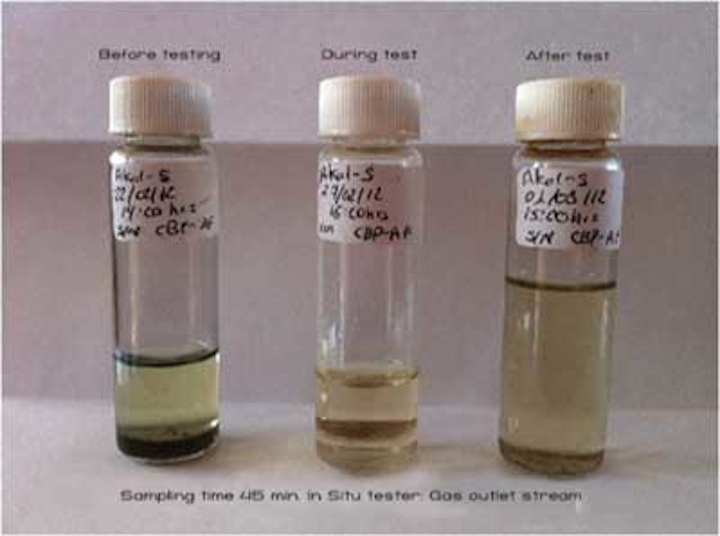 Stable foaming tendency is often found in oil and gas treatment due to the presence of several substances or dispersing agents, and turbulence from the wellbore to the separation processes. The presence of foam can generate unsteady conditions in separators as well as carryover of a great amount of liquid in the gas flow, and amount of dissolved gas in oil that flows out of the separator.

Offshore asset operators traditionally treat foaming problems with chemical additives based on siloxy groups, which break the foam as soon as it is absorbed in the interphase gas/liquid. Silicon used in defoaming additives, however, can affect oil quality for final clients. Silicon can also generate aggregates that tend to precipitate in the process equipment.

For these reasons, Clorobencenos and Pride Oleo have pointed out the need of additives free of silicon and fluor for solving foam in oil, and have developed a series of dual-effect defoamers/antifoamers competitive with those based on silicon that have been used in production facilities offshore Mexico.

The primary offshore separator, the first stage of separation, receives oil and gas from the reservoir. In this stage, most of the dissolved volume of gas is separated. If there is a high foaming tendency, this stage will become the most critical. Generally, retention times for crude oil without foaming problems are in the range of one to three minutes, which guarantees an efficient separation of dissolved gas in oil. Oil with foaming problems requires more retention time, and particular separator designs that may not be available in place. Foam can lead to poor level control, and in severe cases, platform shutdowns.

In second-stage separation vessels, an undesirable consequence of foam is the carryover of oil droplets in gas flowing out the separation vessel. In this case, the gas flow contaminated with liquid interferes with the compression processes and scrubbers downstream. Flooding can cause this equipment to be taken offline in the event of failure. At other times, this gas is flared together with oil – and profits.

Gas carried in liquid can cause pump cavitation and increased compressor demands. Accumulated gas in liquid not only affects separation performance but also generates an increase in gas carryover in pipelines, which impacts the production schedule of offshore assets.

Offshore operators destroy, prevent, or delay foam by using defoamers or antifoamers based on alcohols, glycols, ester, and siloxy groups. Chemical additives with these groups are absorbed on the lamellae (bubbles) to destabilize and break the foam.

Diluted or emulsified silicons and fluorosilicons, the most common products used to treat foam in oilfield separation processes, reduce liquid carry-over in the gas stream and carry-under of gas in the oil stream. If foam-over occurs and silicon based antifoam is used, silicon carry-over can flocculate and precipitate inside oilfield production instruments or equipment.

An application of concentrated defoamer/antifomer additive free of silicon and fluor was approved for a Pemex separator process in the Mexican sector of the Gulf of Mexico. Injection of a concentrated defoamer/antifoamer from the CBP series was done to prove the performance of the chemical additive to destabilize and/or eliminate foaming from a hydrocarbon flow. The aim was to maintain a safe and continuous separation process while complying with quality standards. The application was performed for 72 hr. at a satellite platform and an offshore hydrocarbon processing center operated by Pemex E&P.

Average conditions during the implementation of CBP-AF series additive while maintaining stable conditions in the separation process:

Average conditions during the implementation of the non-silicon-based additive:

The application of the additive defoamer/antifoamer, CBP-Series AF, in offshore facilities was based on the need for a unique and concentrated (undiluted) product free of silicon and fluorine, considering in its composition biodegradable products, acceptable dosage, practical management, and an application that was technically and economically feasible.

The concentrated injection of CBP-AF ended with competitive dosing without the need to use a diluent, facilitating its application and reducing risk to personnel in the area of injection.