Drilling rigs, especially offshore rigs, have been steadily adding automated systems for more than a decade. 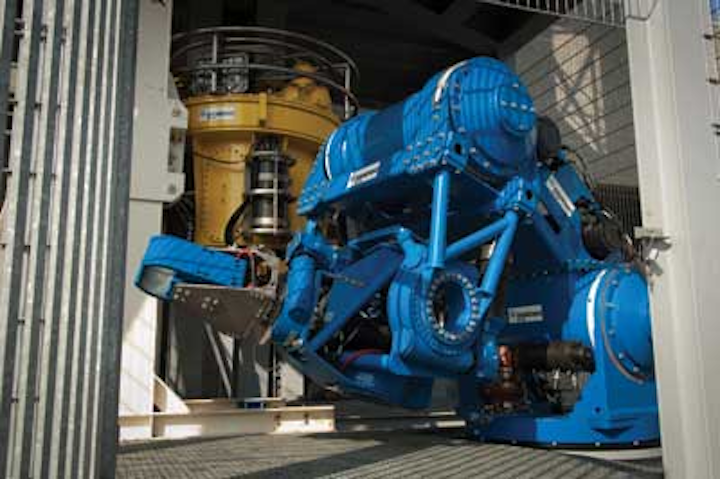 Drilling rigs, especially offshore rigs, have been steadily adding automated systems for more than a decade. One objective of automation is to improve drilling efficiency and safety through the elimination of repetitive tasks performed by rig workers. Although it is obvious that removing personnel from high hazard areas reduces the likelihood that they will suffer an injury, or at the very least could reduce the severity of an injury, safety is a side benefit.

The main benefit of rig automation is consistency. Connections made by an iron roughneck, for example, should have exactly the same make-up torque applied over and over, to ensure that connections made near the end of a 12-hour tower are exactly the same as those made at the start. Machines do not suffer mental letdowns that can affect tired floor hands. Where humans are involved, long periods performing repetitive tasks can have a stultifying effect that can result in inattention, or in the worst case, short cuts that can cause a serious accident. Machines are unaffected by weather extremes, darkness, or slippery decks. They never get tired. Most of all, machines can be programmed to avoid other machines so they work in concert to perform multiple, complex tasks. But in spite of all these wonderful attributes, machines cannot think.

This is the difference between automation and robotics. Whereas automatic machines do a good job on highly repetitive tasks that must be performed precisely every time, robots are able to perform a variety of tasks, each with differing conditions, because the robot has sensors that can measure changing parameters and react accordingly. Robots, by definition, are the closest emulation of a human.

Robotics has been refined to amazing levels in the automotive industry. At a BMW plant, entire assembly lines have been turned over to robotic machines. But wait a minute, you may ask, are not these simply automatic machines? They may appear to perform repetitious tasks, but in fact, they are governed by sophisticated software driven by a network of sensors. That is how they know that the next chassis in line is going to have a certain accessory, or a metric speedometer, or be painted red. Cars can be produced in assembly-line fashion but with hundreds of options, each installed with precision and efficiency by the same group of robots. Not only that, but the robots are capable of performing quality control and assurance tasks, measuring everything from the precision of door locks to the thickness of the paint job in microns, and making corrections when fittings fall out of tolerance. A robot reaches into a bin to pick up a part. It scans the bar code on the part to ensure it has picked up the correct part according to the car's master parts list. If, for some reason, the robot senses the wrong part, it sounds an alarm, and can even stop the line if necessary to correct the error. Twenty-four hours a day, seven days a week, the robots make perfect BMWs, never getting tired, hungry, or cranky.

Can drilling rigs use robotics to improve quality, efficiency, and safety? The answer is emphatically "yes," according to Robotic Drilling Systems of Stavanger, Norway.

The company is developing a multi-tasking, highly flexible robot specifically to perform a variety of drill floor tasks without human intervention. What makes the robot different from typical automated equipment is its software applications system. With a simple graphical object-oriented programming interface, virtually anyone can quickly teach the robot a variety of drill floor tasks and routines. After getting started, the robot "learns" from experience. Its sensors quickly orient the machine with respect to its surroundings and other machines. It seamlessly integrates itself with the driller's console that controls other rig functions so it can avoid collisions with other machinery, other objects (such as racked pipe), and the rig structure itself.

Some of the tasks the robot can be programmed to perform include handling of subs, doping of connections and saver subs, wipers, and drilling equipment. It can operate valves and chokes and standpipe manifolds as well as install, make up, and close Kelly cocks. It can be used while working on the riser tensioning system and for running completions, including installing control lines and clamps.

With a thought toward safety, the robot can perform emergency tasks such as entering a danger zone that might include flames or high-pressure blasts to shut in the well. It can quickly clean up hazardous or caustic material that would ordinarily require a rig worker to take time to don hazmat protective clothing before attempting a clean-up. It can even be taught to install and remove radioactive sources from logging tools, a task usually handled by a specially-trained engineer. During a rig evacuation, the robot could be programmed to perform critical tasks without human presence.

A working prototype drill floor robot has been built. According to the company, it is the largest electric industrial robot ever constructed, with a capacity to hold and carry items up to 6,600 lbm in weight on a 10-ft (3-m) arm. With seven independent axes of motion, the robot can pick up any tool, either autonomously or manually, deliver it, and work on it at either pre-selected positions or anywhere it is needed on the drill floor. It can perform mundane tasks like doping connections or precise tasks like stabbing. Because the robot operates independent of other rig machines, it can perform its tasks simultaneously with normal drilling operations that ordinarily would require momentary suspension so a human could enter the red zone to perform a task.

Training is straightforward. The robot can act as its own simulator for training crew members to get the most benefit from using the machine to maximize efficiency and safety. A 3D interface called the Visualizator is incorporated with the software to show positions and movement of the robot in real time. Incorporating new structures or objects into the Visualizator is accomplished by transferring 3D drawings from most CAD/CAM drawing programs. When used as a simulator, the Visualizator can test new operations or modify existing ones before implementing them. All simulations will have identical operating parameters such as acceleration, retardation, speed, weight, degrees of freedom, and anti-collision, so training is completely realistic.

The robot is all-electric, in keeping with the industry trend to eliminate hydraulic or hydro-mechanical machinery from drilling units. This ensures the ability to perform activities that require very high degrees of accuracy and efficiency, and provides longer periods between failures. All electrical and electronic components are standard off-the-shelf items that are easily available worldwide. Where practical to do so, the robot can even convert kinetic energy from tasks it is performing back to electrical energy to supplement the rig's power grid.

Unlike purpose-built systems such as automatic pipe handlers and iron roughnecks, the robot can learn new tasks. In drilling, it can adapt to handle assembly and tear-down of different bottomhole assemblies including MWD/LWD tools, stabilizers, motors, bits, hole enlargers, and crossover subs. It can assemble and install well test trees and tools. For completions, the robot can learn how to assemble and run complex completion strings, including those that require the deployment of control lines as the completion is run into the hole.