Hydrocarbon production and exploration has ventured into deeper, more hostile environments, and this change has required continual operational change to enable operators to address these challenges. 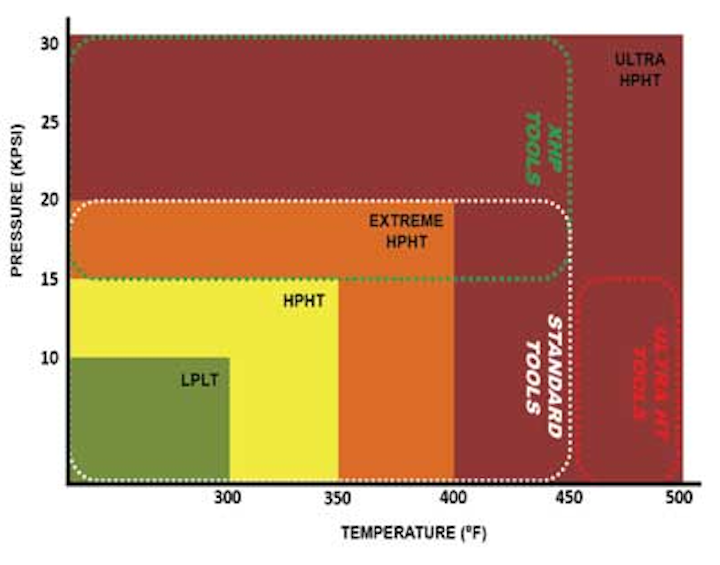 Hydrocarbon production and exploration has ventured into deeper, more hostile environments, and this change has required continual operational change to enable operators to address these challenges. Testing technology has had to redefine the operating envelopes for the requirements presented by more extreme conditions in newer environments. Not only high-pressure and high-temperature tools are needed, but tools that are more debris-tolerant as well.

This paper discusses the application of downhole testing tools in formation evaluation jobs in extremely hostile environments, including ultra-deepwater, extreme high-pressure, extreme high-temperature, and the presence of debris.

Many testing operations have been severely challenged by these scenarios as downhole tools available for standard projects only could function efficiently to approximately 10,000 psi of pressure and 350°F. Now, special tools are available for conditions with temperatures of up to 450°F (232°C) and 30,000 psi of hydrostatic pressure with maximum 15,000 psi of differential pressure. To function in higher pressures and temperatures, the drillstem test (DST) string design should meet its capabilities and scenarios variation should be considered.

The addition of these tools has enabled high-quality well testing to be performed safely, and when the tools are used in wells where solids problems are not anticipated and unexpected debris does occur, they can avoid the unexpected rig time previously required to clean the well. Debris-tolerant tools also have allowed fracturing and acid operations to be performed with a test string; with the same string, the well can be opened to a well-testing operation without compromising the function of the downhole tools. This capability saves time and adds economic value to the job.

The increase of operations in extreme environments has required service companies and operators to change their methods of operation. Because of these changes in equipment and methodology, other difficulties that require support by the equipment have surfaced.

Another important consideration is the high cost associated with offshore exploration, especially in extreme operating environments. Thus, it is extremely important that available tools are capable of operating quickly, reliably, and securely in these environments. Considerable importance has been placed on the development of tools capable of operating in all types of extreme conditions.

Drillstem tests, especially in offshore environments, are performed with mechanical tools operated by annulus pressure. Beyond high pressure and high temperature, these tools will be subjected to the following conditions:

These are the factors to which special attention must be paid during the planning and execution of all the DST operations.

High temperatures also must be considered when selecting electronic components such as batteries. Also, the types of elastomers applied must receive critical consideration.

Another consideration will be the hydrocarbon produced by the well when high pressures are present. In high-pressure cases, heavy fluids are necessary. The presence of small solids used to make the mud heavier creates a risk that the solid particles could affect the mechanics of the downhole tools and prevent them from working properly.

Thus, all reservoir condition details should be considered in an operation. While in most cases the test designers will not encounter all the complicating factors in a single operation, it is always important to consider every factor during the planning phase of every project so that there are no "surprises" during execution. This is especially important in areas where delivery time of products may be crucial to assure that the progress of the project continues according to schedule.

Temperatures up to 300°F (149°C) and 10,000 psi are considered standard environment. Environments are considered as HP/HT when they are 350°F and 15,000 psi. Up to 400°F and 20,000 psi, the environments are considered extreme, and above 400°F or 20,000 psi are known as ultra-HP/HT. Downhole testing tools can be used up to 450°F and 30,000 psi of hydrostatic pressure, with a maximum 15,000 psi of differential pressure, but special attention must be given to data acquisition systems. These systems depend on pressure and temperature ratings, and there are several different system options available.

Other characteristics that increase the level of complexity of an operation are the presence of H2S, CO2 and debris that may be generated by the formation. Also, in the case of H2S and debris, the levels of complexity may be associated with the type of test process used.

Debris can occur from the formation (it may be friable), completion fluid poorly conditioned, drillstring slag, and proppant fracturing. These kinds of debris can settle under the moving parts of testing tools, limiting their operation. Thus, tools developed with the concept of debris tolerance must be applied, and several tools have been designed to operate when debris conditions are anticipated.

Meters with periodic measurement sensors on probes for detection of gas and autonomous breathing equipment kits are available. A system is also available to provide specific training in case an emergency involving H2S occurs.

The presence of CO2 is another challenge that must be anticipated if testing is to be successful. The combination of a particular temperature and pressure range will generate a critical point where the corrosion rate will be increased.

Hydrate formation is considered to be one of the most critical issues that can surface while performing a well test in a deepwater well. In deepwater, there is always a chance of hydrate formation because of the local low temperature at the seabed, the presence of gas, and the possible presence of water. After dissociation, hydrates release high volumes of methane gas. Once formed, hydrates are difficult to remove, and it is necessary to supply approximately twice as much heat to dissociate hydrates as compared to melting common ice.

The first step for preventing gas-hydrate formation is to use a synthetic-based mud for drilling to avoid water production from the invaded mud filtrate during the flow period. The cushion type also plays a very important role in hydrate prevention.

Engineering solutions to address the needs of equipment to perform deepwater DST jobs have targeted improvement of equipment designs to minimize the possibility of damage related to debris in the well and the incorrect selection of tools. These improvements would be required to address all the factors that could negatively impact the testing processes.

Elastomers. Special elastomers are selected to ensure chemical compatibility with the reservoir conditions as well as compatibility with the pressure and temperature conditions to which they will be subjected. It is important to identify the elastomers early in the project so that the delivery time will not impede the timeline for the project. There may be unexpected delays in receiving the elastomers because certain types of elastomers require special requests that must be taken into account the time of manufacture and shipment. In many cases, customs release timing must also be taken into consideration.

Batteries. The choice of battery to be used downhole is also influenced by high temperatures. In the case of temperatures above 400°F, mechanical registers are used for pressure or temperature. The batteries and the electronic components of these devices are quite reliable, and in most projects, a number of registers are used to ensure that sufficient data is registered for all pressure and temperature conditions. Therefore, all downhole data are analyzed to validate the information submitted. There are rarely inconsistencies in the data found using mechanical registers, even in extreme conditions.

Debris. Testing tools have a design that prevents the buildup of debris on drive mechanisms. After an initial test is run, the well may be stimulated with a hydraulic job and proppant to fracture, opened to flow again, and tested a second time to assess the efficiency of the treatment. In situations such as these, tools that maintain integrity in the presence of debris must be used.

Rupture disks. A rupture disk functions as a safety valve as well as a circulating valve. The choice of rupture disk can be influenced by high temperatures and pressures, especially in relation to the pressure that must be used to activate it. Each bursting disk has a tolerance value proportional to its rupture. For example, if a disk has a value of 1,000 psi to burst, it will react to pressures between 980 psi and 1,020 psi. A rupture disk requiring 20,000 psi to burst will burst between 19,600 psi and 20,400 psi, as both have 2% tolerance. For extreme high-pressure situations, such as in ultra-deepwater testing, rupture disks have been created with lower tolerances. By developing rupture disks with lower tolerances, it is possible now to have higher burst values with smaller tolerances so that annulus pressures are not compromised.

Drillstem tests are now being performed in environments that have many complicating factors, and these factors continue to force the development of new tools and systems for bottomhole data acquisition. For these developments to be completed successfully, it is very important that the test data be accurate so that the action plans for future hydrocarbon production can be successful. The new exploration areas require equipment that can maintain integrity in demanding environments.

The planning phase is crucial for operational success. Results from well tests can be instrumental in enabling new, more efficient changes; in cases of mistakes, discussions can initiate operational changes to assure that mistakes are not repeated. The tests can ensure that the most suitable materials, equipment, and solutions are proposed.

The well test or DST should not be overlooked to save rig time expense, because the cost of future losses is almost always much higher. Experience shows that despite the difficulties inherent in operating environments today, it is possible to perform successful testing operations in extreme conditions. Downhole tools have proved to be extremely reliable, and the tools have been modified so that they will maintain integrity in harsh conditions.

Based on a paper presented at the Offshore West Africa Conference, Accra, Ghana, March 19-21, 2013.