Valhall overhaul could extend operations by up to 40 years

BP started oil production from new facilities on the Valhall field off southern Norway on Jan. 26, 2013. 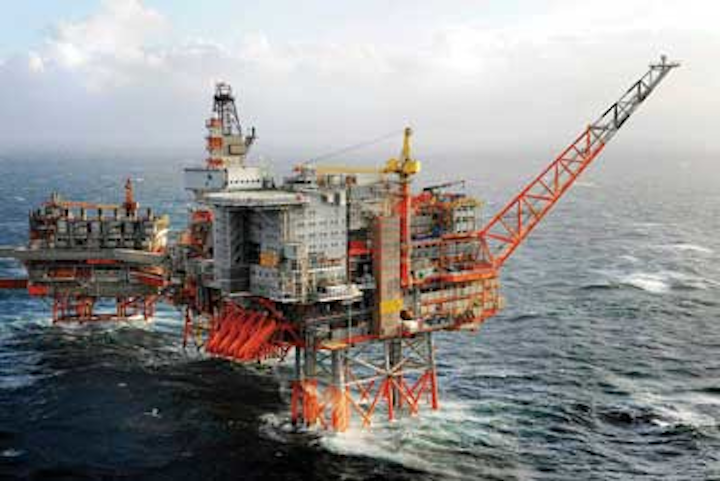 BP started oil production from new facilities on the Valhall field off southern Norway on Jan. 26, 2013. Group CEO Bob Dudley said the redevelopment, estimated to have cost close to $3 billion, was one of the company's most complex field expansion developments to date. It is designed to prolong production from Valhall until 2050, with capacity to handle 120,000 b/d of oil, 200,000 b/d of NGLs, and 143 MMcf/d (4 MMcm/d) of gas.

The centerpiece of the project is a new production, utilities, and accommodation platform (PH) bridge-linked to the main Valhall complex's existing six steel platforms. These and the new installation are now powered 100% from shore via a newly-laid 294-km (182-mi) DC cable from Lista, the first such arrangement on any field offshore Norway.

BP discovered Valhall in 1975, and the original three production facilities began operating in 1982. At the time of sanction, estimated recoverable reserves were 435 MMboe. In the event, nearly 1 Bbbl of oil were produced prior to the start-up of the PH platform, and the company and its partner aim to deliver a similar volume over the remaining field life. Capacity has been boosted in recent years by the addition of two unmanned wellhead platforms north and south of the field center, and a dedicated water injection (IP) platform. Produced oil continues to be exported through a pipeline that runs via the Ekofisk offshore center to Teesside in northeast England. Gas is sent to Emden on the German north coast via the Norpipe trunkline system.

BP's redevelopment plan for Valhall was approved by Norway's parliament in June 2007. Aside from extending field life, the partners' goals in opting for a brand new platform included improved efficiency of production operations and, according to analysts ScanBoss, avoided the need to jack up the existing platforms as the field is subject to subsidence.

Prior to project sanction, BP awarded Wood Group and its US subsidiary Mustang Engineering a front-end engineering design (FEED) contract for the PH platform. Design was performed in accordance with Gulf of Mexico practice, ScanBoss said.

Post-sanction, Heerema Fabrication Group secured the 11,000-ton topsides, the 2,000-ton weather deck module, and the 350-ton flare tower at the group's covered assembly hall in Zwijndrecht, the Netherlands. Aker Verdal in Norway built the 7,500-ton jacket and 12 piles, weighing 4,100 tons. UK fabricator SLP built and then delivered the 3,200-ton, 180-man living quarters, and the 900-ton power-from-shore module in 2010, despite entering receivership the previous year. Saipem's crane bargeS7000 installed the jacket in June 2009 and the deck and topsides modules the following summer, along with the bridge link to Valhall's IP platform.

Fabricom performed FEED for associated modifications to the existing platforms and these were later implemented by maintenance contractor Aker Offshore Partner, which was also responsible for hook-up of the PH. JP Kenny handled FEED for the reconfiguration of pipeline tie-ins between PH and the existing PCP process platform, with Subsea 7 managing the offshore installations.

ABB provided the power-from-shore system for the new converter stations, based on its HVDC Light technology. Nexans engineered the high-voltage power cable, which it also installed during 2009-2010 using the cable-lay vesselSkagerrak. The system was first tested in June 2011, and later used briefly to supply power to the entire Valhall complex following a fire on the PCP platform prior to the start-up of the new platform.

Various design and construction issues combined to delay start-up of the redevelopment by more than two years. As a result, BP had to seek permission to keep the PCP and QP quarters platforms in service, but these will eventually be decommissioned, ScanBoss reported, along with the original DP drilling platform.

One associated scheme was the addition of gas-lift at the north and south flank wellhead platforms. Subsea 7'sSeven Navica installed two 8-in. diameter gas-lift lines to the two installations in 2010, along with a 30-in. caisson at the WP platform in the field center. Next year BP hopes to submit a plan for development of reserves on Valhall's west flank, which could involve drilling 14 new wells, including six water injectors.

The company has further plans to redevelop the nearby Hod field, possibly via a new unmanned wellhead platform with 25 well slots. Production would be sent for processing to the Valhall center via a new 12-km (7.4-mi), 12-in. multi-phase pipeline, with power and control supplied from Valhall through fiber-optic subsea cables.