Production wells are drilled in various areas of the reservoir - initially some may produce oil and gas alone, while others flow water with the hydrocarbons. 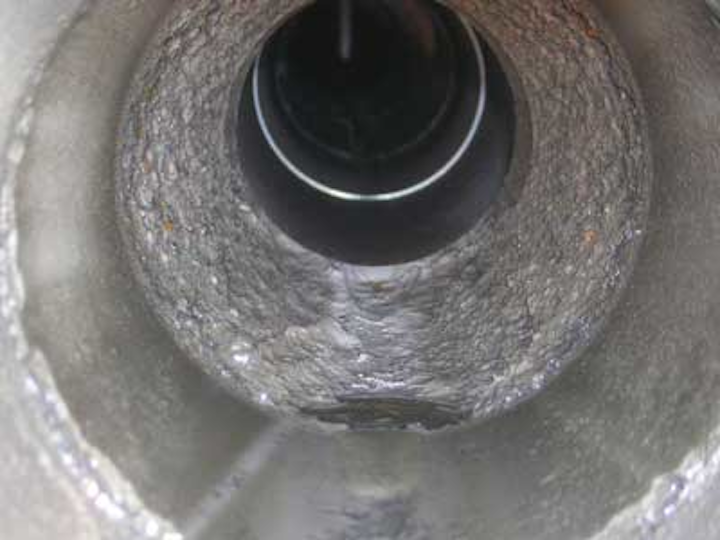 Production wells are drilled in various areas of the reservoir - initially some may produce oil and gas alone, while others flow water with the hydrocarbons. Later in the field's life the well's water content often increases until eventually production is all water. Therefore, it is important that the presence of sand is anticipated and that the installed production facilities can cope with it, as this production stream can be highly erosive due to the entrained sand particles contained within the fluid.

While the sand may represent only a relatively small percentage of the flow, if sand is moving in the piping system at high velocity it can cause significant erosive damage. The velocity of fluid in a pipe may range from 5 m/sec (16 ft/sec) to more than 100 m/sec (328 ft/sec), and as sand particles erode to a power law of the fluid velocity, they can be extremely erosive at high speed.

If particles become entrained within equipment such as a valve, this can cause the operating torque/force to increase significantly or even to seize up. If sand particles build up in a valve cavity, the valve may not close and seal. Particularly vulnerable areas include bends/corners within piping production systems, where sand impinges on surfaces, where there is severe turbulence, or where high local velocities occur. This has significant health, safety, and environmental implications.

One option is to install sand screens downhole so that larger sand particles are retained, but the smaller grains will still get through, provided there is no break-through of a screen. Therefore, as sand cannot be totally eliminated, the only realistic solution is to make the equipment "sand-tolerant." This inevitably increases costs, as different, stronger materials must be used and pipework and walls made thicker.

However, for fields with moderate or high levels of sand, in the long term such an investment will pay dividends because of the equipment's extended lifespan.

Validation is the answer

For equipment and pipework that is susceptible to sand erosion, how can operators be certain of the equipment's performance and integrity? Validation, also known as type testing and qualification testing, is increasingly the answer. Manufacturers are finding that independent evidence drawn from the validation process gives them a competitive edge, as it assures purchasers that the product does perform in a certain way, under arduous conditions, and is therefore more reliable.

However, operators face a dilemma: not only are equipment designs and technologies often evolving in advance of an appropriate standard, but every field they develop will have different attributes. For example, in a field with six wells, each well will have a slightly different production characteristic.

For new equipment for which there is no relevant standard, the first step is to ask what standard is similar or closest to being applicable (if any) and to assess whether it can be used as a basis for a tailor-made test program. This means collaboration between the operator, who understands the specific conditions under which the equipment will operate; the manufacturer, who understands the product's material make up and tolerances; and the test authority, which has experience in developing tests for a variety of equipment and conditions. Consequently, such equipment is often not tested to a specific existing standard; rather, a recognized best practice approach is employed.

The importance of validation testing equipment subject to erosive conditions is becoming increasingly evident as the industry suffers more leak incidents. Following incidents such as theDeepwater Horizon accident, performance of production equipment is under ever deeper scrutiny, particularly if it is in an erosive environment. Rigorous testing, which demonstrates equipment performance, is part of that process.

The oil and gas operator has a responsibility to ensure that flow meter readings are as accurate as possible during production operations for regulatory and fiscal purposes. Erosion may impact flow meter validity, reliability, and integrity; however, through knowing the effects of erosion on flow meter performance, the operator can implement suitable pipeline transportation and maintenance procedures to reduce the risk of downtime.

To evaluate some of the effects of sand erosion on flow meter uncertainty, NEL, supported by the UK National Measurement System, is developing a facility that will be able to simulate fluid flow with sand. Using this facility - and through a combination of experimental investigation and analysis - experimental data and knowledge will be gathered on the characteristics and behavior of erosive flow, and its effects on the responses of common measurement instrumentation.

Any unforeseen downtime caused by erosion to equipment will impact operational performance and productivity, so this facility should make it easier for the industry to fully investigate the effect of erosion, and to implement the correct strategy for dealing with erosion on measurement instrumentation.

NEL's erosion tests have shown that there will be different areas of wear within equipment depending on the geometry and shape of the flow path, the fluid velocity, sand particle size, and the hardness of the sand. Further, gas sand particles and liquid sand particles have different erosive flow patterns, hence different erosion regimes and characteristics. The flow path also influences where erosion occurs in equipment. For example, sudden expansions or contractions, bends, or just downstream from the bend in the pipe where changes in velocity direction often have adverse erosion implications.

To further understand how components and equipment will perform under erosive flow conditions, computational fluid dynamics (CFD) erosion modelling can be applied in the design phase to help anticipate how equipment will perform and enable erosion hot spots to be identified. This technique can assist designers in identifying critical erosion areas and undertaking design changes to minimize erosion levels.

However, CFD erosion modelling is still evolving, so results cannot be relied on in isolation, without physical erosion tests to validate the CFD model. This can be done using erosive flow loops, where controlled amounts of sand particles in the flow stream pass through the equipment or component under test, allowing engineers to accelerate erosion effects. By controlling flow rates, pressure, sand content, and sand size, a wide range of erosive flow conditions can be simulated, erosion levels determined, and calculations performed to predict the erosion lifetime of the equipment or component.

The fact remains that it is difficult to stop erosion. Operators and manufacturers need to learn how to minimize or control the level of erosion through effective product development and use of materials. Importantly, erosion testing in conjunction with CFD erosion modelling can predict product lifetime, enabling a planned maintenance program to be put in place so that equipment can be replaced or refurbished before failure. As unplanned shutdowns are to be avoided, this approach allows operators to plan in advance and anticipate the lifetime costs of the field for better budgetary control.