Under the Energy Policy Act of 2005 (Sec. 999), the DOE's National Energy Technology Laboratory (NETL) is charged with funding and implementing programs aimed at developing the nation's deepwater, unconventional, and mature assets in line with projected energy needs for the 21st century. 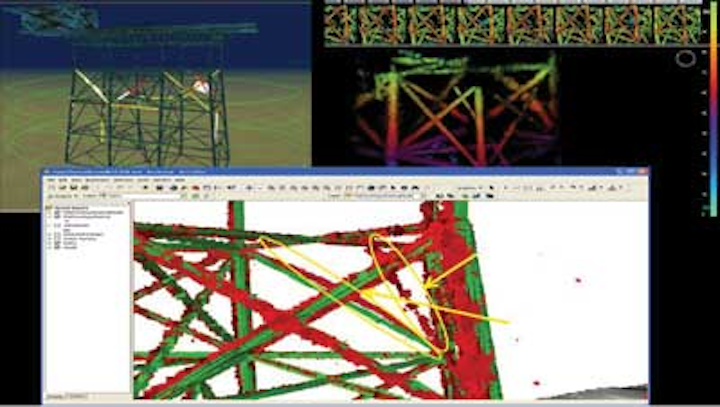 Field trial shows that system can detect anomalies on platforms

Under the Energy Policy Act of 2005 (Sec. 999), the DOE's National Energy Technology Laboratory (NETL) is charged with funding and implementing programs aimed at developing the nation's deepwater, unconventional, and mature assets in line with projected energy needs for the 21st century. The Research Partnership to Secure Energy for America (RPSEA) is a key component of this effort.

Recent events in the Gulf of Mexico have led to even greater emphasis on safe and environmentally benign technologies within the program for deepwater development, leading NETL to impose a safety and environmental sustainability overlay on its ongoing Sec. 999-funded R&D.

The focus here is the results of one such effort, an autonomous underwater vehicle (AUV) designed to inspect deep and ultra-deepwater structures and seafloor anomalies.

A research project directed by Lockheed Martin has developed and is testing an AUV capable of sophisticated equipment inspection and monitoring in deepwater. The research project, with funding from NETL, recently tested the AUV on structures in the Gulf of Mexico.

Management of deepwater fields requires routine general inspection of critical infrastructure. To date, the only means of conducting such inspections has been through the use of remotely operated vehicles (ROVs). Deepwater ROV spreads are big and heavy, requiring large support vessels with dynamic positioning capability and a significant number of personnel at sea. AUV capabilities have been improved to the point that they can now conduct unassisted detailed inspection of subsea facilities. Benefits of autonomous inspection include:

Feedback of the path of the AUV and the detected anomalies is provided to the operator in near real-time. The in situ 3D model of the platform constructed from the current inspection, along with 3D models of the anomalies, are available to the operator upon recovery of the AUV. These models can be exported to a variety of formats to address the needs of individual users. The Offshore Platform Inspection System (OPIS) is composed of three primary subsystems: the Marlin vehicle system, an autonomous perception system, and an autonomous response system.

The integration of the major autonomy components is achieved via well-defined interfaces. These allow for the independent development of key autonomy technologies as well as the rapid insertion of plug-and-play capabilities. These interfaces follow the ASTM F25411 draft autonomy standard where applicable. This standard defines a messaging interface in terms of message content without regard to transmission protocols or mechanisms. Initial testing and development of the integrated system was performed in a simulation laboratory which provides vehicle dynamics, 3D imaging sonar data, and inertial navigation data. This lab testing addressed many integration issues early in the integration process, thereby reducing the need for expensive sea trials.

The Marlin AUV is a mature Lockheed Martin product which has been used on multiple missions. The system consists of the AUV; an operations and maintenance (O&M) van; a launch and recovery system; and a shipboard cradle assembly.

The O&M van, launch and recovery crane, and the shipboard cradle assembly is each configured with standard 20-in. ISO fittings, which simplifies shipping and shipboard mounting. Mobilization is straightforward, and the entire system can be installed in three lifts. This simple and efficient configuration is operated and maintained by three people: a vehicle operator, a crane operator, and a deck hand. Marlin's patented autonomous underwater homing capture and lift provides a robust and simple approach to vehicle recovery, unlike the sometimes risky and weather-dependent surface recovery methods. The small footprint of the AUV system also allows for deployment on a smaller, less expensive vessel when compared to a standard ROV spread.

The perception system is responsible for processing the 3D imaging sonar data to generate 3D models of the offshore oil and gas platform. During structural surveys, the sonar is compared to a prior model of the platform to detect changes. Because of the uncertainty in the vehicle pose (and hence the sensor pose) provided by the navigation unit, the sonar data must first be properly aligned to the prior model before it is assembled into a changed model. This alignment is performed using a random sample consensus (RANSAC) over the sonar points to find the pose adjustment that aligns the largest number of sonar points to the model. The prior models are built using this same alignment approach, but incoming sonar data is aligned to the model built so far from the earlier data. This process is typically guided by a human operator to insure the quality of the resulting model.

Autonomous response is responsible for guiding the vehicle safely through the inspection mission. The response system provides mission planning, high-level guidance and contingency detection, assessment, and response capabilities for the AUV. Mission planning is separated into two phases.

First, a high-level planner narrows the user-defined search area to a tractable planning space while ensuring each section of the platform is visible to the sonar. Then, a detailed planner generates an optimized trajectory for the vehicle which ensures maximum sonar frustum coverage while maintaining a desired distance from the platform. (In 3D computer graphics, the frustum is the region of space in the modeled world that may appear on the screen.)

Even with effective planning and guidance, unexpected events can occur. The contingency detection system identifies these events. This module is decoupled from the guidance and navigation software, and allows for leveraging tested and proven software components from existing systems. The contingency detection, assessment, and response system is based on the Lockheed Martin Mission Effectiveness and Safety Assessment (MENSA) system. A separate contingency assessment and response system provides the ability to implement multi-tiered responses to detected contingencies.

Integration of the three primary OPIS components - vehicle, autonomous response system, and autonomous perception system - was initially evaluated in the simulation laboratory. Performance of the autonomy algorithms was validated on tactical hardware in a low-risk, reduced-cost environment that allowed for robust verification and testing of the system before offshore trials. This allowed the team to proceed offshore with increased confidence that the system would perform as designed, with a reduced risk of losing or damaging the vehicle or structures being inspected.

Through these exercises, the team verified the system's ability to build a model of a platform and detect anomalies in an operational environment. This combination of technologies is an improvement over current state-of-the-art offshore inspection capabilities.

This project is representative of the R&D work being undertaken via the Section 999 Program to ensure safe and efficient development of the nation's deepwater and ultra-deepwater assets. Altogether, NETL has over 30 active deepwater and ultra-deepwater projects in various stages of progress, with another 17 to be added from the 2012 program. Proposals for research under the 2011 Ultra-Deepwater Program are in negotiations following awards. Requests for proposals (RFPs) for the 2012 Ultra-Deepwater Program have been posted on RPSEA's website atwww.rpsea.org. Current information for the 2012 RFP solicitation can be accessed on the Current Request for Proposals page under the "Business with RPSEA" menu button. Proposals for Round 1 of the 2012 Ultra-Deepwater Program R&D projects are due on Sept. 25, 2013.