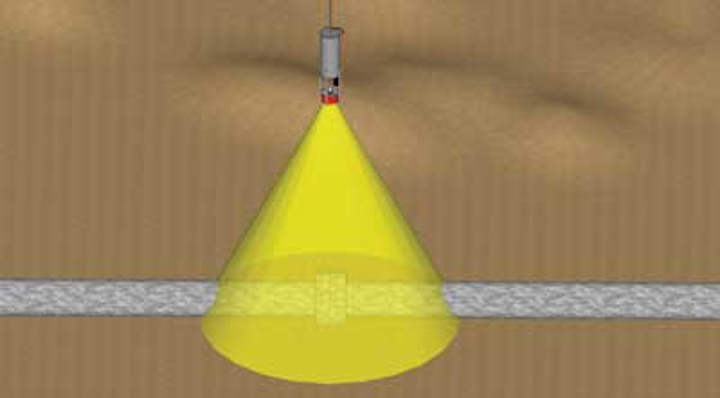 Leaks in pipelines are generally caused by the transition of the transported fluid from the internal pressure to the lower external pressure. The resulting turbulence and sudden expansion of the fluid mass generate acoustic (ultrasound) signals. The ALD system extracts these signals from the ambient noise, even when they are very weak. Due to this sensitivity, the system has located leaks down to 0.2 liter/min on an offshore installation.

The system's main components are an underwater acoustic sensor, which acquires data along the pipeline; a transmission line that relays the data to the surface vessel; a hardware receiver; and PC-based software that evaluates the acquired signal in real time and its development along the pipeline track.

Depending on the application, the ambient conditions, and the means available on site, the inspection equipment may be hand-held by divers to check flanges, deployed in a towfish version, ROV-installed, or lowered vertically over the side of the surface control/support vessel.

This year Co.L.Mar has used the technology intensively for leak inspections offshore West Africa. According to managing director Luigi Barbagelata, one assignment involved a pipeline with numerous flanges.

"Using our equipment, the divers were able to detect which flange was leaking," he said. "Following tightening of the flange bolts, they reapplied the ALD and verified that a smaller flow was still present, which meant that further tightening was needed. They could also identify which flange sector was leaking and which bolts had to be tightened. Without our equipment they would have probably assumed that the first repair was fine and the leak controlled, but the resultant hydrotest would have revealed that this was not the case."

In May, Co.L.Mar used the ALD in vertical mode installed for the first time with multi-beam sonar and an underwater camera. These items were used to verify the positioning of the sensor against the pipeline, the as-laid chart for which was not accurate. Another project was a leak inspection on a pipeline offshore Japan operated by a major oil company. Scope of the four-day inspection was to verify the integrity of the pipeline.

This spring, the company completed the first ALD prototype for installation on an autonomous underwater vehicle (AUV), with successful trials in a test pool and at sea. The system can be adapted to different kinds of AUVs to be used for inspecting and checking the integrity of pipelines. "The advantage of using an AUV for inspecting pipelines is significant, if the vehicle is equipped with a navigation system for automatically tracking and following the pipeline. In that case there is no need for an acoustic beacon for navigation of the AUV," Barbagelata said.

The checking capability is applicable to "resident" AUVs, which are deployed to permanently monitor the conditions of a subsea installation, periodically returning to a subsea base to recharge batteries and download data.

"The ALD version we have developed at the moment is recording inspection data, but that needs to be played back to check if there is a leak," he said. "We are now working on software that processes the data automatically and in real time, and decides autonomously if there is a leak. Once this is determined, the ALD can interface with the AUV's navigation system, modifying the mission in case of leak detection. We hope to have this solution ready within six months."

Another ongoing Co.L.Mar development is a monitoring system for detecting leaks on subsea structures such as christmas trees and manifolds. The company has completed work on an omnidirectional prototype following extensive tests in an indoor tank. Sea trials are scheduled before the end of the year, simulating different leaks and pressures. Assuming these are successful, the next step will be to test the equipment on a real subsea installation. Additionally, the company is working on a more sophisticated directive sensor.