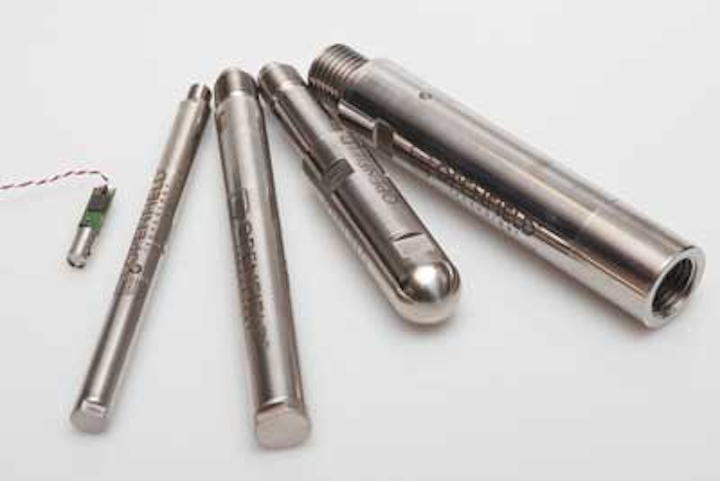 OpenField Technology has developed a series of miniaturized downhole measuring devices incorporating high-performance sensors. Since the company was formed two and half years ago, its focus has been mainly on pressure and temperature sensors. However, according to Emmanuel Tavernier, R&D manager, there is potential to widen applications for its MEMS (micro-electric mechanical systems) technology further.

In the case of downhole measuring tools, smaller is better, Tavernier says. The MEMS chip at the heart of OpenField's products measures only 2 x 2 x 2 mm. The MEMS chip is combined with miniaturized electronics and housing in an optimized patented design, which the company claims leads to downhole sensors of unprecedented dimensions. Among four products that OpenField launched at OTC 2013 was a ½-in. diameter, 6.4-in. long pressure and temperature recorder.

Both the chip and the electronics are designed for low power consumption, which means the lithium battery that powers the device can be significantly smaller than the one used in an equivalent quartz product, while still keeping the tool functioning for up to three months downhole.

The sensors' small size makes them more resistant to shock than larger products. This is a significant benefit, Tavernier points out, in operations such as perforation, where the tools are exposed to considerable jarring. It also enables them to access places that larger products cannot, for example being incorporated in the drill bit for performing measurement-while-drilling functions.

Due to the low temperature inertia, as well as the small size, the OpenField device stabilizes much faster when surrounding conditions change or it is moved to a new location. A quartz sensor, because it has several resonating elements, takes significantly longer, OpenField says.

Miniaturization does not adversely affect function, Tavernier emphasizes. For example, the accuracy of pressure measurement is 0.01% of full scale, while resolution is 0.00005% of full scale, comparable to the best standards available in alternative products. Moreover, the OpenField sensors can be set to take frequent measurements – over 100 data points per second – without compromising accuracy.

The sensors can also be set to come into operation only when specific parameters are reached, for example, when pressure or temperature passes a certain threshold. Time-lapse operations can also be programmed.

A recent field test by drilling contractor Archer in Norway showed that, in comparison with a piezo reference gauge, two of the company's recorders provided better resolution and much shorter stabilization times. Omega Well in the UK is currently performing field tests of OpenField products, while another client is testing them in a perforation application. Other clients which have conducted field-testing include Pemex in Mexico and Algar Oil in Libya.