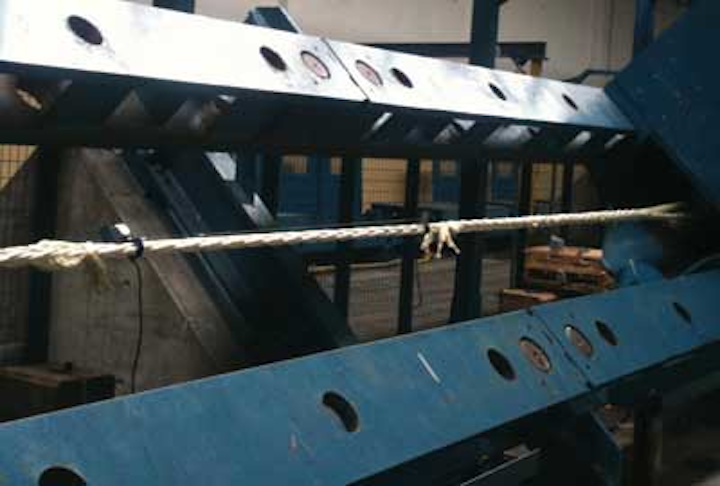 A new High Modulus Polyethylene fiber (HMPE) with improved creep properties allows its use in permanent offshore mooring systems. Testing shows that ropes made with the new fiber type retain the properties characteristic of HMPE such as high static strength and stiffness and yarn-on-yarn abrasion resistance.

HMPE is suitable for longer, ultra-deepwater mooring lines beyond 2,000 m (6,562 ft). The fibers are characterized by high strength and high modulus, producing lighter and smaller diameter high-stiffness ropes compared with polyester mooring lines for the same MBL (minimum breaking load). However HMPE's creep performance has prevented its use in long-term deepwater moorings. Systematic improvements in creep performance have led first to the development of SK78 fiber for semi-permanent MODU moorings, and now DM20 fiber for offshore permanent production moorings.

The long-term creep properties of DM20 match industry requirements for duration of permanent moorings. A creep estimation model based on fiber data has been developed for DM20 to demonstrate the fiber's ability to meet creep performance requirements, and thus limit the need for full size rope testing.

The fiber creep rate properties were confirmed by creep tests on subropes. Because of its extreme low creep elongations, the discard criterion of 10% permanent elongation – suggested in industry guidelines and standards for general HMPE types and MODU grade SK78 – needs to be reconsidered for DM20. Dynamic stiffness of DM20 equals SK78, while secant stiffness of DM20 is higher than SK78, confirming the reduced creep of this new fiber. It is advised to determine stiffness values on (sub)rope level.

Beyond 2,000 m (6,562 ft) water depth, high stretch of polyester rope becomes a problem as the longer mooring lines allow greater horizontal offsets. A 2,000 m polyester line may have 40 m (131 ft) elongation, while a 3,000 m (9,842 ft) line would allow 60 m (197 ft) elongation under the same environmental conditions. This creates horizontal offsets which may exceed the limits of risers. Using HMPE with similar break load, these offsets would be only 12 m (40 ft) for a 3,000 m line.

In addition, HMPE is now considered suitable for these longer deepwater mooring line lengths. Because the fibers are characterized by high strength and high modulus, resulting in lighter and smaller diameter high-stiffness ropes, there are both technical and operational advantages over traditional polyester mooring lines. HMPE ropes typically have an extension at break of 2%-2.5% for a worked rope.

However, the high stiffness of HMPE also can be a limiting factor. In high storm and hurricane risk areas the mooring system needs stretch to survive. Hybrid mooring lines combining HMPE rope segments with polyester rope segments provide the stiffness needed to handle maximum loads during station-keeping in storm, while ensuring sufficient elasticity to damp peak loads induced by waves.

Pretension is responsible for long-term loading of mooring lines. HMPE fibers are sensitive to long-term static loads, and irreversibly elongate proportionally with time. This is known as creep. All synthetic ropes experience some creep – defined as the permanent elongation of the rope under load. The rope will not fully recover once the load is removed.

For creep analyses, the long-term environmental events can be represented by a number of discrete design conditions from which the annual creep elongation is calculated, and a predicted total creep strain for the design service life determined. During prototype evaluation, a test is performed to either verify or calibrate long-term rope creep rates with data from the fiber creep model.

Monitoring the elongation of HMPE rope is used to measure the extent of creep. However, there is a lack of consensus among standards bodies on test methodologies. Some mooring standards require creep monitoring of the rope in use in the most critical section, usually the top part or top section closest to the water surface because of the higher temperatures. A few standards specify a HMPE rope replacement criterion of 10% creep strain of the total length of the HMPE rope.

Where indicated, the creep safety factor for HMPE ropes is different for mobile moorings and long-term moorings. It also differs on how it is applied. In the norms and guidelines for HMPE ropes, the safety factors are based on either creep failure, creep rupture life, or design service life, which, by definition, are not consistent. Furthermore, the factor of safety for a monitored rope can be lower than that for an unmonitored mooring rope. There are also practical issues to be considered when a creep model is based on rope data. For extrapolation over longer times, creep tests on HMPE ropes should be carried out into the "steady-state creep regime," to determine the plateau in the creep rate. Since creep rate is load and temperature dependent, testing until creep failure within an acceptable time frame can only be performed at high loads or high temperatures which do not represent offshore operating conditions. The cost of rope test facilities to perform these tests at operating loads and temperatures can be high. As a result, rope creep tests are normally limited to rope creep rate tests to verify the fiber creep model used for the analysis.

As required by several of the industry norms and guidelines, the DM20 rope creep rates were compared with creep model predictions to verify the fiber creep model.

The creep model predictions are very close for normal loading ranges, and conservative for load ranges which are significantly over normal operating conditions for the offshore mooring lines. In all tested conditions, the rope showed a creep rate lower than estimated. Although the relative differences between predicted and measured creep rates seem high, a certain inaccuracy is inevitable in predictions of long-term endurance. DSM Dyneema has ensured that model estimates of creep rate always err on the conservative side of the expected creep lifetime.

It should also be noted that the accuracy of the current creep model, based on limited creep rate and creep rupture data, will improve over time.

To verify the offsets under heavy load conditions, the creep of fibers has to be taken into account. Equivalent secant stiffness, incorporating creep of the most tensioned and most slack lines for storm durations of 24 to 72 hours, are relevant to a mooring analysis and show how yarn results can be used to produce estimates of rope properties. Dynamic yarn stiffness testing involves preliminary cycling followed by the actual stiffness cycling measurement. From this, yarn creep is estimated based on changes in elongation at pre-defined steps for periods up to 72 hours.

HMPE is visco-elastic and its stiffness characteristics vary with load intensity and duration, and number of cycles. During early loading cycles, the bedding-in of the rope results in some initial elongation. The equivalent secant stiffness and dynamic stiffness of DM20 in a rope construction was measured on the 52 mm diameter Gama98 rope construction subrope produced by Lankhorst Ropes, and compared with data derived on a full size MODU rope made from SK78

Although tested at same temperatures, the equivalent secant stiffness values of the yarn, experiments based on the yarn break load are lower than the values derived from the rope experiment. When stiffness data is to be determined on a yarn, the test load should be comparable to the application load on the rope. This means that to compare fiber and rope stiffness data on a relative load basis, the fiber/rope break strength conversion factor, or realization factor, must be taken into account.

In summary, the fiber and rope stiffness measurements have illustrated that:

The American Bureau of Shipping specifies that HMPE fiber should pass the minimum requirement of the yarn-on-yarn abrasion test, according to CI-1503 (19). At the Tension Technology Internal test lab (Arbroath, UK), the DM20 fiber was tested at 1%-5% BL and compared to SK75 fiber test results from 2009. It was determined that DM20 will pass the minimum requirements and no significant difference was detected between DM20 and SK75 fiber and indicated that a comparable tension fatigue can be expected.

In addition to additional creep characterization of the DM20 fiber for more accurate creep model predictions, laboratory testing in a wide variety of fiber and rope tests including fatigue testing will continue to reinforce confidence on the suitability of this new HMPE fiber type for the intended markets.