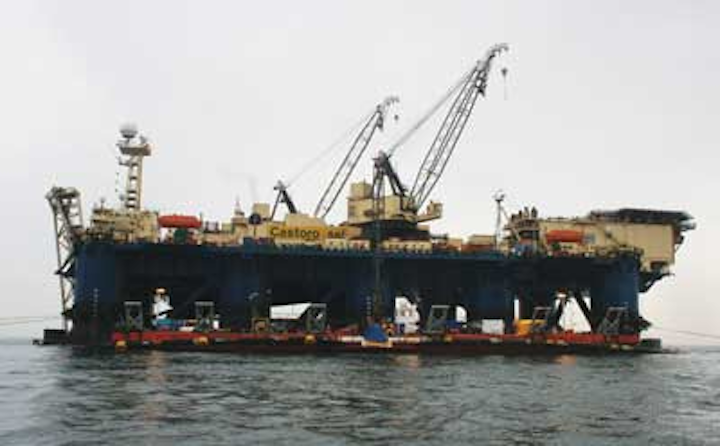 On April 18, Saipem's laybargeCastoro Sei completed the final section of the second Nord Stream gas pipeline through the Baltic Sea. Less than six months later, the line was onstream and the integrated twin pipeline system was fully operational, bringing to a close the 30-month offshore construction and commissioning program.

Nord Stream's parallel 48-in., 1,224-km (759-mi) subsea pipelines are the world's longest, transporting gas southeastwards through the exclusive economic zones of Russia, Finland, Sweden, Denmark and Germany, and the territorial waters of Russia, Denmark and Germany. One of the main sources is the 600-bcm (21.2-tcf) Yuzhno-Russkoye gas/condensate field in the Yamal-Nenets region of western Siberia.

Both pipelines deliver gas to the reception terminal in Lubmin, northern Germany, with onward delivery through new overland lines in Germany that are connected to the European gas transmission system. When the system eventually operates at full capacity, combined throughput will be around 55 bcm/yr (1,942 bcf/yr).

As with Nord Stream Line 1, Line 2 was built in three sections, with the pressure highest at the start in Russia (220 bar, or 3,191 psi) and lowest on arrival at the German mainland (100 bar/1,450 psi). As the pressure reduces, so too does the wall thickness of the pipes, saving steel costs and allowing faster pipelay.

Three vessels handled construction of Line 2. Saipem's shallow-water laybargeCastoro Dieci installed the nearshore sections of both lines at the Russian and German ends during summer 2010. Allseas' Solitaire started its section of Line 2 in Russian waters in May 2011, around 7.5 km (4.7 mi) from the landfall at Portovaya Bay, and worked through the summer to lay the majority of the route's 375-km (233-mi) Finnish section.

Castoro Sei, which would be responsible for 70% of Line 2, began its campaign in Finnish waters in June 2011 at the 350-km (217-mi) point west of Hanko, continuing on a southwesterly course through the Swedish exclusive economic zone. The vessel worked through the winter, eventually welding and lowering to the seabed the final pipe (number 99,953) in German waters this April.

Around the same time, valves at both the Russian and German landfalls were shut, and the flow of gas from the Portovaya compressor station through Line 1 was suspended, for a two-week period. This was a planned program to adapt, test, and certify the control systems in order to integrate the parallel pipelines into a single automated twin-pipeline gas transport system.

Pre-commissioning of Line 2 involved flooding all three sections with seawater, followed by cleaning, gauging and pressure testing. Hyperbaric tie-ins were then performed underwater to connect the two offshore locations where the design pressure changes from 220 to 200 bar (3,191-2,900 psi) and from 200 to 177.5 bar (2,900-2,574 psi). The connection of the central and southwestern sections was implemented in June off the Swedish island of Gotland in a water depth of 110 m (361 ft).

Welding operations were set up by divers and operated remotely from Technip's 160-m (525-ft) long dive support vesselSkandi Arctic, using equipment from the Pipeline Repair System pool of pipeline operators administered by Statoil. Three large pipe handling frames were lowered from the Skandi Arctic and positioned over the pipeline ends on the seafloor. Both the frames and the welding habitat had to be enlarged, as 48-in. diameter pipelines had not been handled this way before.

The frames moved the ends of the overlapping pipe segments to align them for welding, after they had been cut to the required length. The ends were then beveled, and the pipes lifted and moved into place. Remotely controlled welding took around 24 hrs – the weld was then inspected using ultrasound and, following acceptance, the welding spread was retrieved to the vessel, with the pipe handling frames lowering the pipeline onto the seabed.

After both tie-ins had been completed, all water was removed from Line 2 followed by drying of the pipeline. Onshore and offshore sections were connected in August, and following further testing, the line came onstream on Oct. 8.

During the twin system's early years in operation, inspections will be performed annually, with some sections of the lines inspected more than others due to the results of risk analyses and legal requirements. Line 1 was inspected this summer, with an ROV launched from theSkandi Olympia using underwater cameras to check its exterior condition, and an electromagnetic pipe tracking system deployed to determine the position and depth of the pipeline in areas where it has been trenched or become naturally embedded into the seabed. In future, intelligent pigs will be sent through both lines to check for internal signs of corrosion or buckling.

The Nord Stream AG consortium of Gazprom, E.ON Ruhrgas, Gasunie, GDF Suez, and Wintershall are already considering options for expanding gas exports to Europe. A feasibility study has identified three options for new lines through different parts of the Baltic Sea and Gulf of Finland, taking in Estonian and Latvian waters, and there is talk of extending the supply route to the North Sea for UK customers.