The Downhole Technology testing center and training school at Bridge of Don, Aberdeen has installed a submersible electric mixer from ITT Flygt of Solna, Sweden. 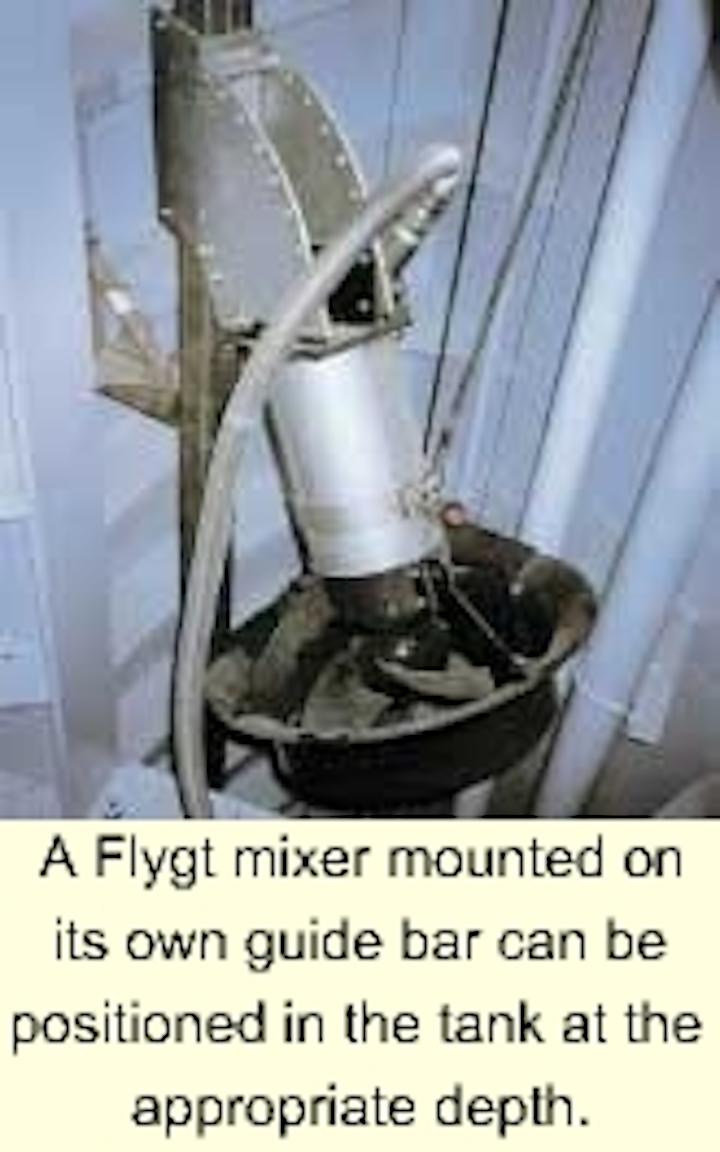 The Downhole Technology testing center and training school at Bridge of Don, Aberdeen has installed a submersible electric mixer from ITT Flygt of Solna, Sweden. The mixer has been fitted in one of the center's mud tanks to keep the components of the drilling mud in suspension and to prevent it settling on the floor of the tank - especially in the corners. The result has been a more complete mixing of the mud, more efficient use of power and lower tank cleaning costs.

Downhole Technology owns and operates Europe's biggest land rig with five tanks for the storage of drilling mud needed for oil and gas well boring. The facility is used for product testing and for training industry personnel and the use of the ITT Flygt mixer was considered appropriate as a means of maintaining the quality of the center's drilling mud. Because the mixers are submersible they provide an almost limitless choice in where they can be positioned and are said to offer optimum mixing results for all oil industry users, including drilling contractors, supply vessel operators, mud manufacturers and deep sea drilling operators.

Commenting on the installation, Andy Gaunt, Flygt's Product Manager for Mixers, said a 13-kW mixer made from stainless steel and fitted with a jet ring to increase mixing efficiency and reduce power consumption was supplied. The unit was mounted on a stainless steel guide bar system at a 20 degree angle in the corner of the rectangular tank measuring 3 meters by 5.5 meters by 3 meters, with a 195 bbl capacity.

"The tank was previously mixed by a non-submersible paddle mixer which did not mix efficiently. It allowed the mud to settle in the corners, and since the mixer blades were located 1 meter from the floor of the tank, they made it necessary for the tank to contain at least that depth of mud before they could take effect.

"More efficient use of power has been achieved compared with the previous long-shafted paddle mixers which used motors of a similar wattage. Maintenance has also been simplified since the submersible mixer can easily be hoisted up along the guide bar."

Harry Simpson of Downhole Technology added "Fresh drilling mud is expensive to buy and used mud is expensive to dispose of. The Flygt submersible mixer is enabling us to maintain the consistency using less power while the mud is in the tank and it is preventing it settling on the bottom and in the corners. As a result the mixer is allowing us to make better use of our drilling mud and to reduce the cost of cleaning out the tank when the time comes for disposal."

The high viscosity and gel properties of modern drilling muds increase the importance of ensuring that sedimentation is not allowed to occur in the tank. This requires the mud to be kept in motion continuously, but the irregular shape of many tanks can make this difficult and they may contain areas where circulation is restricted. Any part of a tank that is occupied by settled mud can be quantified in financial terms as it represents lost mud and storage volume and a correspondingly higher cost of mud.

The ITT Flygt mixer range extends from 1.9 kW to 30 kW, and because they can be located virtually anywhere inside a tank, their energy is not dissipated against tank floors, baffles or facing walls. The flow can be steered so that it follows the shape of the tank. The mixers' efficiency is claimed to be partly due to their robust construction and high performance and also to the investment that ITT Flygt has made in defining the fluid dynamics of submersible mixing. With the help of PC-based sizing programs and a network of regional test laboratories, Flygt project engineers are able to work closely with customers to configure a mixing system that prevents sedimentation in any tank of any shape or size.

The company also makes a range of heavy duty pumps in a wide variety of materials to meet various corrosion, abrasion and temperature requirements. They are available in a range of models from portable 0.4 kW units delivering 150 l/min to 450 kW machines with capacities up to 300,000 l/min.

Submersible agitators have been in operation in mud storage tanks since the mid-1980s. One of ITT Flygt's versions is the free flow compact agitator, which provides a high velocity jet of liquid within a tank.

Compact agitators can often mix an entire tank volume, regardless of the tank's shape, as they can be placed virtually anywhere in the tank, and aimed in different directions, ensuring the optimum flow. When deciding what size of agitator is needed, two main liquid characteristics must be taken into account - yield stress and mud density. The influence of viscosity can often be inferred from the yield stress value.

With Newtonian liquids such as water, the internal friction is directly proportional to the shearing rate between liquid layers. However, with more complex liquids such as drilling muds, the suspended solids interfere with one another, resulting in increased internal friction. This in turn causes yield stress which must be overcome before a liquid can begin to move. Inadequate mixing capacity in a yield stress liquid will result in completely dead zones where no mixing will occur - therefore an agitator must be chosen which can move the entire volume.

The Flygt agitators, which can be placed anywhere in a tank to direct the flow in virtually any direction, can thereby move more drilling mud than an equivalent sized non-submersible mixer. Installation and service is also easier, the company claims, as in most cases the agitators are simply lowered and raise don a guide bar.