The benefits offered by standardized living quarters are a leading issue on numerous upcoming developments that call for a series of identical units. 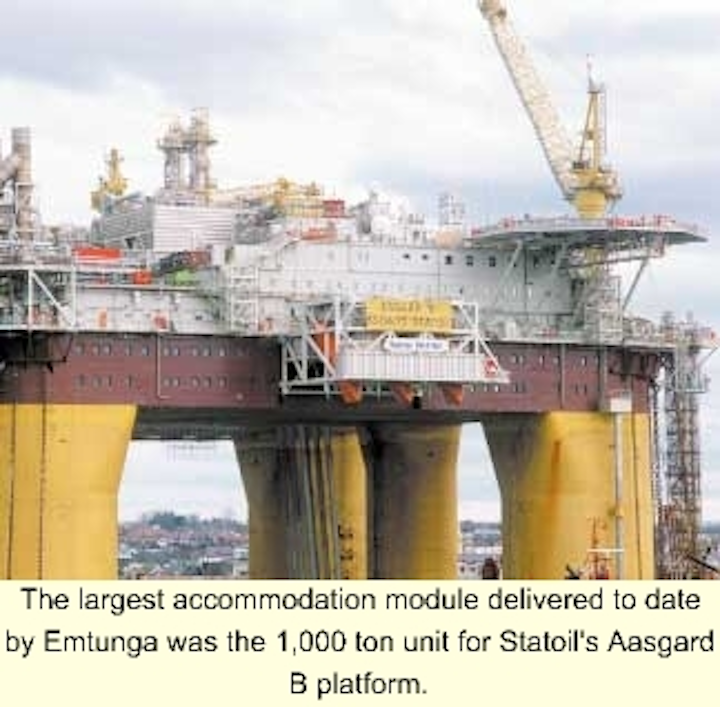 The benefits offered by standardized living quarters are a leading issue on numerous upcoming developments that call for a series of identical units. For Emtunga, which has proven standardized solutions, the attraction is a rolling series of orders.

Accommodation modules for the offshore sector have already become standardized to a large degree, according to Marketing Manager Klas Wallin. "Oil companies accept standard solutions more and more. They've realized that re-inventing the wheel costs a lot of money," he says. A significant cost-saving can result from standardization - the proportion of the overall cost of a module which the design work accounts for is approximately 20% for a fully engineered unit and only 10% for a standardized unit. "Emtunga, as an experienced supplier of living quarters," he adds, "has the knowledge to design the most cost-effective and weight-effective quarters, choosing the best materials necessary to provide a quarters with the lowest life cycle cost."

Emtunga is now preparing to bid for the first unit to be tendered for the Chirag full field development in the Azerbaijan sector of the Caspian Sea. The development will call for at least another two accommodation units, so the winner of the first one could be advantageously placed when the others come onto the market. Bids are due to be submitted to the main contractor, Halliburton, in late March and an award is expected later in the summer. The unit, which will weigh around 1,400 tons and contain 110-130 beds, will be due for delivery to a Caspian yard in late 2002. Emtunga has already had some involvement in Chirag, having supplied the accommodation unit for a previous development stage.

The company is also prequalifying for the Kizomba development off Angola. Here the operator, ExxonMobil, is planning to install two fixed platforms and two FSOs. The four living quarters will be almost identical, with the exception of somewhat different bottom levels for the fixed and floating platforms. Bids for the first two were due to be submitted in January.

In another sense, the international offshore industry has also standardized, in that most projects around the world now specify North Sea standards of construction and outfitting. This has been a beneficial development for Emtunga as it is well accustomed to working to these standards.

Emtunga is now well established as an international supplier, and wins most of its work from outside the North Sea. Its reputation appears to precede it. "We're surprised at how well companies are informed about us, even when we haven't had contact with them before," says Wallin.

Emtunga is now under way with early design work on two new international contracts. One is a 900-ton unit with 87 beds for Unocal's West Seno development in Indonesia. The contract was placed by Unocal but will eventually be transferred to whichever Indonesian fabrication yard wins the main platform contract. The unit, which is due to be shipped from Sweden in February or March next year, will be delivered in several sections, at the customer's stipulation, and assembled at the platform fabrication yard.

The second new contract is for a similar size module, but Emtunga does not yet have clearance to say which project or company it is for.

Emtunga is also still actively bidding for North Sea work, and in March was awaiting contract award for the 1,400-ton, 110-bed quarters for Norsk Hydro's Grane platform. Here bidders had a choice of offering steel or aluminum; aluminum is lighter and rust-resistant, but costs more. Emtunga chose steel. "We think steel provides the most cost-effective solution," says Wallin. "With proper corrosion protection, there is no difference in maintenance cost." Where some installations are concerned weight is not a decisive factor, he says. As the Grane topsides will weigh around 25,000 tons in total, the weight of the accommodation module is not a major factor. The Grane module will be delivered as part of a combined unit including a utilities module, and it was to the suppliers of this module that Emtunga bid.

This month, the company was due to deliver the 1,000-ton accommodation module for CTOC's Cakerawala gas platform in the Gulf of Thailand. This will be handed over to main contractor Samsung at the quayside in Gothenburg, and shipped to Korea. As some of the platform crew will be Islamic, the unit contains separate halal and non-halal kitchens and food storage areas.

Construction is also well under way with the 1,300-ton living quarters module for ExxonMobil's Ringhorne platform in Norway. This is a subcontract from Heerema T nsberg, which has EPIC responsibility for the platform. The 1,300-ton module, which will have 110 beds, is due to sail away from the Gothenburg yard in mid-October.