How to keep biodegradability, low toxicity 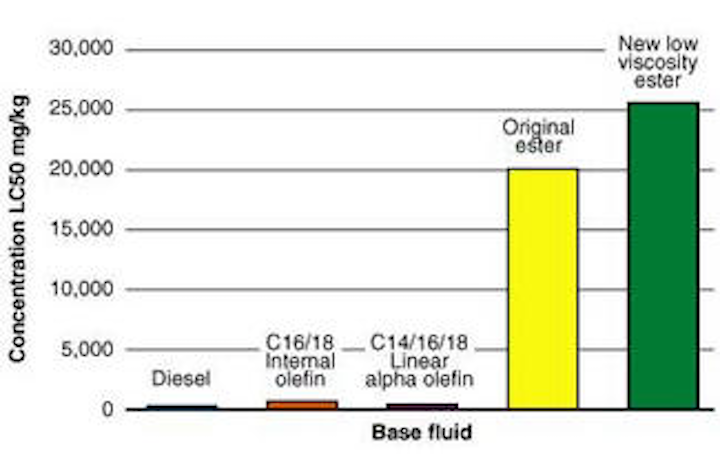 In 1985, development began on a fully biodegradable base fluid at the request of operators facing restrictions on the use of and discharges from conventional oil base fluids. Esters were found to be the most suitable naturally derived base fluids with potential for use in drilling fluids.

Following the success of esters, other drilling fluids classed as synthetics were formulated, but these synthetics have not matched the environmental performance of ester-based drilling fluids. One important criteria they have failed to meet is biodegradability. Additionally, some were rejected for poor eco-toxicological or technical performance.

Due to the increasing push into greater water depths, a low viscosity (LV) base fluid was required to give operators the choice of using a system that fulfills more technically demanding requirements than existing ester-based systems. The conventional ester is a C12-C14 fatty acid based, 2-hexyl ethanol ester manufactured from palm oil, which can be too viscous at cold temperatures to be useful for deepwater drilling. Research demonstrates that the alternative C8 esters have lower viscosities than their conventional equivalents over a wide temperature range. This led to the development of a lower viscosity C8 ester based drilling fluid.

Conventional esters have fallen into disuse in shallower areas of the Gulf of Mexico (GOM) due to the perception that the elevated viscosities at cold temperatures contribute significantly to excessive equivalent circulating densities (ECDs), increasing risk of lost circulation. The development of an LV ester-based fluid gives operators a choice that combines technical performance with environmental benefits across drilling conditions.

Typically in the GOM, mud is mixed in a mud plant, transported to the rig, and then circulated. The mud is exposed to higher temperatures as hole depth increases, and the mud is static in the hole during logging and trips. The fluid must be able to tolerate drill solids and water influxes that may be experienced during drilling operations. In addition, for safety reasons, the drilling fluids must be stable to at least 2.0 lb/gal above the drilling density. The test protocol was developed to simulate and test the effects of those conditions on the LV ester-based fluid.

Three LV ester fluids were subjected to the protocol: an 11.0 ppg mud, a 14.0 ppg mud, and a 16.0 ppg mud. These weights are typical of those used in the GOM. Tests were also run on a 17.0 ppg C8 LV ester fluid to ensure that the fluid would perform at higher-than-normal densities.

The three muds tested showed temperature stability from 0°F to over 300°F. This temperature range encompasses the vast majority of operations in the GOM. Fann 75, high pressure and temperature rheological data, indicated yield points of 6, 8, and 8 lb/100 sq ft at 300°F for the 11.0 ppg, 14.0 ppg, and 16.0 ppg fluid, respectively. These fluids also provide adequate low-end values (6 and 3 rpm) to support suspension of cuttings while maintaining yield points of 50 lb/100 sq ft or less at 40°F. Ester-based fluids should not be used to drill wells that reach temperatures greater than 320°F. However, fewer than 10% of the wells in the GOM are predicted to have temperatures exceeding 320°F. The majority of these wells are on the shelf where shipping of cuttings to shore can be readily done, or is already necessary due to coastal discharge restrictions.

While the use of mud weights exceeding 15.0 ppg for current deepwater applications is rare, it is possible that higher mud weights will be required. Low viscosity C8 ester fluids have been successfully formulated to 17.0 ppg.

Unlike the conventional C12-C14 ester, the16.0 ppg and 17.0 ppg LV C8 ester fluids were formulated and tested with an 80/20-ester/water ratio (EWR). A conventional C12-C14 ester-based system would require a 90/10 EWR at these densities due to base fluid viscosity. Flexibility in EWR choices enables the fluid to tolerate water contamination with fewer detrimental effects.

There is also an economic advantage. Based on the amount of oil required per bbl of mud, utilizing a 70/30 EWR versus an 80/20 EWR in an 11.0-ppg fluid reduces the base oil requirement by 12.4%. The cost per barrel is reduced proportionally, and less ester is discharged on cuttings, giving additional environmental benefit.

In order to evaluate the effect of solids contamination to a fluid, the American Petroleum Institute (API) recommends simulated solids stressing of drilling fluids at a concentration of 35 lb/bbl for mud weights below 15.0 ppg and 20 lb/bbl for muds above 15.0 ppg (API RP13 I, Section 24.6). The GOM protocol solids stressed the muds at concentrations of 20 lb/bbl and 40 lb/bbl. In all three-mud weights tested, there were no significant effects on fluid properties. The 14.0 ppg fluid was tested with up to 80 lb/bbl of solids contamination with no detrimental effect on rheological properties.

One of the limitations of the conventional C12-C14 ester systems was high viscosity below 40°F. Using the same formulations, the 600 and 300 rpm Fann 75 dial readings are significantly lower for the LV C8 ester, compared to the C12-C14 conventional ester. Also, with the same testing protocol, the LV C8 ester fluids show rheological properties similar to the internal olefin fluids used in deepwater GOM.

Shorter chain length, low viscosity C8 esters were developed in response to viscosity issues in deeper waters. The viscosity of the LV fluid is similar to or less than that of other synthetics employed in the GOM and offers the following technical advantages:

Substantial testing of this fluid was carried out using a testing protocol designed to simulate conditions to which a fluid may be exposed, including evaluation of temperature stability, low temperature rheological properties, and tolerance to contamination.

As a class, esters have always been recognized for providing the best environmental performance of any synthetic based fluid. Test data demonstrates that the new LV ester exhibits all the advantages typically associated with esters. The simplest test method is to place the fluid in an aerobic environment and allow the fluids to degrade for a period of time. The extent to which degradation takes place can then be measured. However, a better indicator of the extent of degradation expected in the field is the anaerobic biodegradation test. When base fluids become buried in cuttings piles, the available oxygen very quickly falls to zero. Because of this, degradation is best measured in similar anaerobic conditions.

Typically, internal olefin degradation under anaerobic conditions, as measured by the ECETOC test, is 42%, or less than half, of that typically measured for both conventional and low viscosity esters. However, aerobic degradation is measured at similar rates for internal both olefin and esters in the Paris convention's biodegradation of insoluble substances test (BODIS) aerobic biodegradation test.

In a further set of anaerobic tests run by the US Environmental Protection Agency (EPA), conventional C12-C14 ester showed significantly greater degradation than all of the other drilling fluids tested. In contrast, internal olefin results could not be easily discerned from other fluids. In concurrent tests completed by the same laboratory, low viscosity C8 ester showed patterns of degradation similar to those of the conventional ester.

The anaerobic closed bottle test indicated one primary result: only ester-based drilling fluids biodegrade significantly in a reasonable timespan. It has been suggested that other fluids tested were in a lag phase for periods of up to and including 160 days. However, if such fluids do not biodegrade in ideal conditions in the laboratory (68°F) in such a timespan, it is not expected that they will degrade well in colder, anaerobic conditions in the field.

The toxicities of both LV and conventional ester-based fluids are very low, when tested using both US and European test species. In US EPA Leptocheirus 96-hr toxicity testing, a suite of base fluids was tested simultaneously with the low viscosity C8 ester and conventional ester so that a comparison of resulting data could be made. An independent laboratory using EPA recommended methods carried out the tests. Results indicated that both ester base fluids are much less toxic than other conventional base fluids.

A series of representative base fluids and whole muds were also run in the 96-hour and 10-day solid phase toxicity test by industry. Again, esters showed superior performance.

Seabed surveys taken after the discharge of cuttings generated by any synthetic-based drilling fluid indicate there is a smothering effect on the seafloor as the result of deposition of cuttings. As soon as any organic matter begins to biodegrade, the levels of oxygen are further reduced, which affects benthic communities.

However, the biodegradation of esters continues in the absence of oxygen, which is the situation found in cuttings piles. After degradation, the cuttings become water-wet, hydrated, and dispersed, aerobic conditions are re-established, and re-colonization by benthic infaunal individuals occurs. The animal communities recover shortly after discharges have ceased.

One year after discharge of cuttings drilled with an ester-based fluid ceases, subsequent surveys indicate seabed recovery, reflected in species diversity and number, and also in total abundance of individuals.

Apart from the rapid recovery of the benthic community, all surveys have shown that the levels of ester in the sediment were below 5,000 ppm in most cases. These concentrations were greatly reduced within one year, and two years after drilling, the levels were all but undetectable. Similar patterns of recovery are expected with the LV ester.

When field-tested on a GOM well in 3,669 ft water depth, the LV ester-based fluid demonstrated promising performance. Based on PWD measurements, the ester fluid showed lower ECDs than those observed while drilling a comparable interval with internal olefins on an offset well. The biodegradation and toxicity performance of esters is "best in class" among synthetic based fluids. The C8 ester achieves similar results in these important environmental measures.