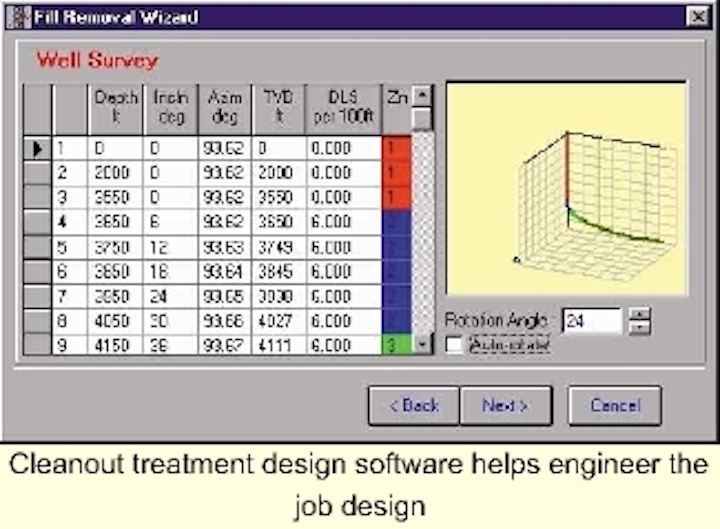 A concept to address the age-old problems associated with cleaning sand and debris from large diameter, deviated, or horizontal wellbores has been developed as a result of a recent Halliburton and Baroid investigation. The process was developed because the use of coiled tubing with standard industry practices yields poor results. Based on full-scale testing, the investigation revealed three areas where problems can occur in coiled tubing use:

Significant lessons learned from blind use of polymer sweeps and old rules of thumb, resulting in high failure rates and inefficient cleanouts, has resulted in a new-engineered approach that Halliburton calls CoilSweep. The service involves a three-tier approach to the problem:

Utilizing real-time data acquisition systems (DAS), the force plot can be used to monitor the cleaning effectiveness downhole. The DAS compares the forces of previous trips across the same sections of tubing. The cleaner well profile will provide less resistance.

Poor cleanouts cause severe problems, which, in some cases, are not evident until the well is put on production. These problems could include the following:

The proposed service provides four different fluid systems so that a treatment can be tailored precisely to well conditions, whether the priority is hole cleaning, return permeability, or both. These systems are used for hole cleaning (fluid density up to 11.0 lb/gal.), returning permeability for viscosified bromide fluids up to 20 ppg, extremely sensitive formations, for mild gelling applications, a foamed system for low bottomhole pressures, or where sufficient velocities cannot be obtained to clean hole and restore permeability.

Testing has shown that slow wiper trips are the only effective means to remove solids from deviated wellbores above 55 degrees. Recent designs of tool capabilities produce up-jets that help transport fill deposits out of the well and down-jets that help remove hard packed debris by jet washing prior to the final wiper trip so sand and other wellbore debris can be removed effectively. In conjunction with proper job design, the tool can aid in efficient sand and debris removal from large geometries by inducing turbulent flow around the bottomhole assembly.

One operator in the US Gulf of Mexico had formation fill with particle sizes up to 3/4-in. diameter in a well with suspected casing damage. Conventional wash techniques could not remove this debris from the well due to low annular velocities. In addition, the coiled tubing involved in the first attempt had almost become stuck twice trying to wash the oversized fill.

Using this new process, a fluid system was selected and programs were run to predict cleaning efficiency. With the same size coiled tubing at the same wash rates and velocities (less than 90 ft/min), the well was successfully washed out to the required depth.

Another operator had smaller diameter coiled tubing due to crane weight limitations on the platform. The objective of the job was to wash out the well and shift a sleeve. The coiled tubing unit encountered fill high in the production tubing and could not make any further hole.

The fill was determined to be large dense pieces of perforating debris. The operator decided to utilize the new process at this point, and the fluid system was switched. The small coil unit was able to get a 35% increase in rate at the same pump pressures and was able to wash past the sleeve. The sleeve was shifted successfully.

In another well in Venezuela, following a frac job with resin coated bauxite, coiled tubing was mobilized to clean out a large diameter deviated wellbore. The first attempt was unsuccessful, so a second attempt utilizing the new process was employed. The fluid that best suited the conditions of the well was chosen, and a wash program was created that matched the well conditions and equipment limitations. The well was cleaned out successfully.