Learning how to use second station 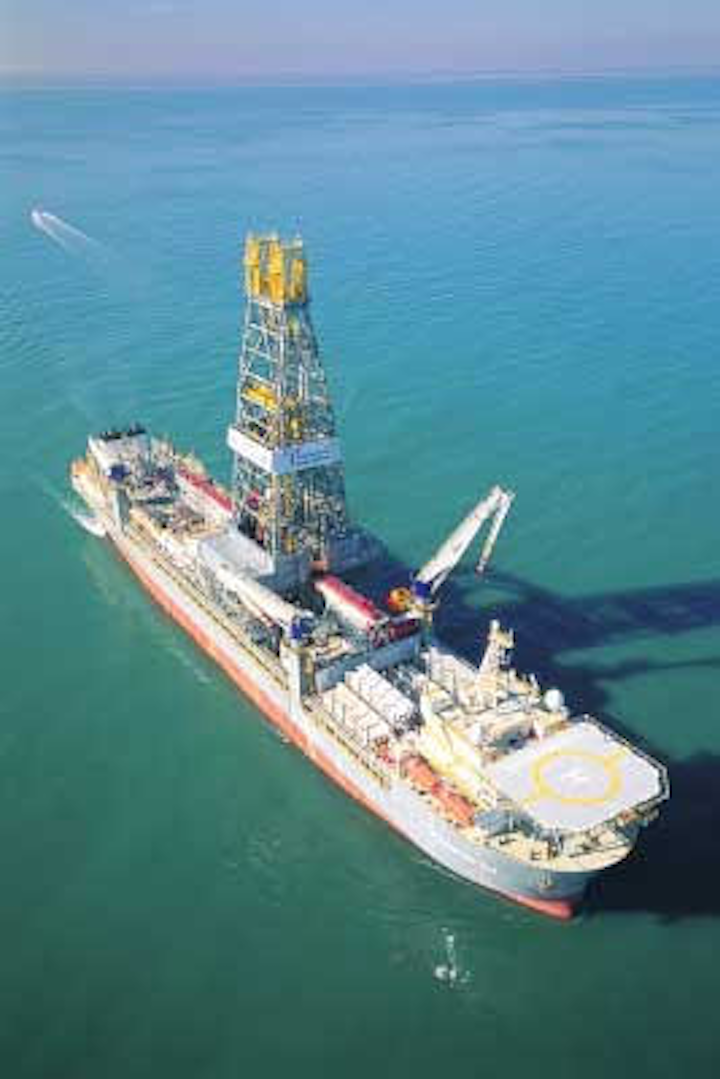 Chevron measured the effective day rate in terms of how much less the rig would cost to accomplish the same dollar value of work with a single rotary. The company calculated total well cost savings by determining what another rig leased at this rate and performing the same number of rotary hours per day would have cost to complete the same scope of work. This figure factors in offline work performed on the second rotary, which would have been done in series in a single-derrick drillship, along with costs such as transportation and daily rentals.

When all numbers are taken into account for the two wells, the savings far exceeded expectations. But Chevron Drilling Superintendent Curt Newhouse, cautioned against excessive expectations for future wells. "These were relatively shallow exploration wells that didn't require many strings of casings. A deeper well wouldn't have yielded such high numbers," he said.

Despite this caveat, Newhouse said he was "extremely pleased" with the performance and with the reliability of the technology. According to his account of records kept during drillling activities, there was less than 3% downtime using some very high-tech equipment. Newhouse attributed some of the Discoverer Deep Seas' success to lessons learned from two sister ships (Discoverer Enterprise and Discoverer Spirit) that were incorporated into the design, outfitting, and commissioning of the Deep Seas. "The caliber of people that Transocean Sedco Forex dedicated to the Deep Seas has also played a major role in the success that we've seen to date," he said. If the first two successes of the Discoverer Deep Seas are an indication of future achievements, dual-activity drilling will pay off.

"I think as time goes by, we are seeing a lot more savings. We didn't fully anticipate the advantages we are seeing. For a new vessel, I think it's really been outstanding," said Eddy Redd, Transocean Sedco Forex Rig Manager.

Realizing the extent of dual-activity drilling's potential will take some time, in part because it requires re-thinking the entire drilling process. "Planning is more looking into how you can optimize your second station," explained Dorrith Niepce, Transocean Sedco Forex Drilling Engineer.

Mindset can be an impediment to utilizing dual-activity capability to its greatest extent. "We have learned with Chevron how to optimize the rig with all this flexibility, but one thing we're going to stress with future operators is that they do need to bring all of their supplies out. We can have them on board. We can take a huge volume of mud aboard because of the size of the deckload. They need to make sure everything is out there, so that we have the flexibility when we need it," Niepce said.

With the deckload capacity, operators can carry a lot of backup equipment onboard, instead of leaving it in the yard. Doing so can help to avoid delivery delays caused by distance from the yard and by inclement conditions that can delay delivery and can prevent offloading.

Many of the limitations are born of traditional thinking, not from actual shortcomings in rig design. It takes some mental adjustment to get accustomed to the storage capability and versatility of the dual-activity drillship. With that said, however, there are reasons for limiting the inventory carried on the ship. If inventory isn't used, it is unnecessarily occupying space that could be better utilized. Furthermore, carrying inventory costs money.

Even without carrying the maximum load of supplies, the Discoverer Deep Seas has been able to handle adeptly last-minute contingencies. Eddy Redd explained, "The ease of changing direction has been the most surprising thing to me."

To get the most out of the new rig's capability, Chevron is capitalizing on information technology systems to drastically enhance project scheduling and to speed the learning process. They are using "getSmart" as an organizational learning tool, which allows them to integrate two separate project schedules (one for forward rotary and one the aft rotary) to create Gantt charts in Microsoft Project.

Planning has to take on an entirely new dimension, and operators are having to take a good look at the big picture to execute the appropriate activities at the right time. Doing so allows drilling activity to be completed on one well and begun on another without "wasted" time between wells.

While the crew is finishing off one well, they can actually be picking up and racking back casing for the next well. There is really no down-time between one location and the next, because the equipment is already onboard.

In short, the operator needs to lay out a series of wells in order to avoid unnecessary downtime and to take advantage of the rig's efficiencies.

"We'll see more savings when we do something other than single wells, such as when we get into completions.