Implementation of subsea boosting over the last decades has included multi-phase pumps, some with separation and pumps combined. To further improve robustness, reduce risks, and reduce total capex, continued development and qualification of innovative compact inline and novel spherical type separators is ongoing. 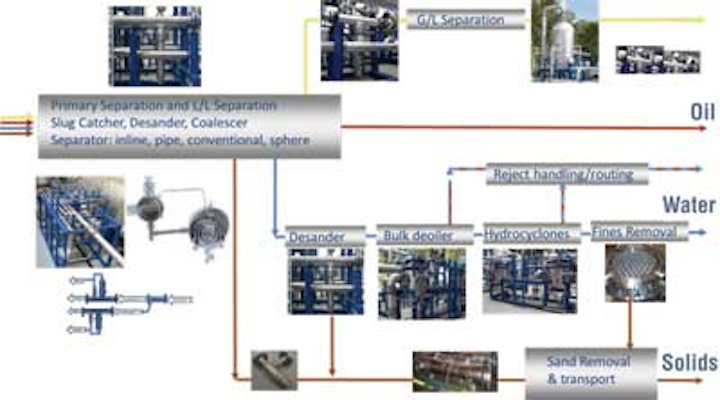 Comprehensive technology qualification is one key to application

Implementation of subsea boosting over the last decades has included multi-phase pumps, some with separation and pumps combined. To further improve robustness, reduce risks, and reduce total capex, continued development and qualification of innovative compact inline and novel spherical type separators has been done and is ongoing.

To qualify separation technology, testing flow loops with realistic conditions is required. The use of such a facility with high flow rates and real hydrocarbons at elevated pressures allows for comprehensive testing in the full operating window to reduce the uncertainty prior to field deployment.

More common to date is the use of multi-phase boosting, without any seafloor separation, using rotating equipment. This can transport gas and liquid in the common risers, requiring robust flow assurance measures to mitigate gas hydrate formation.

Including subsea separation of gas and liquid on the seafloor has several advantages. It can reduce the risk for hydrate formation and reduce the overall energy requirements. Furthermore, the topsides can be simplified and the capex of the host platform topsides can be reduced. If the aspects of oil/water separation and produced water treatment are included on the seafloor, which can be relevant to consider for mature fields, it can allow for produced water reinjection into the well and support to maintain reservoir pressure.

So the subsea separation toolbox needs to cover the incoming wellstream for slug catching and primary separation of gas and liquids, oil and water, as well as any potential sand separation. Sand removal can be critical to protect equipment from unnecessary erosion and deterioration of equipment life.

Typically, gas and liquids are separated in pressure vessels with a set of internals, for instance with an inlet device and demisting internals. Over the last decade, the use of pipe-based inline gas/liquid separators has increased, as these have proven to have high performance and good robustness in terms of operating range (handling large liquid volume fraction) and fluctuating inflow conditions (liquid slugs) when designed in a two-stage arrangement. Furthermore, with the optimization of the internal swirl element, the pressure drop over the two stages is considered acceptably low for most applications.

The inline separator at the inlet of a good wellstream distribution is provided into the static swirl, whereby the liquids gets a high rotational movement and forms a liquid film along the pipe wall as the liquids separate from the gas under gravitational forces. The liquids are extracted and routed into a liquid boot, while the central flow of gas with some possible remaining liquids goes to a second stage static swirl, with the same function, and later extraction, prior to a pressure recovery device and gas outlet. The liquids are collected in the boots and routed to a liquid hold-up vessel, e.g. a downstream separator. This allows for a high separation efficiency, relative high turndown ratio, and fluctuating flow conditions robustness.

The dual-stage inline separator is one key technology that covers the full 0-100% gas volume fraction range.

It is important that a qualification program cover the full or most of the anticipated or known operating windows and that the program uses realistic conditions.

As an example, the dual-stage inline separator has been tested under realistic conditions at elevated pressures (up to 180 barg) and resulting low liquid surface tension. Under the testing the amount of LVF varied from 2-3% up to 16% (limitation of the test facility). The results showed a high separation efficiency, even when the incoming gas flow was reduced to one-third of the nominal flow rate, as a measure of turndown ratio [Schook, 2011].