At a time when most offshore companies are rapidly trying to streamline operations and shed extraneous costs, Blue Capital Pte. Ltd. (Singapore) chairman and CEO Brian Chang collaborated with rig designer Peter William Nimmo to develop the mobile mono column platform, a design Chang refers to as "back to basics." Simply put, the MCP prototype is designed to monetize fields in less than 500 ft (152 m) of water as quickly as possible, Chang says. 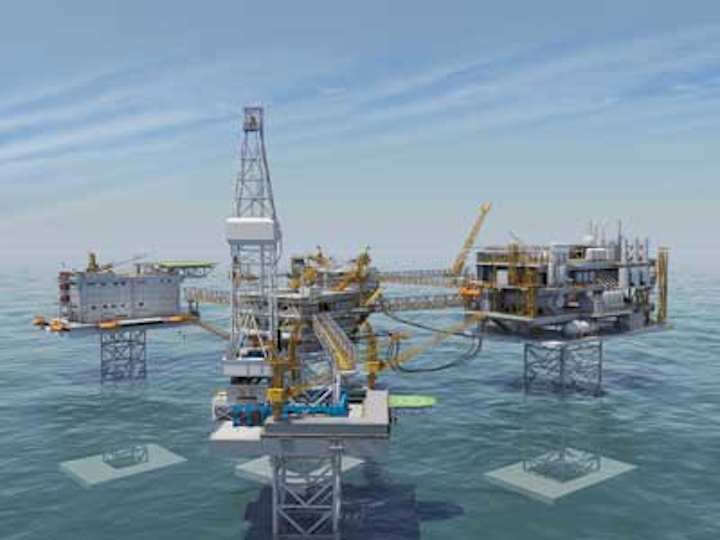 At a time when most offshore companies are rapidly trying to streamline operations and shed extraneous costs, Blue Capital Pte. Ltd. (Singapore) chairman and CEO Brian Chang collaborated with rig designer Peter William Nimmo to develop the mobile mono column platform (MCP), a design Chang refers to as one that is "back to basics."

"We reassembled existing, proven technologies in a pragmatic manner to create offshore real estate," Chang said. "While other rigs might look similar to the MCP, these do not use the same components."

The MCP prototype is designed to monetize fields in less than 500 ft (152 m) of water as quickly as possible, he said.

Mat-supported jackups have been an industry standard for decades; the Society of Petroleum Engineers says that a forerunner to the traditional jackup as it is now known first appeared around the mid-1950s. But the prototype MCP, financed through Blue Capital's subsidiary Calm Oceans Pte. Ltd. (COPL), offers a unit vastly different than the traditional spudcan. It can operate on a soft seafloor without punch-through risk, COPL says. Additionally, no pre-loading is required.

Supported on a single leg, the MCP jackup unit consists of a deck box mounted on a four-chord square truss structure on a mat foundation, the latter of which can be jacked up during decommissioning to allow for more easy relocation. The high-payload MCP can maintain a higher variable deck load during transit than the limited variable deck load offered with conventional jackup units. The MCP prototype, namedCalm Ocean 101, can support a topsides payload of 5,000 metric tons (5,511 tons) and hold wet load up to 6,500 metric tons (7,165 tons), with future units capable of being tailored to customers' needs. The unit can also be situated upon a seabed sloped up to 2°.

TheCalm Ocean 101 rig is designed to provide companies valuable offshore real estate in waters up to 500 ft (152 m), allowing them to access and monetize the marginal fields whose potential profits might have previously eluded them. These fields, smaller and isolated from the main, primary field and its infrastructure, are conventionally deemed not economically valuable or too risky to develop. Of course, economic viability is up for discussion and liable to reset upon every drop in oil price. However, ideal conditions for the prototype MCP are field developments in the early stages of production, in mid-level water depths – including and especially marginal fields.

Australia, the Philippines, China, Indonesia, Vietnam, Malaysia, India, Gabon, and Congo were places Chang said the company had looked at to deploy the MCP, noting that it was found to be suitable in those field conditions. He called the unit "very flexible, economical and financially feasible for marginal field developer," pointing out that unlike a jacket, construction vessels are not required to install or uninstall the MCP.