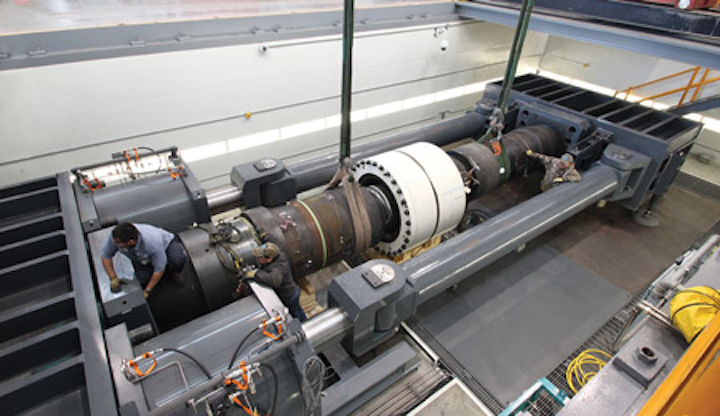 The standard wellhead systems used today include mandrels with 27-in. and 30-in. OD and conductor casing with up to 38-in. OD. But, these configurations may not resist the high load magnitudes and combinations expected in HP/HT applications.

Speaking toOffshore, Kaculi stated: "Moving to higher-capacity wellhead systems will require a larger mandrel, connector, and conductor casing size to accommodate higher loads encountered during drilling and production operations. Considering the ongoing industry efforts to standardize equipment, it was a great opportunity to define the anticipated loads and select an appropriate larger wellhead size that will cover the needs of the industry for the coming decades."

A survey with information provided by operators and contractors also forecast that HP/HT applications would need a larger wellhead mandrel design.

"There is limited published information on HP/HT material properties, and this is an issue that the industry has to address," he said. "The uncertainties on how the materials behave in such HP/HT environments and the lack of data needed for analysis makes it difficult to conduct a proper verification analysis."

As the size of the mandrels and conductor casing move to higher capacities capable of enduring the high loads encountered during various drilling and production operations, a new and advanced design concept of the wellhead connector and mandrel was developed. By properly verifying and validating its HP/HT capabilities, it also defined the anticipated loads needed in HP/HT environments. In addition to defining the static and fatigue loads, Kaculi added, a proper verification analysis requires an input of correct material properties at different temperatures, pressures, and environments.

Dril-Quip started with the design concept of the DX connector and used design tools to perform an advanced finite element analysis (FEA).

Kaculi noted: "The tooth profile curvature, overall load distribution, and minimization of surface peak stresses were just some of the design features closely examined in the pursuit of absolute maximum fatigue performance."

The company has optimized the connector profile over numerous analysis iterations to achieve the most uniform load distribution between the engaged teeth at various load combinations and magnitudes. The new design helps contain high fatigue resistance due to significant reduction of stress amplification factors at all the critical fatigue locations within the profile. It is utilized by the connector upper body, latch segments, and wellhead mandrel interface. The overall connector design is a "clamp segment" type which "behaves as a simple hub and clamp arrangement," he stated. "Bolts attaching the connector outer body and cover plate are not in the load path and do not see any significant structural or fatigue loads." The new profile is set to extend the service life under severe cyclic loads and high-static load magnitudes.

Kaculi and his engineering team then had to address the load and weight parameters to comply with a 20 ksi BOP stack when there is not one currently on the market. "There are no exact numbers on the weight of the 20 ksi BOPs, but we know roughly what those numbers are going to be," he stated. "We had to play it on the conservative side and assume a 1.5 to 2 million pound BOP weights."

The new system offers an 18¾-in. bore and 35-in. mandrel OD, resulting in a thicker cross-sectional wall which results in a higher static capacity. The connector is thought to have twice the structural capacity of a typical 15 ksi 30-in. mandrel design, and it is rated for 20 ksi internal pressure. It has more than 20 million ft-lb survival bending capacity, and is engineered with special design features that allow no significant bending capacity reduction due to pressure end load when the pressure is increased.

He added: "We don't see any limitations of our system to the weight of the BOP, because we've more than doubled the capacities. No matter what happens with the BOP weights, and capping stacks, and all the other factors, it's not going to exceed the design capacities that this new system provides - which was key for us in deciding what the size of this new wellhead would be."

The traditional methodologies use hand calculations and 2D FEA, and they work well for simple round members but have deficiencies when applied to complex geometries and loading conditions. Kaculi noted that a more advanced analysis method and 3D FEA modeling was necessary and led to a model with more than a million elements to evaluate the structural integrity and fatigue performance. The analysis was completed using ABAQUS analysis software. "It examined the stresses developed during the preload and combined loading of the connector to the normal, extreme, and survival loading conditions," he added.

At the present moment, there are industry standards that guide the design of wellheads, but Kaculi noted that "unlike the standards for casing connectors below the mudline, there are no requirements to test the wellhead at a system level, nor to test the limits of the equipment, which would confirm the design margins."

The wellhead system, inclusive of the connector assembly and the low and high pressure housings, was preloaded onto the company's own, in-house built Horizontal Test Machine, and subjected to a combination of incremental bending movement, tension/compression, simulated casing weight, and pressure until the capacity for normal, extreme, and survival conditions were reached. This machine is capable of producing more than 20 million pounds of bending, 13 million pounds of tension and compression, and six million pounds of simulated casing weight. •