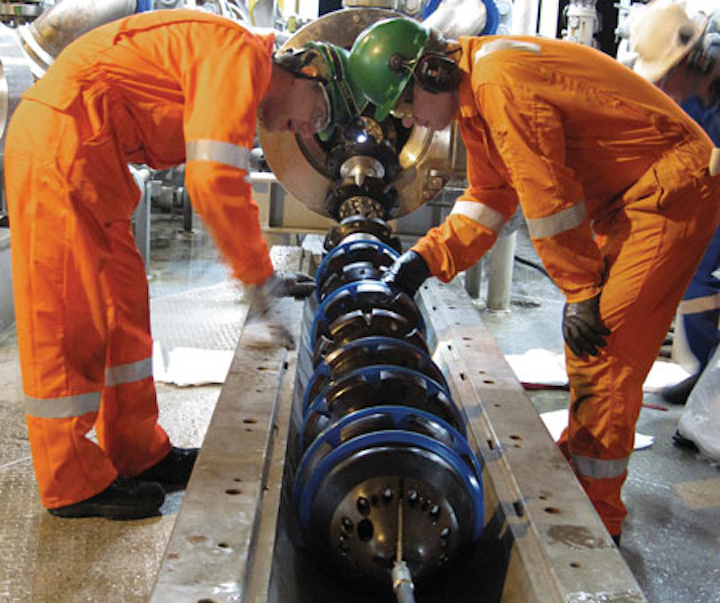 Recently, BP Angola needed a baseline inline inspection (ILI) of the 36-km (22-mi) Plutao deepwater flowline and riser systems, which operate in waters down to 2,000 m (6,500 ft) offshore Angola. The baseline inspection was part of the operator’s standard practice, and was designed to provide a blueprint of the pipeline, giving exact internal inspected status following commissioning.

When the BP subsea projects team began the ILI campaign, its first challenge was to thoroughly prepare for every possibility. Unexpectedly, the Plutao operation experienced a shutdown. This gave the team a new window of opportunity to start the project ahead of the initial schedule, with the condition that mobilization had to start within 24 hours to coincide with this unforeseen shutdown.

To run the ILI equipment, it was first necessary to clean the flowline with a series of pigs, each designed for a specific task. The first step was to use a foam pig to ensure that all of the valves were fully open. Then, a de-sanding pig was used to dislodge accumulated sand and wax, and to sweep away any debris. Finally, a gauge plate pig with a special disc matching the diameter of the pipeline was run to verify that the pipeline had the required bore for the inspection tool.

Once the team was mobilized, initial cleaning pigs in the line went as planned. The debris returned was minimal, indicating the line was cleaner than expected. A decision was then taken to run the gauge pig ahead of schedule.

When it returned to the surface, the gauge disk resembled a bowl rather than the flat plate that had set out on the journey. This identified a problem. The challenge now was to engineer a solution in time to safely run the ILI tool below its current design limit, keeping risks within acceptable levels.

BP has a worldwide agreement with NDT Global for intelligent pigging services. After a review of requirements, an advanced ultrasonic tool was selected to accurately measure wall thickness and metal loss. The use of ultrasonic measurement is particularly important since it ensures accuracy in thick wall pipes, which other technology cannot achieve.

While NDT Global’s tools are designed to be customized to specific customer requirements, any tailor-made tool still requires both testing and qualification. A test loop that replicated the pipeline characteristics and flows was built onshore at the company’s test yard in Stutensee, Germany. The project tool followed a meticulous test program before being delivered to site.

When the gauging pig (deployed offshore) returned showing a reduced minimum diameter, a rapid response was required. This new diameter was below the qualified diameter of the intelligent ILI tool, but the team needed to complete the planned inspection during the shutdown window. The NDT Global engineering team worked with the Sunbury flowlines team to develop a plan that would “put the pig on a diet.” These teams worked together to identify and mitigate risks for design changes to the tool. After 96 hours of re-modeling, design assurance and risk assessments, the green light was given to launch the modified UMp tool.

With the reconfigured ILI tool, the following results were obtained:

Reduced operations downtime. Halting production at such an important facility is very expensive. (The operation has a production rate of 150,000 b/d.) The project team successfully leveraged an unexpected shutdown to conduct the ILI with minimal disruption to flowlines. This was only possible due to the responsiveness of the team and reliability of the tool.

A successful campaign. Eleven months of planning permitted 10 successful pig runs to be safely executed over 18 days, while overcoming a bore restriction that could easily have destroyed the campaign on the fifth run. Open communication between BP and NDT Global was vital to overcoming these challenges, especially when critical issues arose.

First run success.The new flexible tool achieved a first run success. It returned safely to the FPSO and the first run was completed in the planned 16 hours. The modifications that had been made did not adversely affect the inspection, which was essential for the overall project plan.