Operators have been pushing for lower project costs long before the oil price started to tumble. 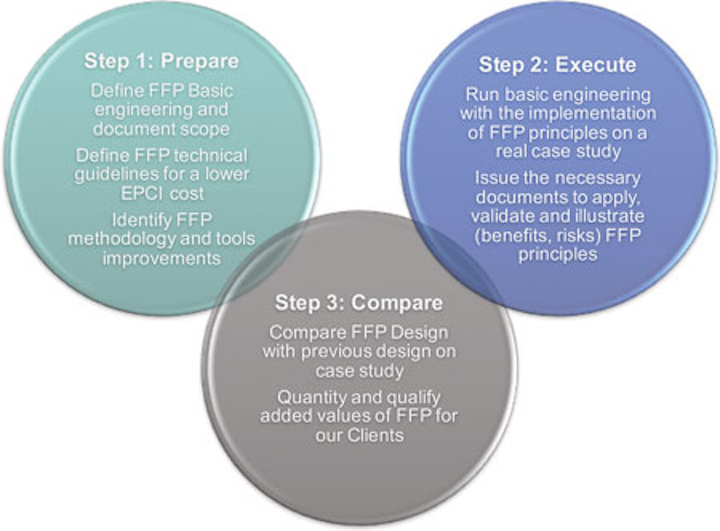 Operators have been pushing for lower project costs long before the oil price started to tumble. Solutions are needed urgently because as DORIS Engineering points out, many approved offshore field developments are over budget, while others are being postponed or even terminated. One recent example is Bonga Southwest offshore Nigeria, which Shell and its partners decided was not economic in the current climate.

In response, DORIS undertook an internal, independent study involving a 20-strong team to determine a new way forward. The resultant ‘Fit for Purpose’ project outlines various reasons why costs have escalated. High on the list is the fact that many offshore facilities are over-designed and/or overspecified, the contractor claims, leading to some being capable of producing up to 10-15% more than their nameplate capacity. Another recurring issue is that client’s demands are often beyond their actual needs.

According to DORIS’ CEO Nicolas Parsloe, “operators are telling us prices are too high, so everyone needs to come up with some form of cost cutting. However, cutting contractors’ rates is not the answer - what is more relevant is the need to cut down the scope of the project definition, and to get clients to state more clearly what they require. We want to convince our clients that there are gains to be made.

“Offshore Angola, there are many marginal fields that are not feasible to develop today but which could be in the future, even if low oil prices continue, especially if the government acts to improve the tax aspects. This is one part of the world, but the same situation applies elsewhere - everyone from governments and operators to contractors need to work at this.”

In February, DORIS executives travelled to South Korea to explain to organizations such as DSME and Hyundai Heavy Industries what the company is trying to achieve. “At some point we are hoping to gain their co-operation in bringing down costs,” Parsloe explained. “It’s not just a case of increasing standardization - the industry has already done that - but more of facing the realities. Prior to the oil price decline there were too many new offshore projects and this may be why things are now being delayed. There is a need to overhaul the traditional way of doing things.

“What has led to the growth in costs has come partly from the operators and what they have been asking for - adding, for instance, layers of field operator satisfaction and comfort, both of which push up prices, as well as shifting the risk to the contractors. What we are proposing instead is a solution that is ‘good enough,’ with an emphasis on quality at the lowest price - not the cheapest possible solution - for an EPCI program.”

Under ‘Fit for Purpose,’ DORIS proposes identifying needs that might be different from what the client thinks it needs. According to technical manager Frédéric Lemois, “there is one example offshore where the operator was producing 240,000 b/d whereas the facility was supposed to produce 200,000 b/d. This is not an ideal situation - it could be the result of cumulative conservative assumptions about the equipment during the design phase, and could explain the difference in cost between what was engineered and the actual outcome. So there is a need to stick more closely to the nameplate capacity.

“Another of our new objectives is to provide front-end engineering and design (FEED) at the lowest price, and to reduce the duration of the FEED. This can be achieved via rationalization and optimization of the documents that we produce. This process also impacts the EPCI cost - today, the volume of call-for-tender documentation is huge in terms of specifications and standards, with the result that some vendors will not respond while others will respond in a conservative way because the documentation is too complex. Again, this is something that we are working to address.

“During the FEED we specify and quantify what is needed for the installation. We decrease the EPCI cost by decreasing capacities where possible - this involves rationalizing the accumulation of margins in all disciplines. One example is compressors - what tends to happen is that the company process engineer takes up his 10% margin on compressor flow rate, then the mechanical engineer, when asked for his input, specifies a 10% margin on top of the process specialist’s figure, and eventually the electrical engineer asks for a further 10%. If this procedure is replicated with other items, you end up with facilities that can process much more than is actually needed.

“Another idea is to simplify the equipment specifications by revisiting international codes and standards. This could mean, for instance, assessing whether a pump on an FPSO needs to be client specification-compliant when the equivalent API or even ISO standard might be cheaper. We’re not doing this exercise alone but in co-operation with operators, shipyards, and vendors. We are getting a lot of input from engineers and vendors on the types of equipment that are really needed on platforms. Our goal is to challenge the original design base, and the performance that is typically expected for the planned facilities. This could mean questioning whether increasing target availability from say 97.5% to 98% is worth the extra cost? It’s a case of assessing the design envelope against the actual operating envelope.”

“We think we can bring something to the table not just to the operators, but also to contractors,” Parsloe added. “For Total’s Usan FPSO offshore Nigeria, contrary to other FPSO projects at the time, between the FEED and the detail design stage the topsides weight did not go up. As the designers, we considered this was in the best interests of all parties in the project. We’re not into EPCI ourselves - our interest is to make sure that a project goes forward to the client’s satisfaction.”