Wood Mackenzie has identified five themes to watch for this year on the Norwegian continental shelf. 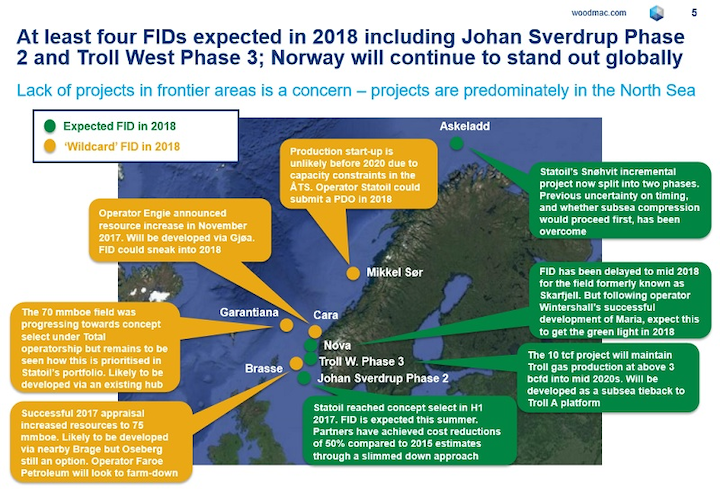 EDINBURGH, UK – Wood Mackenzie has identified five themes to watch for this year on the Norwegian continental shelf.

The consultant forecasts 35 exploratory wells across the sector in 2018, many related to near-field activity in the North Sea and around thedeepwater Aasta Hansteen gas/condensate complex in the Norwegian Sea.

Most of the frontier wildcat wells, however, will be in the Barents Sea where companies will look to improve on last year’s disappointing results.

Wood Mackenzie foresees total investments offshore Norway this year of around $15 billion. Capex will likely fall by 5%, but should climb back in 2019 when recent field investment decisions (FID) start to take effect.

The consultant anticipates five to eight further FIDs this year, including Garantiana, Cara, Nova (ex-Skarfjell), Brasse, Troll West Phase 3 (a subsea tieback to the Troll A platform), and Mikkel Sør in the Asgard area of the Norwegian Sea.

There will also be major brownfield projects at theJohan Sverdrup, Troll, and Snøhvit fields.

Next year there could be a resurgence in activity, with 30% of 2019 investment still to be sanctioned.

Following a record high for Norwegian merger and acquisition activity in 2017, M&A will likely to dip to around $4 billion, the analyst believes. The consultant expects the majors to continue divesting assets, possibly including Statoil.

The latter’s recent deals for Total’s operated stake in theMartin Linge project and with Petrobras for the Roncador field in the Santos basin could push its financial gearing above 30% in 2018.

A Norway divestment package might therefore help Statoil’s finances, although Wood Mackenzie does not anticipate any fire sales.

Interested parties are likely to include private equity-backed players and independents.

“And while the hype surrounding the Barents exploration campaign failed to deliver, this hasn’t dampened appetites for 2018.

“This year, explorers are poised to take another crack at the Barents and several FIDs are on the cards. There are questions around a lack of major greenfield project sanctions and the ability of the new wave of independents and private equity-backed companies to make their lofty ambitions reality.”