CARBO Ceramics Inc. has introduced KRYPTOSPHERE, which it describes as an ultra-conductive, ultra-high strength proppant technology engineered to maximize and sustain hydrocarbon flow at high closure stresses for the life of the well. 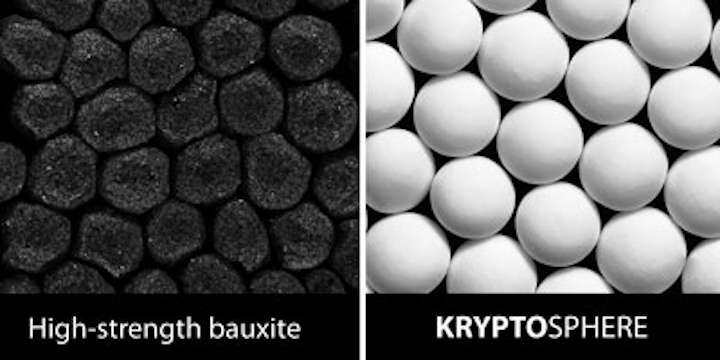 HOUSTON– CARBO Ceramics Inc. has introduced KRYPTOSPHERE, which it describes as an ultra-conductive, ultra-high strength proppant technology engineered to maximize and sustain hydrocarbon flow at high closure stresses for the life of the well.

Developed in response to a request from a major operator in the Gulf of Mexico, CARBO says that KRYPTOSPHERE is able to deliver more than twice the baseline conductivity of bauxite-based, high-strength proppants at 20,000 psi closure stresses.

Unlike other proppants that have imperfections and irregular shapes and sizes which reduce conductivity and strength, the company says that the new product’s precision-engineered microstructure translates into a stronger, more spherical, more uniform and smoother proppant that creates more space in the fracture for hydrocarbon flow as well as a more uniform flow path.

Kolstad added that the new product is “well-suited for the production enhancement demands of deep-water lower-tertiary, high-stress wells and other wells with these stringent conditions.”