Are oil prices too high? 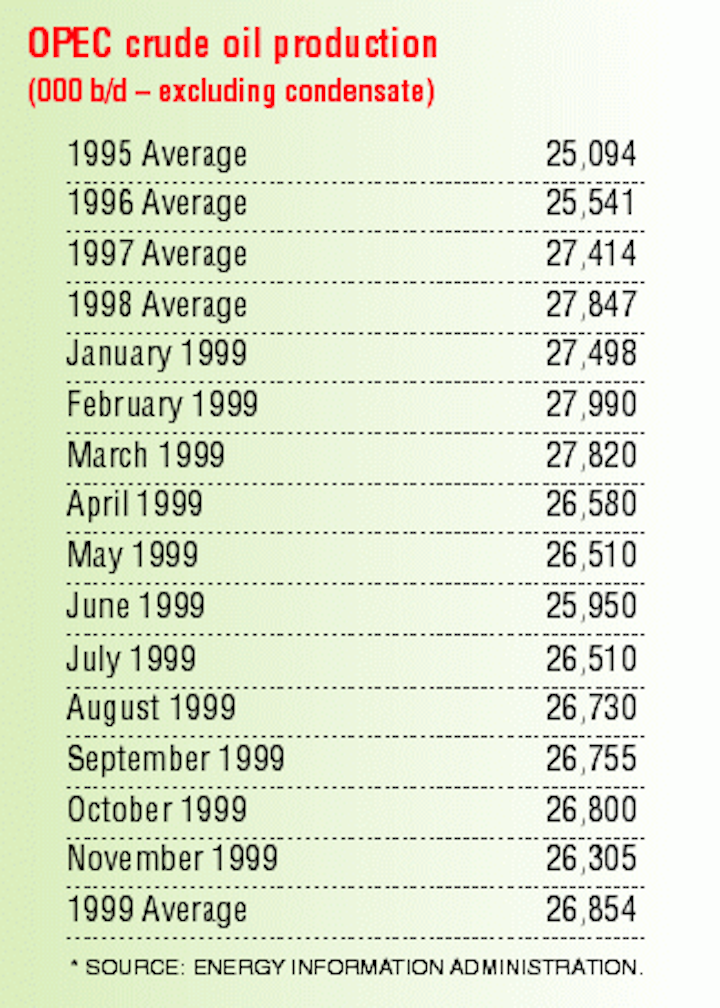 Are oil prices too high? A year ago the industry yearned for higher prices. Now that they're here, what do we do? Many individuals have expressed increasing concern over the rise in oil prices; some have deemed it a crisis. The turmoil is, of course, a product of OPEC production restraint, begun 10 months ago. The restraint drove up oil prices to levels not seen in nine years. Without a commensurate level of drilling, crude inventories worldwide dropped to some of the lowest levels in the past 10 years. As the OPEC countries continue to curb production, where will prices go?

If prices go any higher, demand curtailment might be triggered. On the other hand, if they begin to decline, how low will they go before demand begins to range out ahead of production?

In Iraq, an oil expert in the Oil Ministry said that as long as OPEC members stick to the prices agreed upon, oil prices will continue to rise - and most analysts agree.

Regardless of the performance of non-OPEC producers, it all comes down to OPEC collective actions. OPEC members say they want market stability and do not want to disrupt the market. OPEC meets this month and has not announced what position the group plans to take.

A source within the Iranian oil ministry said that OPEC would consider increasing pro duction at the meeting if the price of West Texas Intermediate futures holds at or above $25 - $26/bbl for "a period of time." Without such confidence, he added that OPEC's Ministerial Monitoring Committee might recommend that the group stick to the current supply cuts beyond expiration this month.

Crude oil export is becoming a major concern in the former CIS. In Aerbaijan, the problem is shortages. According to officials at Transneft, Russia's pipeline monopoly, Azeri state-owned SOCAR was forced to suspend oil exports to Russia because "it had no oil." As a result, the BP Amoco- led international consortium, AIOC, had to step in pick up the slack for the state company and consortium partner making the group the leading contender as the country's chief exporter to Russia.

AIOC signed an agreement with Transneft in place of SOCAR to export the oil. Under the agreement, AIOC was scheduled to ship 135,000 tons of oil through Novorossiisk until this month, but AIOC is having trouble meeting the volumes required. Transneft said oil deliveries from AIOC have now stopped due to oil shortages.

In Kazakhstan, the situation is just the opposite. The government is trying to limit producers from exporting crude. The government decided to limit oil exports to 440,000 b/d in 2000 in order to protect its refineries and ease a domestic fuel shortage. This has not made producers very happy.

Producers have been trying to export as much as possible to take advantage of high oil prices, leaving Kazakhstan refineries operating at one third of capacity. In addition, the government said that the producers are not making tax payments and is planning to tighten controls over export taxes. Knowing the impact that foreign investment has on the country's economy, Kazakhstan is in negotiations with producers to reach a consensus on the problem.

The US Export Import Bank has granted Pemex, the state oil company of Mexico, a loan of $498 million for investment in its oil fields. Pemex said it plans to use $411 million of the funding, on top of a previously borrowed $4.375 billion for the Cantarell Field. The remaining $87 million will be invested in the Grijalba Delta project. In addition, Pemex was granted $161 million for the Burgos project. To date, Pemex has been loaned a total of $1.278 billion from the international bank.

Unocal is continuing to experience succees in deepwater exploration off Indonesia. The company recorded two more deepwater discoveries on its acreage off East Kalimantan, Indonesia. The Gendalo-1 discovery well was drilled on the Ganal Production Sharing Contract area in 4,677 ft water depth. The well was drilled to 15,000 ft and encountered 242 ft of net gas pay in Miocene-age reservoirs.

Gross resource potential for the prospect is estimated to be 1-3 tcf. Earlier, the company drilled two other wells in the area. The first well, Gandang-1, was drilling 12 miles northeast of Gendalo and encountered 136 ft of gas pay in reservoirs similar in age to Gendalo. The Gan dang-1 was drilled to 13,350 ft TD in 5,524 ft water depth. The second well, Goda-1, was drilled on a stratigraphic prospect as a test of the same reservoir interval encountered in Gandang, but was dry.

Petrobras' international subsidiary, Braspetro, is planning an exploratory well off Cuba for the second quarter of this year. The Brazilian state oil company signed agreements with state-owned Cuba Petroleum in 1998 for exploration of the 3,000-sq-meter Block 50L off north central Cuba. Petrobras will cover all costs, and upon encountering a discovery, will form a joint venture with the state company. Petrobras has completed seismic studies and has begun moving in equipment.

To date, $600 million has been spend on exploration and development since Cuba opened its doors to foreign investment early last decade. So far, a number of heavy oil finds have been encountered offshore, but no medium or light oil has been found.