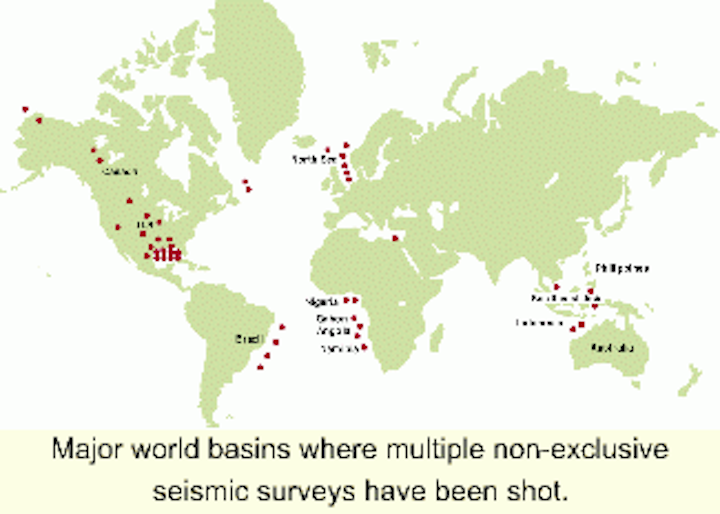 PART I: This is the first of a two-part series on the business of non-exclusive seismic data and the licensing contract controversy created by the recent wave of industry mergers. Part II will appear in a subsequent issue.

The advent of the modern non-exclusive data business has had a profound effect on the petroleum and geophysical industries. The process has reduced dramatically the price of seismic data, while at the same time, significantly improved seismic quality. It has changed the scope of detailed, high-resolution seismic surveying from prospect-specific to basin-regional. As a result, it has made possible an unprecedented understanding of basin-wide petroleum systems and diversity of hydrocarbon potential within a basin.

In the petroleum industry, there are many types of data licensed under a non-exclusive model, in addition to seismic:

The rules and restrictions on the use of non-exclusive data are defined by a license contract, which must be executed by the licensee in order to obtain the use of the data. In brief, the license contract establishes that the data is the property of the owner, is protected by copyrights, and constitutes a valuable trade secret. The licensee of the data is granted the right to use the data to conduct internal business, but is prohibited from disclosing, transferring or copying the data to any other parties, including by means of asset sales or corporate mergers. The license contract ensures that the owner has the sole right to sell the data licenses to any and all interested companies, and it is only by this means the data may be used by any company.

To understand conceptually the licensing terms for non-exclusive seismic data, some have made the comparison to software licenses. There are certainly similarities between seismic and software licenses. However, on closer inspection there are many key differences. To illustrate this, contrast the differences between typical license terms for seismic data, workstation software, and personal computer (PC) software.

Non-exclusive seismic data is sold to an extremely small market in relative terms. Additionally, the client assumes the automatic right to the raw field data - broadly analogous to the source code for software - with the data. The license terms required on a product which is fully licensed typically less than 10 times, must necessarily be quite different from the license terms on a product which can be licensed thousands or even millions of times.

During the 1960s and 1970s, it was not uncommon for geophysical contractors to acquire occasional 2D spec seismic lines in frontier areas, or small 2D spec grids over suspected prospects. Group shoots which ended up in contractors libraries were also common. However, spec data acquisition was purely a secondary endeavor for the industry during this period, and it was proprietary work that paid the bills. As such, the spec data libraries of the 1960s and 1970s were haphazard, and often of poor and inconsistent quality. Spec data was acquired as a hedge strategy when weather conditions were outside proprietary contract specifications, or other factors prevented contract work from taking place.

The seismic exploration methodology of the E&P companies during this period was trend and prospect specific. Data was acquired in pursuit of a specific play, and not in a systematic fashion designed to understand an entire basin in detail. Such large-scale regional surveying was beyond the reach of individual oil companies.

In the early 1980s, a few pioneering companies envisioned the enormous potential of large scale, high quality non-exclusive 2D surveys in the Gulf Coast Basin and the North Sea, and developed a business model to create them. This early effort proved successful and was very well received by the industry. It marked the beginning of the modern non-exclusive data business. Integrated geophysical companies, new specialized spec data companies, and data brokers ultimately became participants in the new business.

By the middle 1980s, significant quantities

of modern non-exclusive 2D data had been acquired and E&P companies were becoming accustomed to its attractive price, good design, and high quality. Then a series of difficult downturns rocked the industry and began a painful process of downsizing and technical outsourcing, which has continued unabated to the present day. This steadily increasing economic pressure on the industry changed the dynamics of the non-exclusive data business.

The lower cost of non-exclusive data became a means of survival for many exploration companies, and the primary driver for cost effective exploration across much of the industry. As a result, more and more of the geophysical business shifted from the proprietary business model to the non-exclusive model, particularly in the major offshore basins of the Gulf of Mexico, the North Sea, and offshore West Africa. The rate of data collection and capital investment increased.

As non-exclusive data libraries grew, the density of data coverage increased to the point that oil companies could not only use them for regional work but also for prospect specific work as well. For the first time, E&P companies could generate prospects across an entire basin and relate them one to another in detail via a regular, consistent grid of high quality data.

Acquisition technology and performance specifications on non-exclusive surveys were often more aggressive than on proprietary surveys. By spreading the cost of data collection over many sales, to several companies, this high dollar investment in quality was made possible. By the end of the 1980s, the majority of all marine 2D data in the world was being collected on a non-exclusive basis, and the business was fully developed.

At the same time the global 2D data libraries were being built, 3D seismic technology and methodology was rapidly evolving. By the latter part of the decade, the method was reaching full bloom. Major companies were logging an impressive track record of improved drilling success rates using 3D seismic. As technology brought the volume cost of 3D data down, several companies began to experiment with non-exclusive 3D data. Coarse sampling methods, 2-1/2D, were not well received. Small full fidelity 3D surveys, true 3D surveys, were well received by the market. The business took off initially in the Gulf of Mexico, where small block size and rapid acreage turnover proved to provide the correct mix of economy of scale and multiplicity of sales.

The shift from the proprietary to non-exclusive business model, and from 2D to 3D, continued into the 1990s. The growth of the 2D libraries began to decline, and the growth of 3D libraries increased dramatically. The industry moved much more rapidly to embrace the non-exclusive business model for 3D data. However, 3D data was much more expensive than 2D data. The capital investments in data being made by the geophysical industry in the 1990s were many times greater than the investments made in the prior decade. The industry-wide rate of investment increased throughout the decade.

By the middle of the 1990s, the non-exclusive business model was dominating 3D data acquisition in the Gulf of Mexico, just as it had 2D in the 1980s. In the North Sea, a fairly reasonable balance was reached between proprietary and non-exclusive models for 3D data. By the late 1990s, non-exclusive 3D surveys were being conducted in Asia, Australia, Africa and Canada.

Today, the geophysical industry is dominated by the non-exclusive data business. The vast majority of all marine 3D surveys acquired around the world, and a large proportion of the land and transition zone 3D data in North America, are being collected on a non-exclusive basis. Large non-exclusive 2D surveys, although less common, are still acquired in frontier marine basins, and onshore western Canada. They will continue to play a very important role in exploration. Proprietary 2D surveys continue at a steady rate.

The authors feel this overwhelming global shift to the non-exclusive model in 3D in the past two years is excessive, and is due more to the highly depressed state of the industry than to good investment fundamentals. This unhealthy trend must correct itself quickly in order to avoid long term damage to the geophysical industry.

Editor's note: This is a summary of a paper given at the IAGC Conference in Houston (November 1999).
Latest in Company News